Trump loves New York but has no reason to stick around and get fleeced and abused by officials there.

Trump has been a lifelong resident of the City that Never Sleeps, having played his role in LITERALLY changing the skyline of the city itself.

Not only that, he has been a pop culture fixture in the Big Apple since at least the 80s.

But as the Viscerally-left-of-center city continues to harden its stance against Trump. In July, he tweeted the following statement: 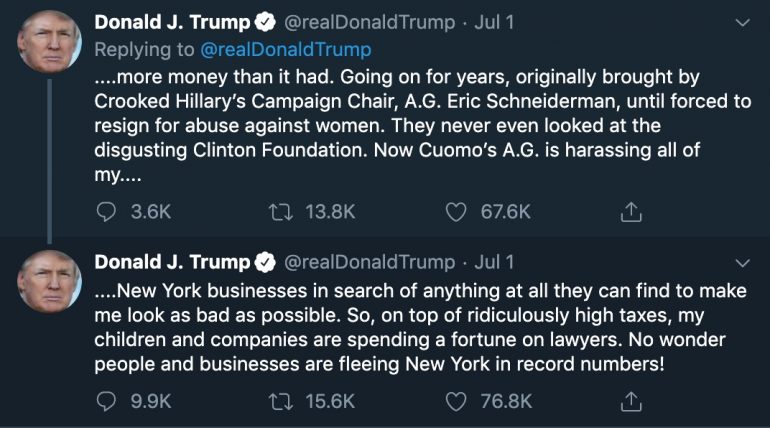 With a tweet thread like that over the summer, his most recent announcement should surprise exactly nobody.

“But unfortunately, despite the fact that I pay millions of dollars in city, state and local taxes each year, I have been treated very badly by the political leaders of both the city and state.”
Source: NYPost

As though to prove his point — and to show how tone-deaf NY politicians have become — their Governor made sure to take a snipe.

He might want to think twice about getting so cocky, since New Yorkers who are sick of getting fleeced by their government and having nothing to show for it have the option of living elsewhere. So much so that officials are challenging claims of out-of-state residency.

Like other high-tax states, New York’s Department of Taxation and Finance will go to great lengths to keep wealthy residents on their tax lists. The states’ methods can be aggressive: Issuing subpoenas to pore through credit card statements, bank transactions or phone records to track a taxpayer’s location, and sending auditors to interview doormen or confirm doctors’ appointments.

Welcome to Blue State Thinking — where you are an income stream first a citizen a distant second, if at all.

Where’s the President headed? Well, hopefully he’ll stick it out in DC for another 5 years or so. But one way or another, the President will be calling Florida his new home.

Fauci’s Words Come Back to Haunt Him
The Black Sphere