Some have said that the impeachment inquiry is one great big Rorschach test on what you think about President Trump — if you think he’s guilty, it’s damning. If you think that the Democrats are butthurt from the 2016 election and scared about Trump being reelected in 2020, then you don’t think that anything said has been questionable at all.

Personally, I think it’s all a big sham.

To me, it appears to be an attempt by Democrats and their buddies in the Deep State and the Media(D) to wrench back control from the bull in the china shop who is “doing everything wrong” by returning to Constitutional norms and separating powers that have been mingling over the last few administrations. It’s to punish those who dare think that the American people can make decisions about their leadership and the direction of the country that the elites don’t like. It’s a big message to right-leaning non-globalists: we must conform — or they’ll go after us. It’s one of those, “Nice Republic you’ve got there… it’d be a shame if something were to happen to it.”

They’ve been after Trump since Day 1.

Nutters like Rep. Maxine Waters(D-CA) have been itching to impeach President Trump for any possible reason. It was the emoluments clause, then Russian-collusion, Stormy Daniels, and now it’s all about Ukraine.

This impeachment has shifted more times than James McAvoy did when he played the crazy dude in that 2016 flick by M. Night Shyamalan. In just a few days, this impeachment inquiry has shifted from quid pro quo to “bribery” after some Democrat polling and the insistence of the Media(D) in changing the language.

WATCH: The liberal media has helped to create the "bribery" talking point for Democrats, and even helped coach them on how to use it. pic.twitter.com/YeKkhZ5Rgq

Nothing can be more clear that the Media(D) is out for the President than the way that they have handled Trump’s European Union Ambassador, Gordon Sondland’s testimony today and POTUS’s reaction to it.

(Note that at the time of writing, Ambassador Sondland’s testimony is ongoing.)

Key takeaways from Gordon Sondland's testimony so far:
• Says there was a Ukraine quid pro quo
• Says "everyone was in the loop," including Secretary of State Mike Pompeo and Mick Mulvaney, the acting White House chief of staff#ImpeachmentHearingshttps://t.co/F5AiRu5ydC

Here is the accepted narrative based on Ambassador Sondland’s testimony so far:

As Sondland testified that he worked to arrange a quid pro quo with Ukraine at the heart of an impeachment inquiry, President Trump emerged from the White House clutching a copy of the ambassador's testimony and handwritten notes to read in his own defense pic.twitter.com/24v6m94aOb

President Trump reacted. Many have said that he shouldn’t react to witnesses, but well, let’s face it, President Trump isn’t exactly the poster boy for restraint especially when it’s a direct attack against him.

Frankly, for someone who has been under attack since the day he was elected, has faced calls for his impeachment by political rivals, been heavily attacked daily by the Media(D), and has half of the country refusing to acknowledge him as the Commander In Chief, he’s actually shown incredible restraint.

He hit back today by directly quoting the “damning” witness.

The President just walked up to the WH press with his handwritten notes from the call with Amb. Sondland:

"It's all over!" Trump declares on Impeachment pic.twitter.com/ca85YE5eUu

Here is the testimony that President Trump was quoting directly:

Democrats love citing random conversations between random bureaucrats, but here's a direct quote from the actual President they absolutely refuse to acknowledge.

Yet, the Media(D) went straight to the “TRUMP CONTRADICTS SONDLAND!” headlines. 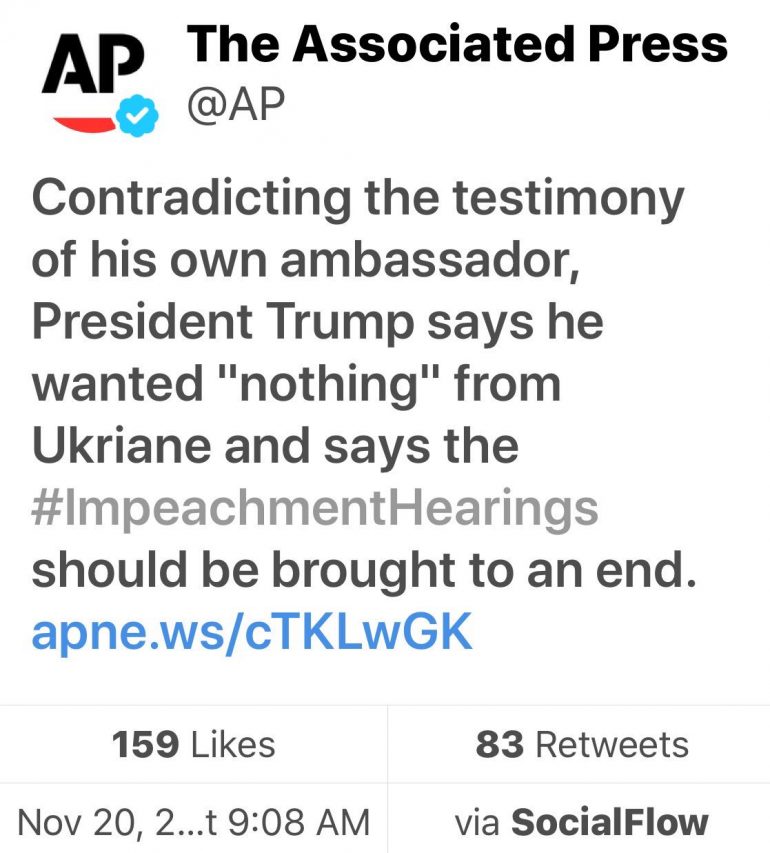 Less than one hour later, however… 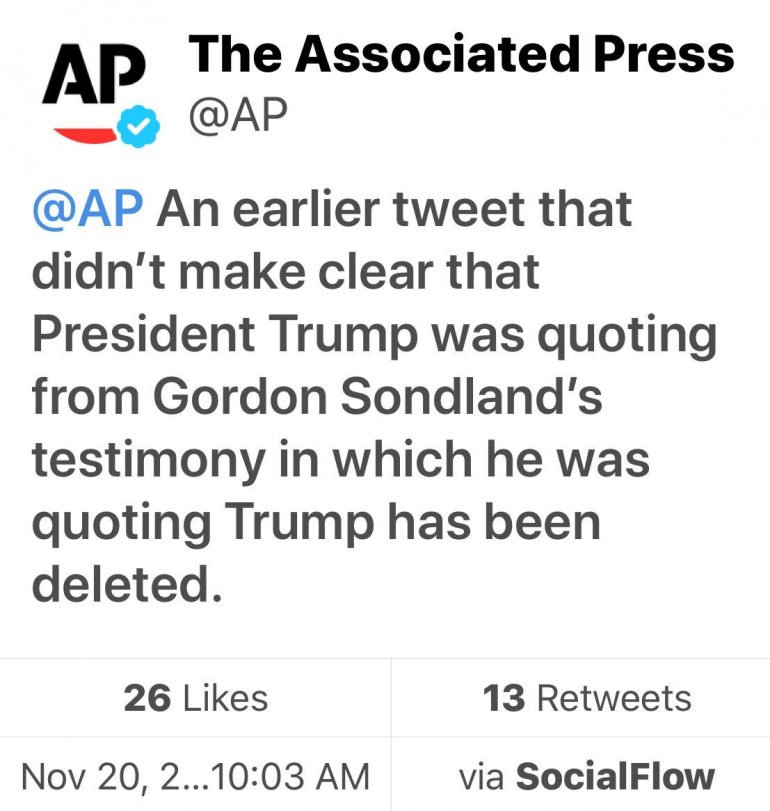 So, now let’s unpack this testimony a wee bit…

Ambassador Sondland testified that it was Rudy Giuliani’s request to get a public statement from Ukraine announcing an investigation into DNC servers and Burisma in order to get a White House visit that Sondland had considered that as quid pro quo. Sondland testified that he was opposed to withholding aid and that “Giuliani was expressing the desires of the President of the United States.” He then heard that the security aid was withheld and because he wasn’t given a reason that he was satisfied with, he “came to the conclusion” that the aid would not resume until the public statement was made, ergo it was definitely quid pro quo… at least in the mind of Ambassador Sondland.

Sondland: "Giuliani’s requests were a quid pro quo for arranging a White House visit for Pres. Zelensky…Giuliani was expressing the desires of the President of the United States, and we knew that these investigations were important to the president." https://t.co/QWDxvqfwDS pic.twitter.com/thpFxHW415

Rep. Mike Turner’s questions make this perfectly clear that this whole thing is based on Ambassador Sondland’s presumption of quid pro quo.

Sondland admits "no one on this planet" told him President Trump was tying aid to investigations!@SpeakerPelosi made a terrible tactical error pursuing partisan impeachment and allowing @RepAdamSchiff to lead it.

His ball of yarn is unraveling FAST. pic.twitter.com/Pu7i86N4rO

To sum up, Ambassador Sondland didn’t confirm his suspicion with anyone and then his conversation with President Trump directly contradicts his presumption.

And yet, you know that all of the headlines in the Media(D) will report the “Bombshell!” that Ambassador Sondland says that there was quid pro quo without admitting that this was all Sondland’s presumption.

Or how about Obama promising Russia “flexibility” on missile defense?

Or perhaps the Obama admin turning a blind eye on Hezbollah growing into a billion-dollar-a-year crime syndicate by trafficking drugs and weapons while committing other crimes in order to protect the crappy Iran deal.

Should they have been impeached for any of those?

Biden’s latest whopper: My great-grandfather was a coal miner
May 18th, 2021 Liberty Unyielding