You’d think a guy who spends so much time claiming the moral high ground, would be more careful about playing shady tricks like this.

The dangerous game you play when you pretend to be everyone’s moral superior is that it’s a long way down when you finally crash back to Earth.

That’s a lesson that Preachy Pete is about to learn.

He just stepped in it big-time, making a bogus claim about ‘400 black supporters’ many of whom were neither black nor supporters.

Here is an image of the press release where he was bragging about this support. Too bad for him, it isn’t real.

With his failure to pick up much minority voter support, that’s going to pose a real problem for him. Even more so, now that he’s screwed the pooch with this press release. 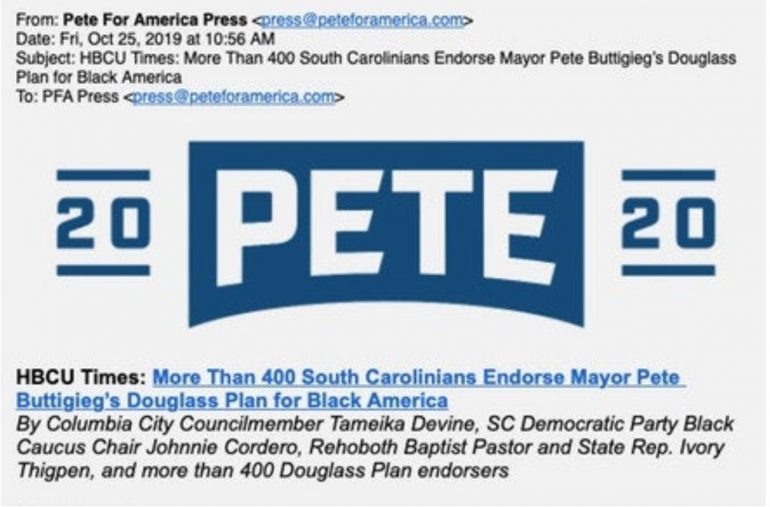 Even the hard left-wing site ‘Slate’ hammered him over this:

The link goes to an article in the HBCU Times—HBCU stands for historically black colleges and universities—which is credited to the three prominent black South Carolina figures above “and more than 400 Douglass Plan endorsers.” The article praises the Douglass Plan’s proposed spending programs and legal reforms, arguing that “there is one presidential candidate who has proven to have intentional policies designed to make a difference in the Black experience, and that’s Pete Buttigieg.”

The political usefulness of such a document is obvious for Buttigieg, who is polling very poorly with black voters both nationally and in South Carolina, which holds the fourth Democratic primary/caucus and has a majority-black Democratic electorate.

A problem: When the Intercept dug into the endorsement, it found that two of the three top-line black politicians listed say they never endorsed the Douglass Plan, and that at least 40 percent of the other 400 individuals whose names are listed are white.
Source: Slate

Pete Buttigieg’s campaign sent out an email telling people they needed to opt-out of being on the endorsement list.

This is not how is works. pic.twitter.com/s4SruVCXiE

One of the worst parts is that one of the names Pete Buttigieg’s campaign used is Johnnie Cordero.

Johnnie Cordero is the Chair of the South Carolina Black Caucus.

They really thought he wouldn’t notice.

He’s floundering pretty badly with that demographic and screw-ups like this are not going to help him out.

Wait a minute, in this email the Buttigieg campaign *does* explicitly claim the list of 400 are all back South Carolinians! Holy shit, the lies. https://t.co/xRLVsJgBIJ

Here’s the gist of the Intercept article Slate cited:

In July, he released his campaign’s chief piece of policy outreach to black voters, called “The Douglass Plan: A Comprehensive Investment in the Empowerment of Black America.” The plan covers everything from criminal justice reform to public health care, education, and beyond. It proposes using federal contracting rules to increase the amount of contracts going to minority- and women-owned firms to 25 percent, and offers student loan deferment and forgiveness to Pell Grant recipients who go on to start businesses that employ at least three people.

…When pressed on the lack of black support, Buttigieg and his campaign have made repeated references to the Douglass Plan, named for abolitionist Frederick Douglass. “Our response to those who ask what our agenda for black America is, is the Douglass Plan.” Buttigieg said recently on CNN. “It is the most comprehensive vision put forward by a 2020 candidate on the question of how we’re going to tackle systemic racism in this country.”

…Asked if she knew if any of the black supporters of the plan were also supporters of Buttigieg, she said she wasn’t sure. “The only ones I really knew were me and Rep. Thigpen,” she said. “I don’t know many — actually, now that I think about it, other than the folks working on Mayor Pete’s campaign, I don’t know of any local elected officials who have endorsed him yet.”
Source: Intercept

One of the names Preachy Pete’s campaign claimed as a supporter is actually a Bernie bro. #awkward.

WATCH: Preachy Pete Buttigieg Says That The Bible Can Be Interpreted To SUPPORT Late-Term Abortion

‘REPENT’: Preachy Mayor Pete Called Out By His Own Evangelical Brother-In-Law