We’re seeing some pretty cagey stuff considering nobody in the room supposedly knows the whistleblower’s identity.

Today’s two witnesses were answering the questions, as usual, and Schiff kept his interruption streak going by jumping in while Nunes was asking Lt. Col. Alexander Vindman about the two people with whom he had shared the information.

Did you discuss the information about the July 25th phone call with anyone else outside the White House, and if so, with whom? He had already asked the very same question to the other witness.

Vindman had already named one of the two people and the moment at which he was about to share the name of the agency with whom the second person worked, Schiff intervened.

Nunes: Did you discuss the July 25 call or July 26 call with anyone outside the White House?

Vindman: George Kent, and someone in the intelligence community I'm not going to name.

Schiff interrupts to "protect the whistleblower."

Shortly thereafter during the same questioning, Vindman’s lawyer advised he not answer any other related questions. Nunes pointed out that this was, in fact, a hearing of the Intelligence Committee, but they deferred to the instructions of Shiff to shut down.

Shiff pretends not to know who the Whistleblower is — despite his own staffers having met with him, and having obviously coordinated with him.

Rep. Nunes asks Lt. Col. Vindman how he would know if he's outing the “whistleblower” if he doesn't know who the "whistleblower" is.

"I've been advised not to provide any specifics on who I have spoken to with inside the intelligence community." pic.twitter.com/dzyaf6PNCW

Roger Stone just got convicted on that very charge#ImpeachmentHearing 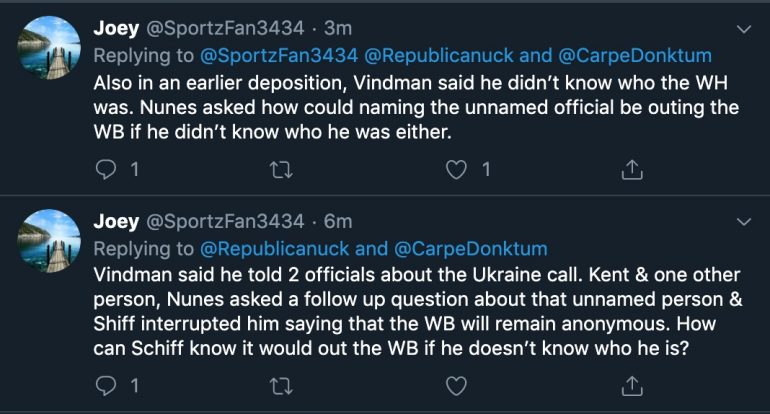