It all began with an innocent little tweet of a meme… and everyone went crazy!

It didn’t even have a caption, it was just a photoshopped picture. (That was for the benefit of the Washington Post which can’t seem to tell when something is photoshopped.)

His detractors would say that is because he “broke” the norms, but really, he has exposed the ridiculous circus that we have in Washington.

The left is going bonkers because he is savvy at social media use and has an actual sense of humor. He also knows what a good meme is and how powerful it can be.

Remember when he tweeted that Nickelback meme to hit at Joe Biden’s claim that he never spoke to Hunter about his position on the board of Burisma?

Everyone lost their minds — including Nickelback.

What the fuck is this fuckery? pic.twitter.com/8kyAQDOXR3

Alyssa is clearly triggered. So was comedian George Lopez who should have been able to identify a joke when he saw one.

Clearly both of you have taken too many blows to the head #cmon RT @realDonaldTrump: pic.twitter.com/uvNPBgPFNk

Hollywood #Resisters weren’t the only ones. This triggering session was bipartisan. 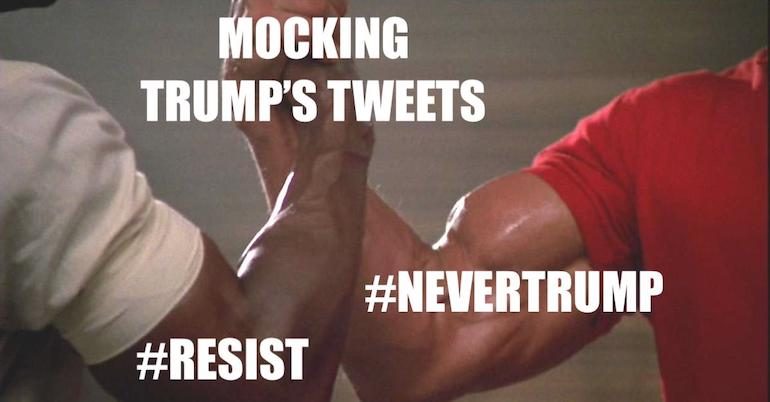 The replies were all tired and predictable. Russia! Putin! Racist! Sexist! Mental illness! And, of course, fat-shaming. So. Much. Fat-shaming. Which, if you think about it, is a bit weird for the wokescolds that keep telling us that big is beautiful and promoting a healthy diet and exercise is essentially a hate crime. Did they forget about the “body positivity” movement that has been pushed by the morbidly obese in the last few years?

Leftists are quick to abandon their principles if it means that they can attack President Trump.

So are the gatekeepers of conservatism that refuse to support Trump because of his scandalous past — despite his policies which have been quite conservative, pro-life, pro-law enforcement, and pro-religious freedoms. These are all things that the NeverTrump peeps claim are the important things. Yet, they’re engaging with his tweets which they claim to hate.

There are 1,000 things I am sure I could say about this jaw-dropping moment of presidential insanity, but for the life of me, I am too stunned to think of any of them. pic.twitter.com/OdEezNS6A3

I think @realDonaldTrump is traumatized by the impeachment proceedings. His mental capacity is deteriorating everyday and he’s totally unfit to be the commander and chief. #TrumpNeedsHelp https://t.co/ZCbhQ511sw

You do realise that Rocky lost in the first movie, you total utter muppet @realDonaldTrump ? #ImpeachmentIsComing pic.twitter.com/OD4LATnxnN

Ignoring the spectacularly embarrassing fact that you're tweeting fan art of yourself, @realDonaldTrump … Given your allegiances, shouldn't you have picked a photo of Ivan Drago? https://t.co/lyVHMo5AIU

The war on thanksgiving is real, y’all.

I give you @realDonaldTrump’s fantasy of himself as a fit fighter *shared publicly.* I, for one, have lost my appetite. pic.twitter.com/9lRfk42Nqy

just putting this right here because the title of this book is the perfect response to a tired old doofus posting fan-art of himself #ad https://t.co/bHZVHSqZtO

Here, I fixed it for you, you disgusting jelly-filled traitor. pic.twitter.com/c037CJrjJy

In the name of the great city of Philadelphia, I order you to take this down.

I think you should resign and work full time on your
six pack which has morphed into a beer keg. pic.twitter.com/mcSGIdCgf3

There is a slight resemblance..??? pic.twitter.com/wel9uQMLwt

Do you honestly think that all this is gonna go away? That somehow you’re gonna be ok? That you’re gonna escape justice, live out your term and be re-elected? You’re delusional. Face it: you’re totally fucked. It’s over. The only way out of this SHITSTORM is to RESIGN. #Trump pic.twitter.com/eBLzX1iepE

But there were also lots and lots of people that absolutely loved it!

Our President has the best sense of humor ???? @realDonaldTrump you ARE a Champion in every way! ??❤️??? https://t.co/gMBBKBGsfI

Best tweet ever. Liberal heads are exploding everywhere. I love it.

Wait til CNN fact checks this meme as false.

I’m embarrassed at how hard this stuff makes me laugh.

Trump ready to fight for Thanksgiving just like he fought for Christmas pic.twitter.com/k3sWK7IVsH

Everyone losing their minds when Trump tweets is just the best!