When the story involves law enforcement vs meth dealer, it’s easy to know who to cheer for. Until a tracking device muddies the waters.

A man in Indiana found a weird device attached to his car. He removed it. And then all Hell broke loose.

Warrick County Sheriff’s Office investigators attached the tracking device to suspect Derek Heuring’s car in July 2018 after obtaining a warrant based on a tip from a confidential informant that the vehicle was involved in methamphetamine distribution, Ars Technica wrote. However, the device stopped transmitting a bit over a week later, with police guessing that Heuring found it and removed it. After waiting for 10 days to see if it turned back on, they obtained a second search warrant for Heuring’s residence—using the supposed theft of the tracker as probable cause. There, police discovered methamphetamine, paraphernalia, and the missing GPS tracker.

Authorities charged Heuring not only with drug dealing, but for theft of their equipment. The case has not yet reached a verdict, with Heuring’s defense team raising an interlocutory (mid-case) appeal to determine whether any theft occurred and/or the second warrant was justified. A lower appeals court found sided with police, but the Supreme Court has the final say.
https://gizmodo.com/indiana-supreme-court-sure-looks-skeptical-that-taking-1839952699

On a tip, law enforcement attached a tracker to the suspect’s car. So far so good, right?

The tracker stopped working. Because the suspect discovered it. It had no bright red sticker saying it was the property of the local police department or anything. It was just a creepy tracking device. He took it off and took it inside.

Here’s where things get weird.

When the device stopped working, police alleged ‘theft’ of the device and used that as the predicate for a warrant for the suspect’s home. Once inside, they found various drug paraphernalia.

How is the removal of an unmarked tracker ‘theft’, and how does that rank as probable cause.

Leave aside for a moment this guy was involved in drug trafficking. Imagine it was someone you know, and police found a stack of torn mattress tags or whatever. Should the removal of a tracking device from your vehicle count as ‘theft’ — or worse — justification for searching a private home?

The judge obviously grappled with exactly that same issue:

“I’m not looking to make things easier for drug dealers,” Justice Mark Massa added, according to the Journal Gazette. “But I have an obligation to leave it on and let them track me? And I am also subject to a search of my home?”
Source: Gizmodo

A verdict has not yet been announced.

It’s exactly this sort of fast-and-loose-with-the-rules stuff that led to government spy organs being loosed against a presidential campaign. ‘It’s ok when WE do it because…’

Meth or no, should the evidence discovered by way of that particular warrant be used against the accused when the ‘problem’ was the removal of an unmarked foreign object attached to your private vehicle?

Or do we look the other way when a drug dealer gets nabbed? 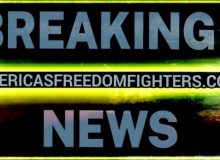