Senator Elizabeth Warren(D-MA) wants to “eat the rich” but only the very, very rich… just not her.

In a new campaign advertisement, Warren goes after four billionaires that have criticized her wealth tax which would impose a tax on them based on their net worth.

This comes just a week after her campaign launched a “Calculator for the Billionaires” after Bill Gates pushed back on Warren’s wealth tax.

The wealth tax has been become a center of her campaign, with supporters often changing “2 cents” in reference to the 2 percent tax at her rallies.

Warren has said the tax would fund much of her progressive platform, including her universal pre-K and student loan forgiveness proposals.

The new ad features Warren speaking to a cheering crowd at a campaign rally, “It is time for a wealth tax in America. I’ve heard that there are some billionaires who don’t support this plan.”

The ad then cuts to clips of billionaires Leon Cooperman, Joe Ricketts, Lloyd Blankfein, and Peter Thiel as they critique her wealth tax.

“So here’s the deal: you built a great fortune? Good for you,” says Warren, “I guarantee, you built it at least in part using workers all of us helped pay to educate, getting your goods to market on roads and bridges all of us helped pay to build. We’re Americans, we want to make these investments. All we’re saying is when you make it big, pitch in two cents so everybody else gets a chance to make it.”

Some of Warren’s supporters seem to think that Bill Gates is just like Scrooge McDuck and has a vault filled with his billions of dollars that he swims in on occasion.

You’d think that someone with a net worth of about $12 million would understand what “net worth” means.

A tax on net worth means that the billionaires would be taxed on after-tax money that includes the valuation of their business, sales, investments, and assets held. So, say a billionaire has a rough year — it’s been known to happen — what happens then? They can either pull out of the stock market and everyone suffers, or sell their assets. This is after the top 1% already pays the vast majority of the taxes in the United States.

It’s a clawing back of what they have to pay for… what, exactly? Student loan forgiveness? Universal preschool? Medicare for All? More government programs.

I’m no billionaire, but I think this is dumb.

Thanks, but no thanks, Liz.

Cooperman, a billionaire investor, hit back at Warren’s ad, which also called out the Omega Advisors CEO for being charged with insider trading.

Cooperman settled with the U.S. Securities and Exchange Commission in 2017 and paid nearly $5 million in fees.

“In my opinion, she represents the worst in politicians as she’s trying to demonize wealthy people because there are more poor people than wealthy people,” Cooperman told CNBC.

“As far as the accusations of insider trading, I won the case,” he continued. “She’s disgraceful. She doesn’t know who the f— she’s tweeting. I gave away more in the year than she has in her whole f—ing lifetime.”

Despite being critiqued by the über-wealthy, Warren’s team is embracing the conflict with billionaires. Her team has decided to use the “Ok, Boomer” meme to hit back as though being a billionaire is an insult.

They’ve even expanded to marketing a “Billionaire Tears” mug on her campaign website.

The @ewarren campaign is now selling a $25 “billionaire tears” mug.

“Savor a warm, slightly salty beverage of your choice in this union-made mug as you contemplate all the good a wealth tax could do.” pic.twitter.com/cfMTK0iE2K

…which is owned by Tobi Lütke, a billionaire. 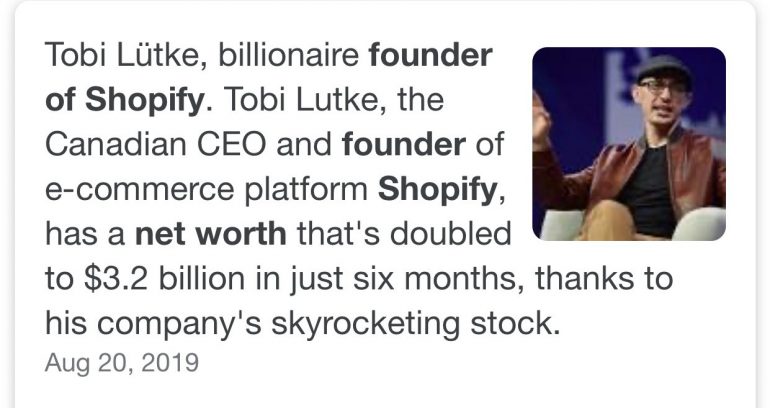 Maybe those tears are actually tears of joy — at least for the Canadian billionaire who won’t be subjected to Warren’s wealth tax.