How successful has Trump been at bringing the illegal immigration surge under control? So successful that it could be a counterpunch to the impeachment proceedings.

Princeton Policy Advisors’ blog has some glowing praise for the success of Trump’s policy and diplomatic efforts in stemming the surge of border jumpers.

Not like the President would have to share the credit with the do-nothing shmucks in Congress who sat on their hands when it was time to act.

Customs and Border Protection report that 35,444 persons were apprehended crossing the unsecured US southwest border in October. This was about 5,000 less than the previous month and essentially average for the last decade. It was also about 1,500 below our forecast for the month.

Almost all of the improvement, as in the last several months, has come from the ‘families’ category. That is, traditional illegal border jumping has not much changed, but families, particularly from the Northern Triangle countries of Honduras, El Salvador and Guatemala have been effectively deterred from attempting to cross Mexico into the US.
Source: PrincetonPolicy

This particular graph is interesting because it notes the relevant policy changes on the timeline. 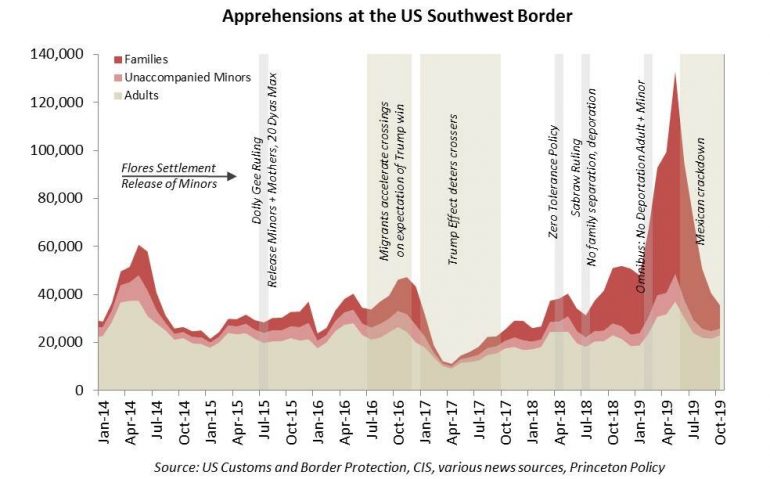 At the same time that number has come down, another, less obvious number has come down with it. The total number of foreigners applying for entry through lawful ports of entry, but turned away as ‘inadmissibles’ has also dropped, despite having been at one point well above the 10-year average.

This graph puts it in pretty dramatic terms that even a Pelosi Democrat would have trouble disputing. 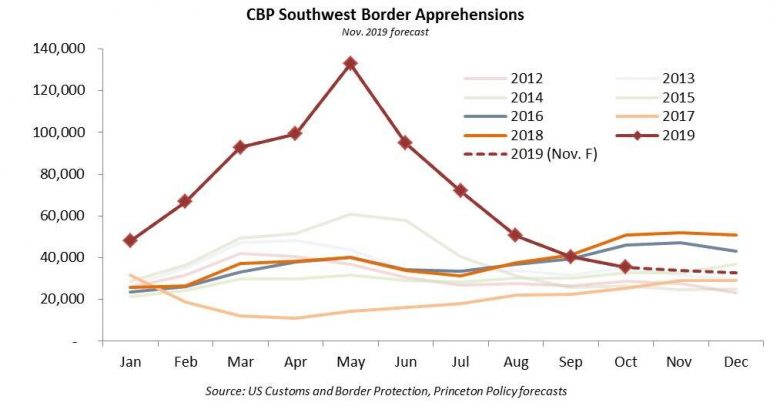 The really interesting twist in the report is the counterpunch we mentioned at the outset:

The border appears to be coming back under control in terms of new apprehensions. Of course, there is still a massive backlog in the courts and with respect to migrants being held under various auspices, but the incoming flow has now normalized to more typical levels, and as last month, President Trump can take the credit.

If President Trump wants to improve his odds with impeachment proceedings, he would do well to go on the offense — for example, with market-based visas or some other interesting new initiative — to demonstrate that he is still on the job and working to develop new approaches to ongoing issues. It wouldn’t be hard to draw up a list of interesting projects.
Source: PrincetonPolicy

That would be an interesting way to take back the initiative and narrative now, wouldn’t it?