Does this mean that synthetics are out and animal skins are back?

Because… that wouldn’t be completely awful. Leather and suede jackets can be pretty amazing.

Somehow, I have a feeling that’s not what they mean, though.

What they really mean is that the folks that you get a dose of climate alarmism along with your next purchase of pants. Also, various members of the fashion industry get to sit at the Cool Kids’ Table and fangirl over Greta Thunberg at the United Nations’ COP25 conference in Madrid.

Retailers and industrial groups say they will expose the conclusions of the Fashion Industry Charter for Climate Action (Ficca), signed last year by 43 companies, in an effort to tackle critisism which sees the fashion industry accused of encouraging over-consumption, excessive waste generation, hazardous chemical use and worker exploitation.

It is estimated some 73 percent of textile fibers used to produce more than 100 billion garments each year around the world end up in landfill or incinerators after they have been used.

Iconic UK brand Burberry sparked a furor last year when it admitted it had destroyed almost $40 million worth of unsold goods on the simple premise that the items were no longer in fashion.

Yes, indeedy. It seems that the industry that is known for using sweatshops in jurisdictions that have no labor laws to churn out cheap, disposable garments at the expense of human rights is now going to be taking the moral high-ground in “climate action.”

How about they work on not exploiting children before committing to leading the charge to save the world for the future of the children that they are currently exploiting?

Or maybe work on not creating garments that can only be worn for the runway and then discarded creating massive amounts of waste.

Last year, Fabscrap, a non-profit group committed to reducing textile waste in the fashion industry, picked up 150,000 pounds of fabric scraps to recycle or reuse — and that was just in New York.

The excessive waste, plus over-production, and hazardous chemical use causes one heck of a carbon footprint. Not to mention that those aforementioned sweatshops in “developing nations” are not just known for human rights violations, but they’re not exactly the safest and “greenest” places on the planet.

If they really believe that man-made climate change is an “extinction-level” threat, then the fashion industry really should be doing more.

In April of this year, CBS News reported that the global fashion industry’s carbon footprint is higher than the airline industry.

To be fair, the Fashion Industry Charter for Climate Action has some laudable goals if they’re looking at reducing the massive carbon footprint. it will likely mean that the cost will go up for customers as they transition to more expensive production methods to reduce reliance on fossil fuels.

Among the companies that signed the Fashion Industry Charter for Climate Action are industry giants such as Adidas, Burberry, El Corte Inglés, Gap, H&M, Inditex, Kering, Levi Strauss, Nike, PVH, Puma or VF, among others.

In addition to fashion distributors, the pact is also signed by textile manufacturers and associations such as Sympatex Technologies, Peak Performance Production, Paris Good Fashion or the French federation of Prêt à Porter Féminin.

This isn’t just about cleaning up their own messes, though. The fashion industry has joined together to commit to activism.

The industry charter specifies the following overarching areas of work to be further developed by specific Working Groups:

The big question is — does any of this even matter? Will all of these commitments to “do better” mean a darned thing while China continues to open coal plants daily? According to The Guardian, the world isn’t on track to meet the goal set out in the Paris Climate Agreement.

We can sit here and argue until we’re blue in the face about whether or not anthropogenic global warming is real and if it is able to be stopped, what the record cold means for global warming, and if changing our entire systems to stop a possible global temperature increase of 1.5 to 2 degrees Celsius is even worth it — but that won’t get us anywhere.

The fact is that current “climate action” solutions have taken on the goas of overthrowing capitalism and promoting leftwing political and social policies.

Yet, it seems that the purveyors of these dire warnings are often not living the sustainable lives that they lecture the rest of us to live.

…and then they tell us to “Please, think of the children”! 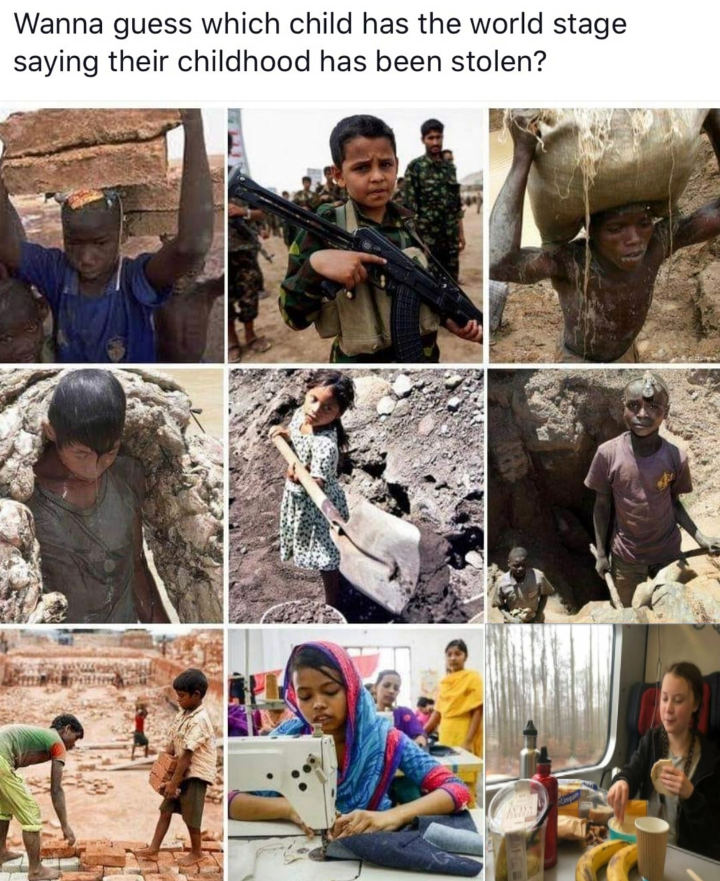 This is the same as in the fashion industry that is well-known for its excesses, extravagances, and disregard for actual human rights.

All of these commitments to “lead” in climate action because someone needs to “think of the children” would sound a helluva lot better if they weren’t running child labor camps stealing the childhoods of innocent kids just to increase their profit.

When the fashion industry starts taking human rights seriously, then I might listen. Until then…