Pelosi is charging ahead, damn the torpedoes. Trump dares her to get on with it.

Pelosi found her way back into the spotlight after a pathetic day of hearings that did not push the ball down the field for her team, reframing it by declaring victory in an obvious defeat.

Claiming the case against Trump has been well and duly established, and that the ‘facts are uncontested’ she’s charging ahead with impeachment papers.

A reporter asked her an uncomfortable question:

WATCH: Nancy Pelosi says she doesn't hate President Trump… and then proceeds to call him a "coward," "cruel," and "in denial."

Pelosi then said she had "a heart full of love." pic.twitter.com/K30ccPyMuy

Mark Meadows made an interesting observation.

1) Asked about key moments of the impeachment "investigation," she brings up polling

2) When asked RE: the speed of impeachment, she says "Mueller was appointed 2.5 years ago"

This is all about politics, and has been since 2017 pic.twitter.com/jsTrV1Pjaj

And what about Trump?

It’s no surprise, the man lives for the battle.

We’re finally getting to a phase where the President will be able to punch back at these fools. His response came by way of Twitter. (Naturally) 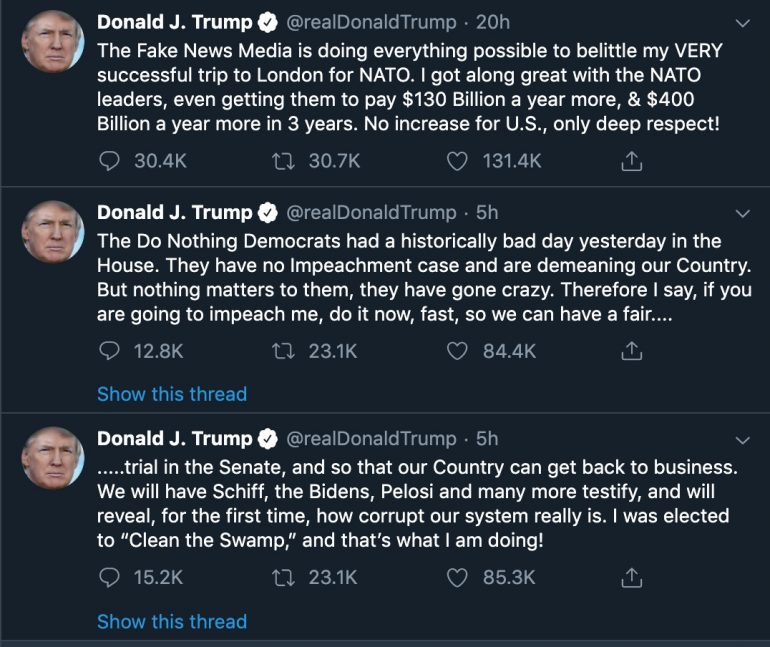 The Fake News Media is doing everything possible to belittle my VERY successful trip to London for NATO. I got along great with the NATO leaders, even getting them to pay $130 Billion a year more, & $400 Billion a year more in 3 years. No increase for U.S., only deep respect!

The Do Nothing Democrats had a historically bad day yesterday in the House. They have no Impeachment case and are demeaning our Country. But nothing matters to them, they have gone crazy. Therefore I say, if you are going to impeach me, do it now, fast, so we can have a fair…

…..trial in the Senate, and so that our Country can get back to business. We will have Schiff, the Bidens, Pelosi and many more testify, and will reveal, for the first time, how corrupt our system really is. I was elected to “Clean the Swamp,” and that’s what I am doing!

And so, the fight we all knew was coming is about to heat up.

15 of the Craziest Coincidences Ever Caught On Camera
July 13th, 2020 Brass Pills

23-Month-Old Boy Dies After Being Repeatedly Punched in the Face by Attacker in Chicago
July 11th, 2020 Big League Politics