How are people still taking this bigoted race-baiter seriously?

Al Sharpton has made a career out of rushing to judgment and blaming racism for all sorts of things. He pushed the Tawana Brawley rape hoax where teen girl claimed that she was raped by four white men, (two of whom she claimed were law enforcement officers,) had racial slurs written on her, was covered in feces, and dumped in a trash bag.

As awful as that was, and that it was fanning the flames of racism between white law enforcement officers and the black community, it’s still an amateur move for race hustler, Sharpton.

His magnum opus (if you can call it that) is the vile anti-Semitism on display in 1991 in Crown Heights, Brooklyn that led to several murders and fostered the anti-Semitism that is alive and well in the area today.

Sharpton has stated that he’s privately apologized to the Jewish community leaders for his role in ginning up the black populous of Crown Heights against their Jewish neighbors in 1991, but his statements which were very public at the time are still out there and he hasn’t given a clear public apology. In 2011, Sharpton wrote a reflection on the “mistakes” he made and what he learned after his role in inciting the Crown Heights riots, but… he hasn’t really apologized for his anti-Semitic utterances.

Somehow, this idiot thinks that he should weigh in on the bloody attack in Monsey as well as the violent anti-Semitic attacks in the area.

The daily attacks on people of the Jewish community is horrific. We all must respond as we would want to see if we were the targets. Stand!

Rev. Al Sharpton on Hanukkah attack in Monsey, NY: "We cannot remain silent as we see a consistent pattern of attacks against people based on their faith."

Normally I’d praise Sharpton for these words because he’s right — all identity-based hatred is wrong. I’m not a big fan of hatred, period.

But here’s the thing — I don’t think he’s sincere.

The guy said, as he stoked the Crown Heights riots and was being criticized by the Jewish community, “if the Jews want to get it on, tell them to pin their yarmulkes back and come over to my house.”

I wonder if they’ll also get Sharpten’s buddy to give his opinions about the Hanukkah attacks?

Here are the statements that @capeandcowell tweeted: 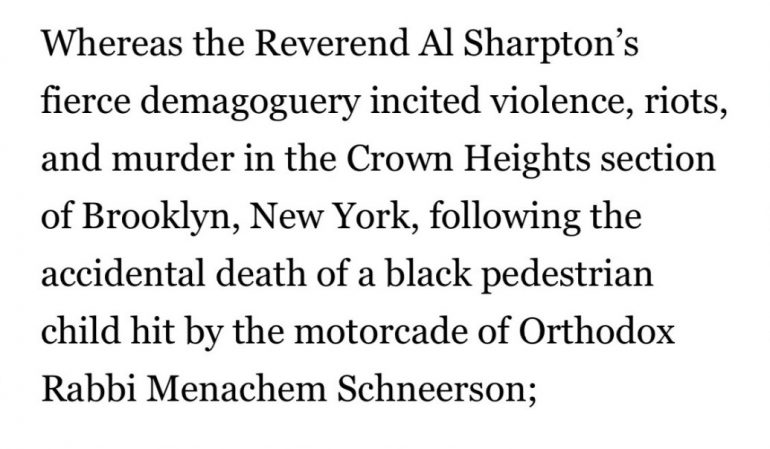 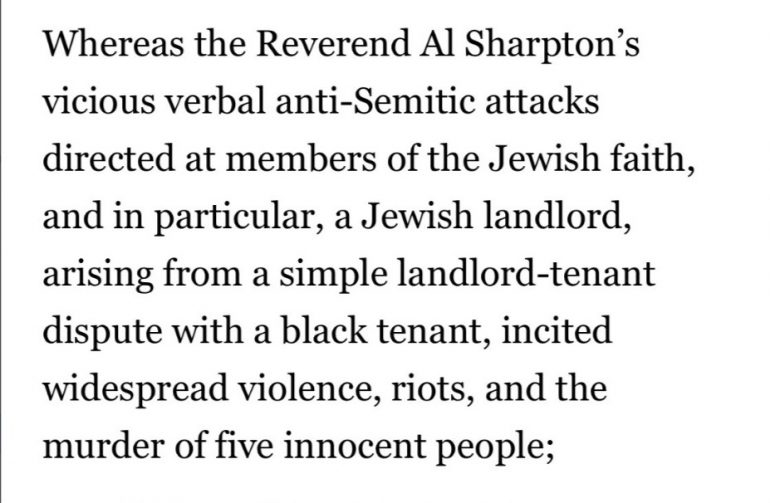 Gee, some of that reminds me of someone…

But Al Sharpton is his own sort of disgusting, and still, Democrats trip over themselves to get a good word from “the King-maker” Sharpton.

"The most recent assaults on Jews" in Crown Heights "have not (yet) been on the scale of…the 1991 Crown Heights pogrom. But nearly every Democratic candidate has been eager to be photographed with the organizer of that pogrom…Al Sharpton." https://t.co/71bf7xvGr4

The Left’s promotion of unrepentant antisemites like Sharpton…what could go wrong? https://t.co/Qwv3bFAO7C

“We cannot remain silent as we see a consistent pattern of attacks on people based on their faith and who they are."
—@TheRevAl 12/30/19

"As a black man, I am offended when white people take the likes of Al Sharpton seriously—or pretend to."
—@ThomasSowell#HannukahStabbings pic.twitter.com/dXrIe0u45K

The ongoing violent targeting of Orthodox Jews in NYC is directly related to Al Sharpton and Louis Farrakhan, but we are not allowed to discuss it further. ?☕ pic.twitter.com/kREmVEcVf2

Massive surprise that de Blasio elevated Al Sharpton to essentially co-mayor and terrible things happened to NY’s Jewish community. All of this is so shocking, who could have predicted.

Maybe, just maybe Al Sharpton should sit this one out.