In an impeachment process whose results in both houses was known even before arguments were presented, one of the few unknown questions was whether witnesses would be called. Well, now we know.

After an insufferable wait of listening to the same tired arguments over and over, and the scolding showboating by the Schiff weasel team, this stage has finally come to an end.

Just before suppertime on Friday night, the Senate finally took a vote on whether we should or should NOT hear from new witnesses.

This was the only real drama that was left in the clown show, and the media milked it for all it was worth.

With the Senate split 53-47, all the attention fell upon the four Republican Senators in the most vulnerable (read: ‘Blue’) States.

To the surprise of nobody, the most annoying Democrat in the Senate was the first of the four to crumble… Mittens Romney.

That left two others until after the close of questions last night, when Lamar Alexander announced that he did not need further evidence to arrive at a decision.

That set up a count of 49-50 with one undecided going into today.

If Lisa Murkowski voted ‘no’ to more witnesses, case closed, and the Senate moves forward to whatever is next. If yes, that would open up a world of drama as we figure out how to decide a tiebreaker with Mike Pence sitting recused.

Since she cannot speak from the House, she answered that question with a tweet-thread.

(2/5) The House chose to send articles of impeachment that are rushed and flawed. I carefully considered the need for additional witnesses and documents, to cure the shortcomings of its process, but ultimately decided that I will vote against considering motions to subpoena.

(4/5) It is sad for me to admit that, as an institution, the Congress has failed.

It has also become clear some of my colleagues intend to further politicize this process, and drag the Supreme Court into the fray, while attacking the Chief Justice.

Did you catch that in the 4th post? Pocahontas insulting the Supreme court was the defining moment for her. It was from this story:

That’s right. The Dems lost. It’s all over but the crying.

We’re not quite out of the morass yet. Dems have a few ways to drag this process out, and will almost certainly want to extend this past the State of the Union address.

As for the talking point about it being ‘illegitimate’, Trump may have something to say about how many witnesses the Senators have heard from: Chief Justice Roberts GLARES At Pocahontas After Ridiculous Impeachment Question 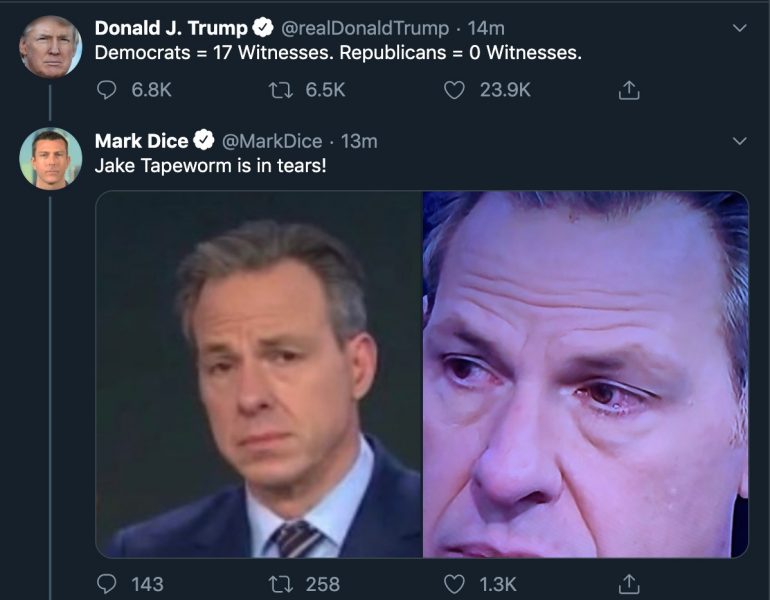 “Trump won.” ? @CNN begins its months of mourning. Wait’ll they get a load of Trump’s landslide re-election! ?pic.twitter.com/O4bkU17w2J

Scientists In The US, WHO, State Omicron No Worse Than Other Coronavirus Variants
December 8th, 2021 The Political Cowboy