Now that he’s been released from Gitmo, Omar Khadr, multi-millionaire, is living his best life.

Sure, he spent some time in at Gitmo, but sympathetic Canadian liberals have made sure he won’t suffer again.

Khadr, the former “child soldier” who was brought at age 15 to Afghanistan by his Al Qaeda-connected father, was held at Guantanamo Bay for eight years. In 2002, he was captured held at Bagram Air Base before being transferred to Gitmo a few months later. Khadr was at Guantanamo Bay from 2002 to 2010 where he plead guilty to killing U.S. Army Medic, Sgt. Christopher Speer. He later retracted.

In 2010, Khadr was repatriated to Canada and in 2013 initiated a $20M (Canadian) lawsuit against the Government of Canada alleging that they conspired with the U.S. government to abuse his rights. In 2017, the Trudeau government settled the lawsuit with Khadr quietly awarding him $10.5M Canadian. The awarding of multiple millions to a convicted terrorist sparked outrage in Canadian conservative circles because a Utah civil court had awarded Sgt. Speer’s family $134M (USD) for the killing of the medic. The Speer family is still trying to have the award enforced in Canada.

Meanwhile, Khadr used $3 million to invest in a strip mall in Edmonton, Alberta and has hidden away the remainder. In 2019, a Trudeau-appointed judge ruled that his war crimes sentence had expired, so all conditions have been removed including the ban on obtaining a passport.

After his release, Khadr appeared on the french-language version of the CBC, has conducted several interviews with his version of events and enjoys mild celebrity status in Canada. He also enrolled in university.

Now, he’s a keynote speaker at an event at a prestigious Canadian University in Nova Scotia.

Khadr is scheduled to speak at an event on children’s rights hosted by Dalhousie University on February 10, 2020.

The event is part of the university’s Open Dialogue series, in partnership with the Roméo Dallaire Child Soldiers Initiative. The talk will be hosted by the CBC’s Nahlah Ayed and will also feature former child soldier and author Ishmael Beah as a speaker. 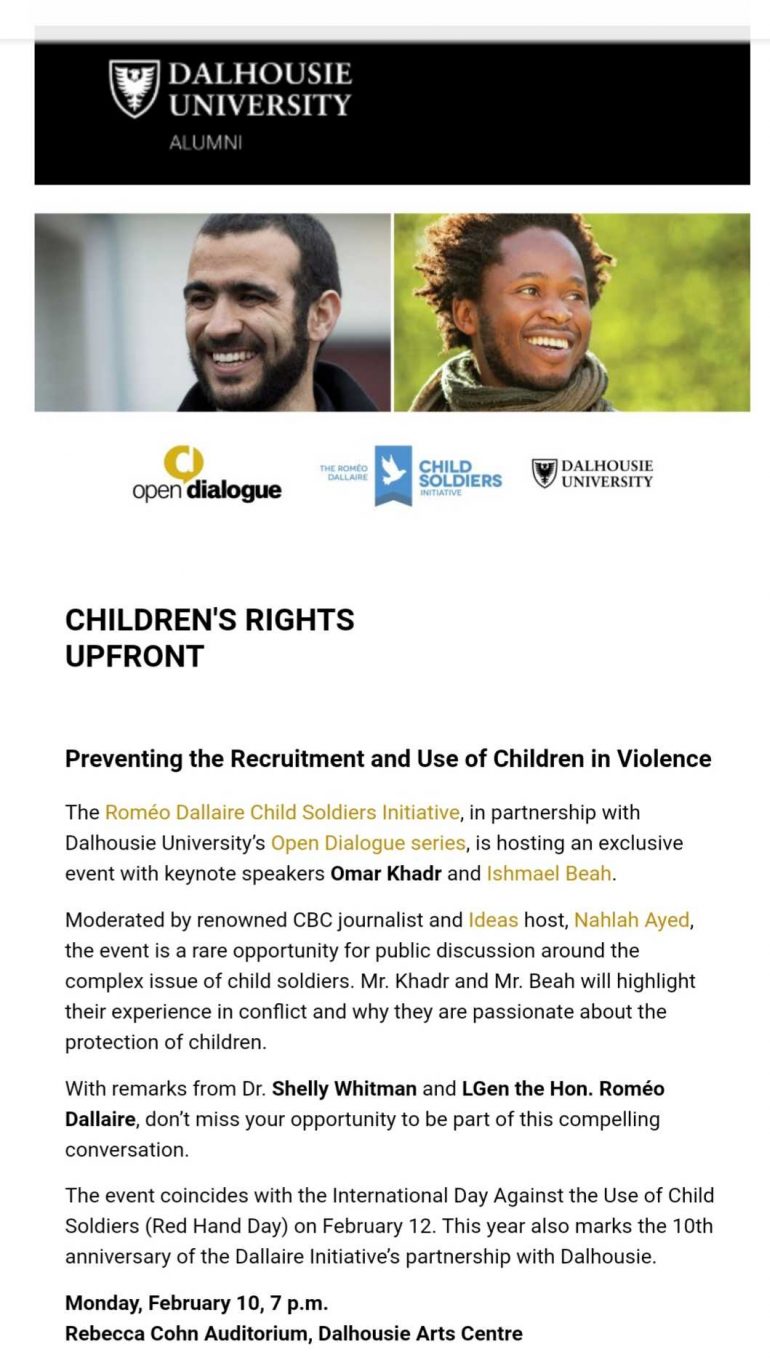 The question is, will Khadr be paid for this speaking appearance?

Khadr isn’t honoring the Utah ruling against him and has left the Speer family to fight to get what is owed to them.

For the past few years, Khadr has been seeking a way out of US war crimes charges he pleaded guilty to before being released on bail in Canada. A US civilian court has since turned down Khadr’s attempt to force a military court to hear an appeal on his conviction…

…A Utah civil court awarded Sgt. Speer’s grieving family a $134 million claim against Khadr for the slaying of the US soldier and the family is currently trying to have the award enforced in Canada.

“What is important are Mr. Khadr’s actions that day and leading up to that day. The plaintiffs and the Utah court hold Mr. Khadr responsible,” said the Speers’ lawyer, Jamie Schacter.

I don’t believe in “no platforming,” and Khadr is free to speak anywhere that wants him there. But it is shameful that he is given a platform at a prestigious university like Dalhousie as he continues to ignore a court ruling against him.