In a bold (and perhaps brilliant?) move Joe Biden’s campaign sent out a fundraising letter from one of his dogs, an adopted German Shepherd named Major.

“Major” begins the letter with barks, but then writes in English because “most of you don’t speak canine.”

The letter goes on to say that Major knows that his “dad” is very busy running for President and has spent very little time at home playing with him and his “brother” Champ. So, he’s trying to raise money to bring Joe home for a day to play with the canine kiddos.

Here is a full copy of the text:

I’m writing to you because my dad (Joe Biden — he’s running for president, you know) has a really big day coming up in three weeks.

Something about a Caucus — I don’t know what that is, but it sounds pretty important!

Dad spends a lot of time away from home working to win this Caucus, and I miss him a lot. But my brother Champ says if we can pitch in and help, maybe Dad will come home for a day and play with us!

I’m thinking about selling a few of my favorite toys, but Champ said I should reach out to you first.

If it wouldn’t be any trouble, could you pitch in to help my dad, Joe Biden, win the Caucus? Anything you can give would help out a bunch.

Thanks for supporting my dad! If you send him out on the road, tell him Major says “come home!” 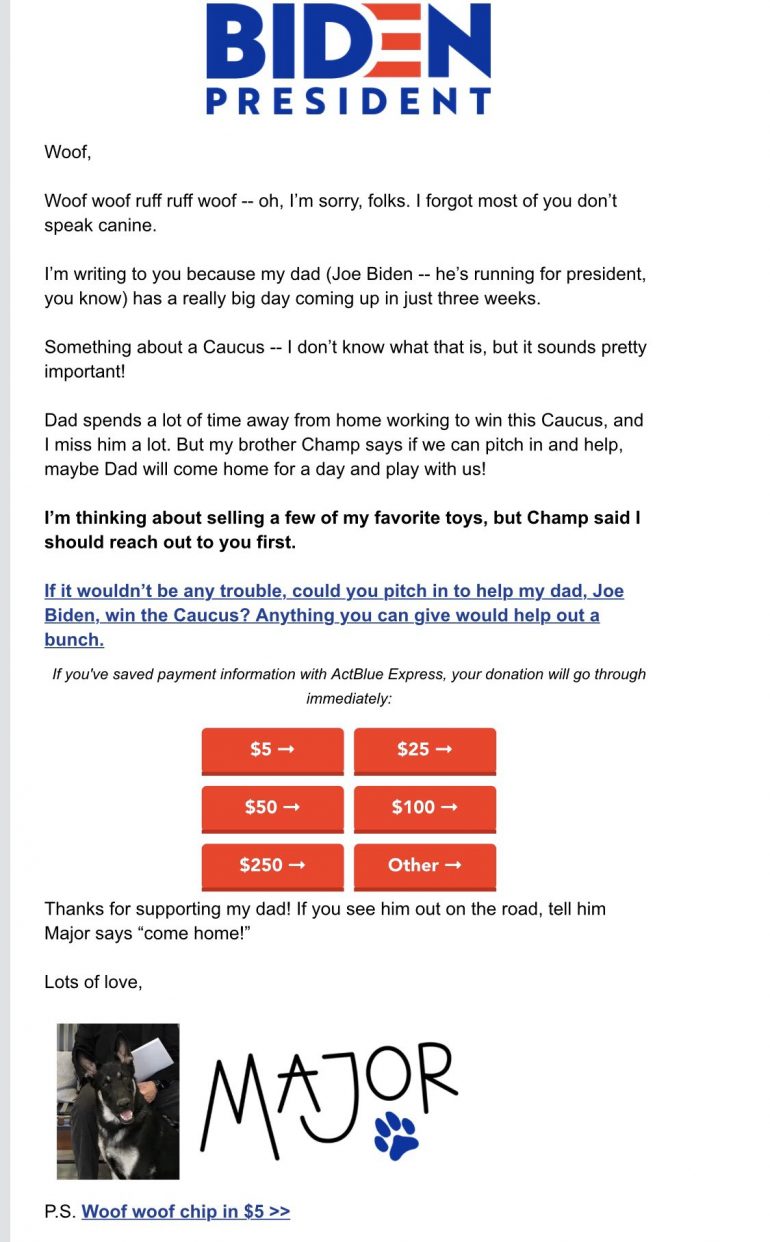 Is he channeling Hillary?

My teenage son said, “Is he claiming the dog as his son because Hunter is such a disappointment?” Out of the mouths of babes, right?

He said the n word in canine

Dementia is a cruel mistress.

Well he's got the sniffing strangers part down.

But there were a couple of fans of the move:

I think it's sort of brilliant tbh

Now, I know that there are a lot of dog-lovers out there, but, I’m not one of those due primarily to allergies of just about everything with fur and cleaning up something else’s poop. So, perhaps I just don’t get it.

Is this weird to dog-lovers?

Well, Clash Reader, what do YOU think?

What Do You Think Of A Campaign Letter Written By Biden's Dog?