There’s just nothing more noble than a multi-millionaire advocating for communism to help the common man.

Cynthia Nixon, the actress who is best known for her role as Miranda Hobbes in HBO’s Sex and the City, (and who failed to defeat Andrew Cuomo for the race to be Governor of New York in 2018,) is now a big fan of Bernie. On Monday Nixon appeared at a Bernie campaign event in New Hampshire.

She explains how in 2016 she was “dazzled” by the septuagenarian socialist but stuck with the “safe” choice to support — Hillary. She’s making a different choice in 2020, though.

Nixon said, “We have made do with crumbs for so long and Bernie has said, ‘Hey, we’re starving in this country. We can’t subsist on these crumbs anymore. Why can’t we demand the whole pie?'”

.@cynthianixon: "We have made do with crumbs for so long and Bernie has said, 'Hey, we're starving in this country. We can't subsist on these crumbs anymore. Why can't we demand the whole pie?'" pic.twitter.com/JqzpJsGxp5

It’s just so astounding how so many very, very rich people are demanding the redistribution of wealth so that the people who subsist on “crumbs” are getting their “fair share.”

Nixon’s reported net worth is approximately $25 million, but she’s not handing that over to all of those people who she claims are subsisting on “crumbs.” 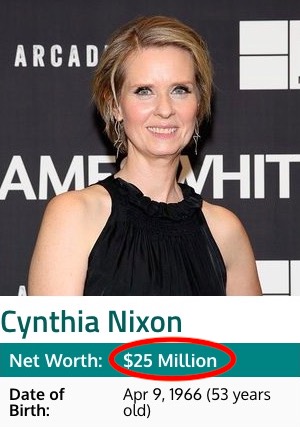 Well, it would seem appropriate that an out-of-touch celebrity forced to live on her meager $25 million of “crumbs” would advocate voting for the multi-millionaire “democratic socialist” whose own net worth is approximately $2.5 million.

What could be better than multi-millionaires asking for more?

It seems a tad bit out of touch, no?

Nixon is also very excited that Bernie has managed to shift the Democratic party further left and made socialism the mainstream.

At another event, while she is repeating the same speech, Nixon stops Bernie’s crowd from booing Hillary.

Actress Cynthia Nixon told a hockey rink filled with Bernie Sanders supporters to stop booing Hillary Clinton, after the ‘Sex and the City’ star told the crowd she had supported the former secretary of state for president in 2016.

Nixon shushed the crowd and explained why she had liked Clinton – she’d be the first woman president. ‘And I thought she was unbeatable,’ Nixon admitted. ‘And let me tell you, four years ago I listened to Bernie and I loved what he was saying,’ she added.

Nixon gushed about Bernie despite endorsing Hillary last time around.

In short, in politics, Sanders fit the bill, much like ‘my wife,’ Nixon said to big cheers.

‘That’s the thing about Bernie, we love him and we want to fight for him,’ Nixon argued.

And fight they will.

The Bernie Bros won’t be happy until we’re all in bread lines or gulags.