[Editor’s note: This is a developing Story, updates will be added as new information comes in.]

– As we predicted, below, Steyer has seen the writing on the wall and withdrew from the race.

-Bernie plus Pocahontas is 27% or 1-in-4. A bigger percentage than 1-in-5, but still low enough that it might help pump the brakes on their revolutionary instincts for fear of losing the moderate vote.

Ladies and Gentlemen, Sleepy Joe isn’t (quite) dead yet!

The argument (or mantra?) we kept hearing from the Biden campaign was always … ‘just wait until we get to South Carolina’. The demographics there, they would claim, have a far more favorable ethnic constituent mix.

The Black vote was always the one he could count on for an advantage over the other candidates.

Numbers, as always, are fluid, and nothing is set in stone until the final vote is counted — you can ask Al Gore all about that.

But all things being equal, the preliminary numbers favor the Sleepy Veep.

With this only pointing to 1% of the totals, there’s still PLENTY of room for the numbers to swing pretty wildly. Even so, the numbers we have to play with at this point are pretty interesting. 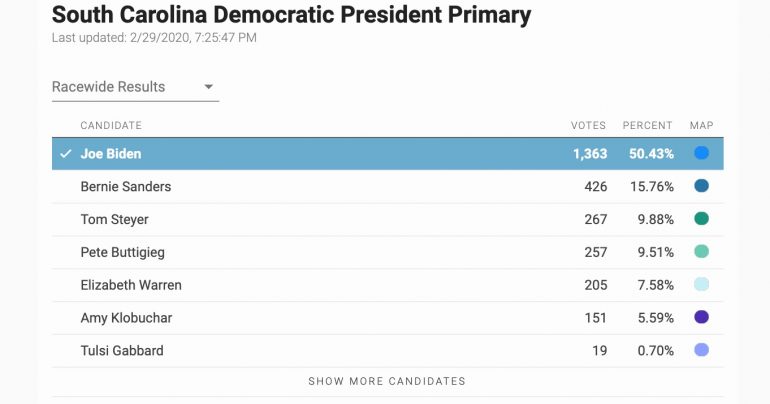 Joe Biden garnered more than three times the support shown to Bernie Sanders by black voters in South Carolina — 60% to 17% — after the former vice president racked up a 10-point margin from that electorate in Nevada.

Biden’s support among black voters trumped Sanders’ customary strength among younger and more liberal voters: Blacks younger than 45 and liberal blacks, including those who described themselves as very liberal blacks, all preferred Biden in South Carolina.

Notably, too, 42% of all voters in the state, and 52% of blacks, picked Biden as the candidate who “best understands the concerns of racial and ethnic minorities.” About 2 in 10 overall picked Sanders on this measure, while 1 in 10 picked Tom Steyer.

About 52% said the next president should return to Barack Obama’s policies, compared with approaches seemed more liberal (27%) or more conservative (17%). That was a boon for Biden, as 6 in 10 of those who preferred Obama-era policies backed him. Sanders won voters seeking more liberal policies, but by less of a margin. — ABC

It means a couple of things.

For Steyer:
Steyer went for broke with South Carolina, trying to be taken seriously in this Contest. Early counts suggest his money-bomb wasn’t enough to buy him anything better than 4th place. If that holds, don’t be surprised if he cashes out his chips sooner rather than later instead of throwing good money after bad.

As of SuperTuesday, there will be another Billionaire on the ballot taking that gambit of trading a personal fortune for party confidence. In terms of personal fortune, Steyer is entirely outclassed. If he doesn’t tap out, it’s because he’s a glutton for punishment, not because he has the ghost of a shot in any real sense.

For Bernie:
This won’t be the cakewalk to victory he might have hoped for. If this trend holds, we could have a real streetfight on our hands.

The others:
It’s getting to be ‘fish-or-cut-bait’ time. Do they cut their losses and drop out — throwing support behind someone in hopes of riding their coattails to a government appointment? Or do they stay in the fight?

For America:
If less than 20% supported Bernie and Warren combined, it could signal that their party rank-and-file hasn’t yet bought in to the Bernie/AOC revolutionary vision of transforming America. That’s a small sample size, but it might help the DNC pump the brakes on the push they’re getting from the ‘Democratic Socialists of America’ crowd.

For Republicans:
Get the popcorn ready. The internecine catfight will continue, most likely a bitter and prologed one.