This is very good news for a President seeking re-election.

Americans feel better about their personal financial situation than they did under Obama, Clinton, or even Reagan. This year-to-year number has been rising since 2018 and has hit a 44-year record high according to Gallup’s “Mood of the Nation” economic survey. Gallup reports that 59% of Americans — nearly six in 10 — say that they are better off financially than they were a year ago, which is up from 50% last year.

These data come from Gallup’s annual Mood of the Nation survey, conducted Jan. 2-15. The survey was completed after months of historically low levels of unemployment and as the Dow Jones Industrial Average neared the 30,000 mark for the first time.

The current 59% of Americans who say they are better off financially than they were a year ago is essentially tied for the all-time high of 58% in January 1999. That was recorded during the dot-com boom, with conditions similar to the current state of the economy — a stock market rocketing to then-record highs and unemployment at multidecade lows — though GDP growth was higher at that time.

There has also been a sharp decline in the percentage of people who say that they are financially worse off than a year ago. Only 20% of Americans are stating that as their financial reality, and that is a record low. 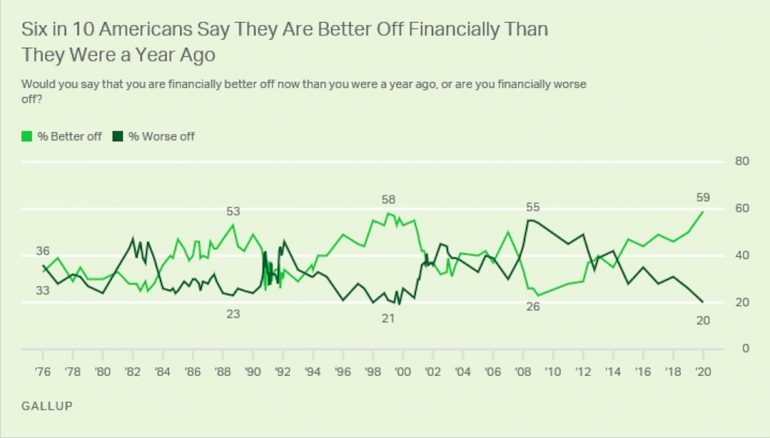 In addition, Americans are quite optimistic about their longer-term future financial outlook with 3 in 4 respondents (74%) predicting that they’ll be in an even better position next year. This is the highest response since Gallup started asking this question in 1977. The previous high at 71% was during the dot-com boom in 1998.

In addition to U.S. adults’ highly positive report on their current financial situation, Americans are also expressing peak optimism about their future personal financial situation. About three in four U.S. adults (74%) predict they will be better off financially a year from now, the highest in Gallup’s trend since 1977.

Americans’ levels of optimism about both their current financial situation and where it will be a year from now are at or near record highs. These views align with President Donald Trump’s contention that Americans are doing better under his presidency, and with his use of the economy and job growth as key selling points for his reelection. Republicans’ positive views on their finances are something of a given for a GOP president, at least during good economic times. The majority levels of optimism among political independents are more significant for Trump’s reelection prospects — and something Trump will want to maintain in 2020 to stay competitive.

This fantastic economic boom is how President Trump is going to win the 2020 election.

Which of the Democrats running for President can assure voters that their financial future is secure when they’re running on full-blown socialism with “free” healthcare, student loan forgiveness, and proposing to completely overhaul the economy under the Green New Deal?

This Gallup poll comes hot-on-the-heels of another poll they released showing that approval of President Trump’s job performance was at 49% — four points higher than Obama’s at the same point in his presidency.

Imagine if the presstitutes weren’t so partisan and were actually “fair and balanced” with their coverage of President Trump. His approval rating would likely be even higher.