It would seem that even Bernie isn’t far enough left on certain issues for some of his supporters.

Senator Bernie Sanders(D-VT) might be one of the top-tier candidates who is an avowed “democratic socialist” who has shown sympathetic sentiment to communist regimes, but as we’ve seen some of his supporters are incredibly extreme in their views.

That was clear in Carson City, Nevada on Sunday when a Bernie rally was stormed by animal rights activists. One woman tried to grab the mic from Bernie while others gathered with signs to gather on the stage. Two female protesters were topless and poured pink liquid on themselves from milk cartons. One woman shouted, “Bernie, let dairy die!”

Bernie had just introduced his wife Jane O’Meara Sanders as “The next First Lady” when his “biggest supporter” grabbed the mic and started ranting about the dairy industry. Her mic was cut off but her fellow activists then stormed the stage.

Watch as Bernie wasn’t having any of it.

But that moment was just the beginning…

Two topless kindred spirits hopped onstage to join her. They poured milk on themselves and preened around the podium for just a few moments before security took the protesters away.

The crowd shouted “Bernie!” while some members screamed obscenities at the women. 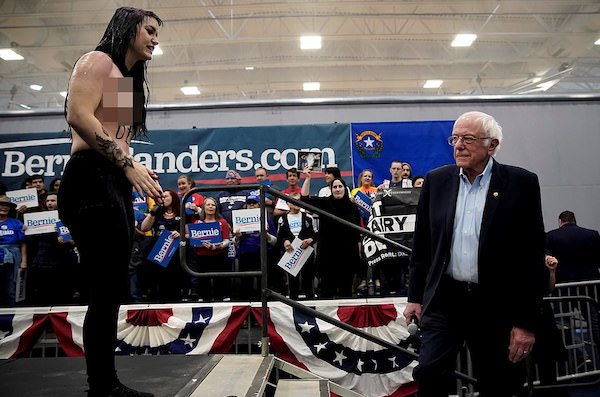 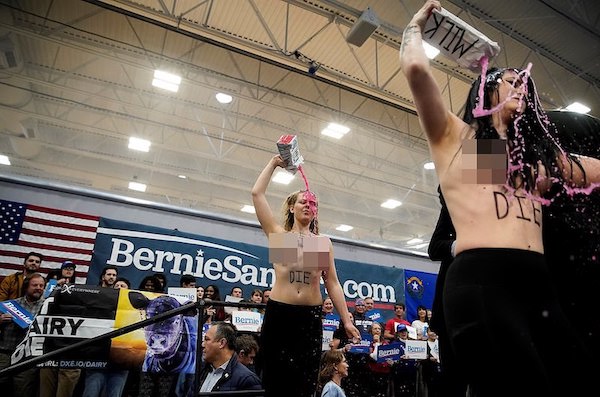 Several people at the rally had their phones out and caught the moment.

Just kidding. They look like nutters. But don’t say that to them — they might throw you in a gulag.