San Francisco has embraced a lot of changes. Few of them have been good for the average law-abiding person. Here is yet another example of that fact.

With staff present, two ‘customers’ walked into a pharmacy and started loading up a garbage bag with merchandise off the shelves so they could walk out with it.

And really, what was anyone going to do about it… call the cops? 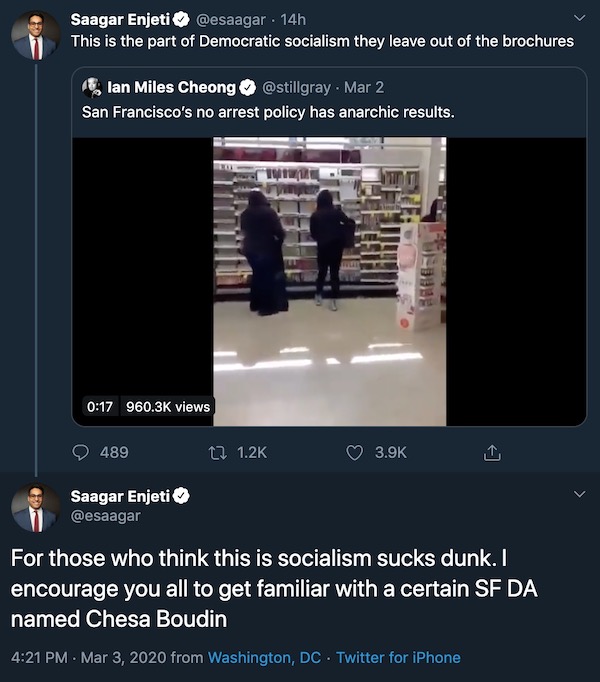 This is hardly the only policy ‘reform’ favoring law-breakers over law-abiding citizens.

The San Francisco Police Association, however, blasted Boudin for the new policy reform.

In a statement, SFPOA President Tony Montoya said, “In his short tenure, Chesa Boudin has demonstrated that he is a clear and present danger to the law abiding residents, businesses and visitors of San Francisco. Get pulled over and have an illegal handgun or AR-15? No problem, Boudin will throw out your case. Have 10 pounds of meth all in small plastic bags ready for sale? No problem, Boudin will throw your case out too. It’s unconscionable that Boudin would let someone with an illegal gun go free, only to allow them the opportunity to arm themselves again. Chesa Boudin is emboldening criminals and we are all going to pay a steep price for his absurd policies.” — SFGate

Progressives and neo-Marxists across the country blushed at the thought of San Francisco having an unabashed socialist as district attorney who pledged to radically reshape the city’s criminal justice practices.

Just two days on the job, Chesa Boudin is delivering on what he promised: the Bay Area’s new D.A. has fired seven prosecutors, many of them seasoned veterans who have worked to get violent criminals off the streets.

“I had to make difficult staffing decisions today in order to put in place a management team that will help me accomplish the work I committed to do for San Francisco,” Boudin said in a statement to KPIX-TV.

…NBC News noted in December that Boudin was called a “communist radical of sorts” by the San Francisco Deputy Sheriffs’ Association during his campaign. As TheBlaze has reported, Chesa Boudin ran as a progressive prosecutor and has a long sordid history of far-left activism and ties to Marxists, including having once worked for late Venezuelan ruler Hugo Chavez. —Blaze

Elections have consequences, we were told.

More importantly… IDEAS have consequences. When you put radicals in places of power, neighborhoods slide into lawlessness and begin to rip themselves apart.