Extreme “Green” activist groups are in conflict over a controversial tweet. Here’s the 411…

Extinction Rebellion, the extreme environmentalist movement that uses civil disobedience to push for radical environmental protections has a problem. A Twitter account that claims to represent a branch of the group in East Midlands posted photos of a poster praising the Wuhan virus for the Earth beginning to heal as economies around the world grind to a halt and the death toll rises.

It’s not a good look.

Some other branches of Extinction Rebellion, (abbreviated as XR,) said that the East Midlands account is “fake” and doesn’t accurately reflect the views of XR UK as a whole.

The posters were shared on Twitter by a group claiming to represent XR East Midlands, with the caption: ‘Earth is healing. The air and water is clearing. Corona is the cure. Humans are the disease!’

However, other branches of the protest group have distanced themselves from the sentiment.

Earth is healing. The air and water is clearing.

Corona is the cure.
Humans are the disease!#ClimateCrisis #CoronaCrisis #coronavirus pic.twitter.com/nYJp30WhtH

An XR UK spokeswoman said that the group has seen the “Extinction Rebellion” logo used on other types of “fascist propaganda” and believes that the Midlands group posted the fake message to reflect poorly on the group.

Suzanne Savage, who represents the Extinction Rebellion Midlands branch, also told ITV News Central she had “absolutely no idea” who was behind the “fake” account.

She said she and others had reported it to Twitter and had taken legal advice.

“The views expressed in the tweets by the fake account are contrary to Extinction Rebellion’s principles and values, and we entirely disassociate ourselves from anything posted there.”

Despite the statement by XR Midlands, XR East Midlands group insists that it’s a legitmate branch of the larger organization.

So it’s become a game of He Said/She Said.

Other Extinction Rebellion groups across the United Kingdom weighed in on the tweet. 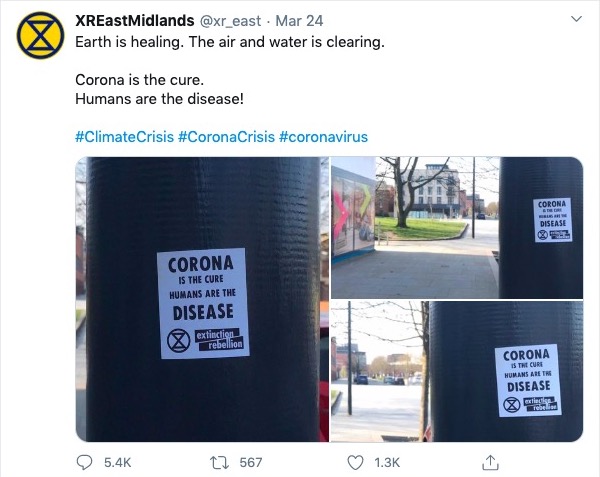 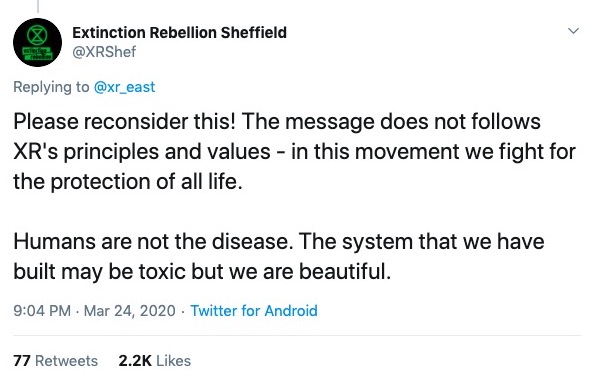 One Twitter account, @ExtinctionSymbol, condemned the use of the extinction symbol on the posters saying that “it’s not what it’s about.”

Others accused the XR East Midlands of promoting ecofascism. 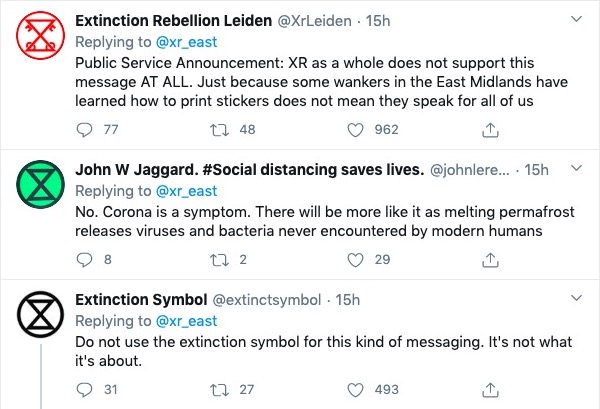 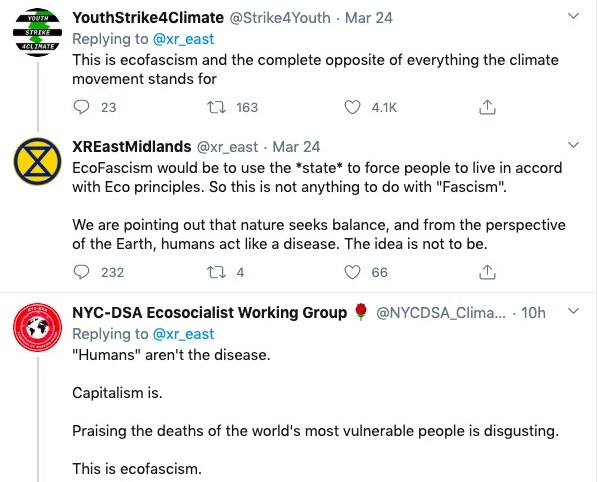 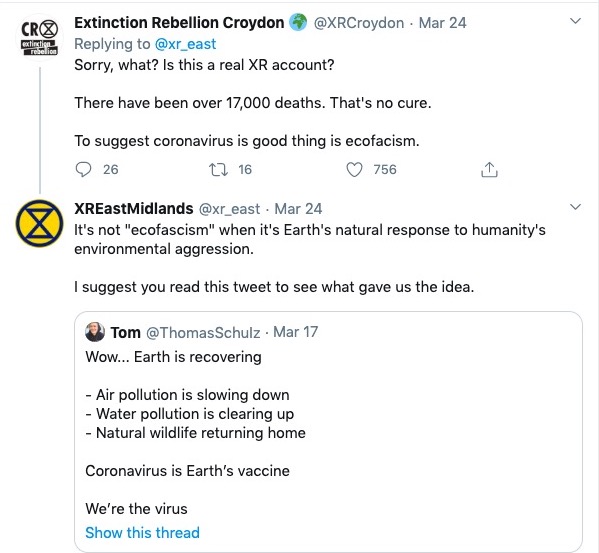 It’s always so much fun to watch them eat their own like this.

These are some of the same people that have decided to not have children because it’s better for the planet for them to not reproduce. (They’re probably not wrong, but it’s not for the reason that they think.) They literally believe that the Earth would be better off without people on it. It’s just that when the rubber meets the road and an actual pandemic hits, they realize how ghoulish this statement actually is.

Dear enviro-nutters — this is how you look all the time to normal people.