Imagine if the guilt-by-association the Media throws in Trump’s direction actually cut both ways?

Spencer briefly supported Trump in ’16 and the top news story for days surrounded calls for Trump to denounce White Supremacists. He had already done so for years and Spencer wound up throwing his support behind Ilhan Omar, and he became an invited guest on CNN to DENOUNCE Trump but strangely, nobody saw any inconsistencies with that.

I deeply regret voting for and promoting Donald Trump in 2016.

Trump is likely the most robustly pro-Israel President we’ve ever had. And he STILL gets denounced as ‘literally Hitler’, probably because his critics lack any creativity in their baseless mudslinging.

And despite it being roundly and regularly proven false, the Left STILL trots out the ‘very fine people’ hoax to ‘prove’ that Trump is a racist. If you listen to the full 90 seconds or so of the clip, you will specifically hear him exclude the racists and troublemakers from who he means by ‘very fine people’, but don’t let the facts get in your way or anything.

Two events this week stand out in stark contrast to that narrative.

One is the Nazi flag that was flown at a Bernie event. The other is the deportation of a man who served an evil regime, however old he might have been.

First is the Nazi flag. If this happened at a Trump event, we’d be hearing that this was proof positive that both Trump and anyone who supported him were bigots. 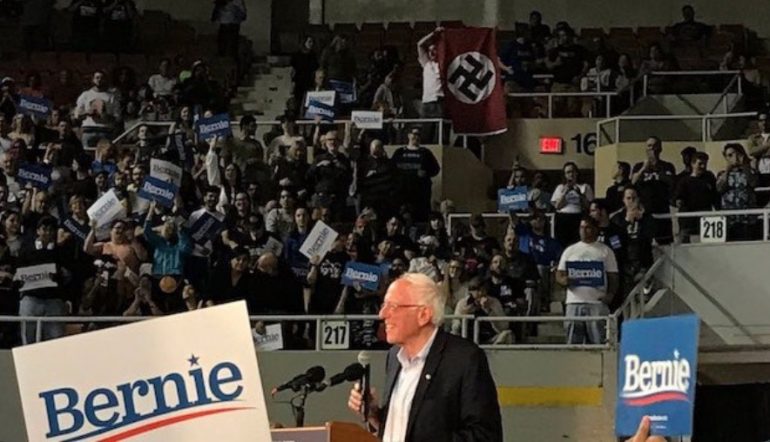 To his credit, Bernie denounced it.

Bernie Sanders responded to someone waving a Nazi flag at one of his rallies, calling the incident "beyond disgusting."

The man was booted from the event after the flag was clawed out of his hands.https://t.co/ekZRQwhIgL

But would that have been the end of it if this were a Trump rally? Likely not, Ilhan Omar is one of his surrogates and Richard Spencer speaks warmly of her. Why wouldn’t his policies attract other people who shared his view, despite Bernie being an ethnically Jewish candidate, of hostility to the nation of Israel?

Will there be demands that Bernie denounce bigots by name like the ones Trump faced?

Meanwhile, Trump’s administration is deporting the SECOND former Nazi guard back to Germany.

A 94-year-old German ex-Nazi who’s been living in America for over 60 years will be deported following a ruling by a Tennessee immigration judge, US officials said.

Friedrich Karl Berger, who was an armed guard at a concentration camp near Meppen, Germany, in 1945, was ordered on Feb. 28 to be removed from the States, government officials said. His exact deportation date — and a destination — are unclear.

The US Department of Justice’s Human Rights and Special Prosecutions unit began investigating Berger in 2017.

The Memphis immigration judge in Berger’s two-day trial found the prisoners being guarded by the ex-Nazi were subjected to barbaric conditions and forced into labor. — NYPost

The two events are obviously unconnected, but they do both serve as a backdrop of how the news we are served up by the drive-bys are selective in what they emphasize, and (especially!) in what narratives they build into the national conversation.

Have you heard about the deportation anywhere else? Probably not.

And the reporting you’ve heard on the flag — if someone showed up at a Trump rally and dared to hoist a Confederate flag, let alone the Nazi flag, can you imagine the outrage we’d hear from the same media? It would never end.

As mentioned, this was not the first time Trump’s team has deported a Nazi.

And who did the LAST president fight hard to deport back to Germany? This family of five who sought (and was granted by the courts) asylum due to religious persecution.

You’ll have to excuse us if we don’t take the overcharged ‘literally Hitler’ rants very seriously. It’s just that the people making those claims look like clowns to us.