Some hacks never miss a chance to pile on and show their true colors.

Bill Kristol is one such person. He pretends to be a dissenting Conservative, while somehow lining up pretty much point-by-point against every single thing Trump has ever done.

He has a lot to say about the moral perfidity of any conservative who has the ‘audacity’ of backing POTUS 45, too.

Yeah. He’s one of THOSE insufferable bastards.

And now that Rand Paul has been diagnosed with Wuhan Coronavirus, he went looking for a way to make that somehow reflect badly on Republicans.

The one he went with was: see how ‘privileged’ Republicans are getting preferential treatment over the public? 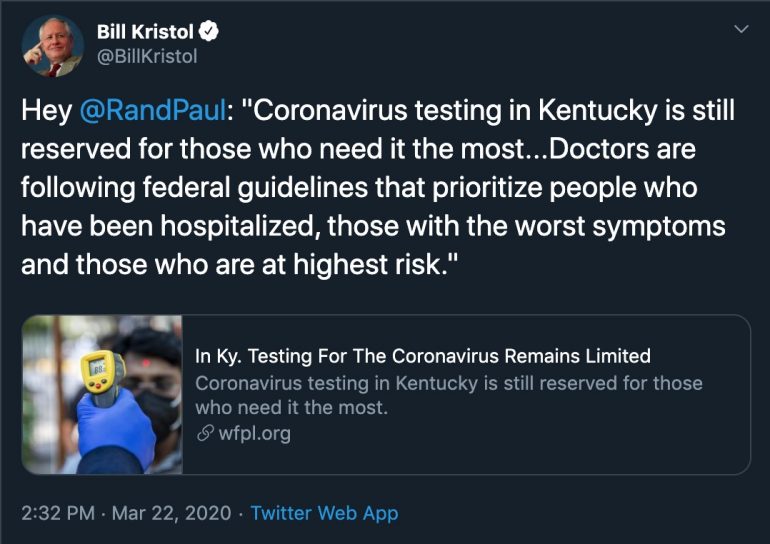 You don’t have to think very long or hard to come up with a reason why Paul would be considered at significantly greater risk with respect to this PARTICULAR illness, do you?

Maybe it’s tough for someone using up all their mental bandwidth in anti-Trump angst. But for the rest of us who have even a PASSING acquaintance with the news, it’s pretty obvious.

That attack on Rand Paul by his neighbor had complications. He had part of his lung removed. Or had Bill forgotten that in his zeal to ‘own’ Trump? 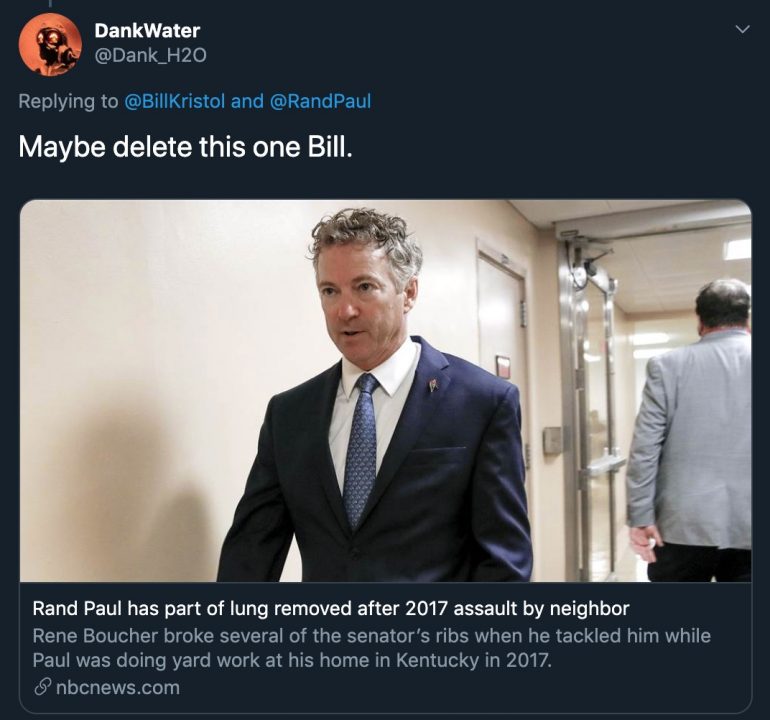 By the way, what can we say about Bill’s new employer, ‘the Bulwark’?

The supposedly right-of-center website has an interesting benefactor, as a Breitbart article written shortly after its 2019 launch reminds us…

With most of his money coming from far-left billionaire Pierre Omidyar, Never Trump dead ender Bill Kristol decided to put the “bull” in Bulwark by launching his new website with a heaping helping of fake news.

With a ton of aid and comfort from the gangsters at CNN and the serial liars at the Washington Post, the Bulwark officially launched this week with the promise to “conserve conservatism” by fighting the Bad Orange Man using the same guys who tanked the 23-year-old Weekly Standard last December.

…Obviously the Bulwark is not interested in facts. The site’s only goal is to ape and pay tribute to their benefactors in the anti-Trump media who — surprise-surprise — spread the same debunked lie.

So you don’t have to, I’ve been keeping an eye on the Bulwark and have come to three conclusions: 1) Every sentence sounds like it should end with a “sniff.” 2) The only way Trump could win any positive coverage from this clown-filled car were is if he agreed to launch a disastrous war in another country with no exit plan, and 3) snobbery is tiresome, tedious, and dull.

Gee, what an enormous surprise.

Politics make strange bedfellows and all that.