So, the country that unleashed this damned virus on the planet because they include creepy animals on the menu is now looking to BEARS for a ‘cure’… seriously?

The Chinese Wuhan Coronavirus has circled the globe, and while it is (allegedly) under control in China itself now (but who knows for sure, what with Western journalists having been chased out of the country) they are offering their own wisdom to the world.

Until recently, China officially concurred with the published study suggesting the anti-malarial drugs might be effective.

BEIJING, Feb. 17 (Xinhua) — Chinese experts, based on the result of clinical trials, have confirmed that Chloroquine Phosphate, an antimalarial drug, has a certain curative effect on the novel coronavirus disease (COVID-19), a Chinese official said here Monday.

The experts have “unanimously” suggested the drug be included in the next version of the treatment guidelines and applied in wider clinical trials as soon as possible, Sun Yanrong, deputy head of the China National Center for Biotechnology Development under the Ministry of Science and Technology (MOST), said at a press conference. — Xinhuanet

They have since changed their tune on that med… possibly because it is mostly produced in India, and they have produced a rival pharmaceutical in China they are relying on.

But another ‘cure’ they are endorsing is one that should be enough to make Lefties start to care about China’s unabashed cruelty to animals and other living things (like people).

Less than a month after taking steps to permanently ban the trade and consumption of live wild animals for food, the Chinese government has recommended using Tan Re Qing, an injection containing bear bile, to treat severe and critical COVID-19 cases. It is one of a number of recommended coronavirus treatments—both traditional and Western—on a list published March 4 by China’s National Health Commission, the government body responsible for national health policy. This recommendation highlights what wildlife advocates say is a contradictory approach to wildlife: shutting down the live trade in animals for food on the one hand and promoting the trade in animal parts on the other.

Secreted by the liver and stored in the gallbladder, bile from various species of bears, including Asiatic black bears and brown bears, has been used in traditional Chinese medicine since at least the eighth century. It contains high levels of ursodeoxycholic acid, also known as ursodiol, which is clinically proven to help dissolve gallstones and treat liver disease. Ursodeoxycholic acid has been available as a synthetic drug worldwide for decades.

As you might guess, this approach stems from Traditional Chinese medicine and is historically used in the, uh, ‘treatment’ of respiratory ailments like bronchitis.

Where do they ‘harvest’ bear bile? Not from wild animals, that’s illegal. (Officially, anyway)

National Geographic published this photo of a sedated bear being ‘harvested’ for bile: 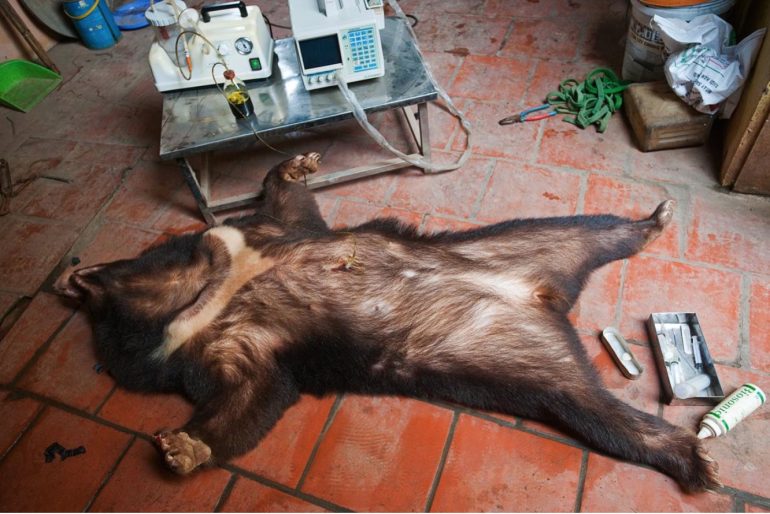 At bear bile farms in China and across Southeast Asia, the animals may be kept for decades in small cages. Bile is routinely extracted by inserting a catheter, syringe, or pipe into the gallbladder. All methods for extracting bile are invasive and “cause severe suffering, pain, and infection,” according to Animals Asia, a nonprofit dedicated to ending bear bile farming. Neglect and disease are common on these farms, and consumers risk ingesting bile from sick bears, which may be contaminated with blood, feces, pus, urine, and bacteria, according to Animals Asia.