Not one Democrat was present in the chamber to hear Ted say this. Where the Hell was everyone else?

In this clip, Ted Cruz blasted the Democrats for obstructing needed aid while the crisis continues to deepen, here and around the world.

He makes the stakes really simple to understand, by underscoring the cost of delay. One person in Texas died since the Democrats began to obstruct this.

He gives a breakdown of how many new cases and deaths nationally and around the world — SINCE they voted to obstruct this (originally) bilateral motion.

Our nation does not have time for Dems’ petty partisan games. pic.twitter.com/8RWLfErK5H

In another clip, Cruz makes clear exactly what game he thinks they’re playing.

Sen. @tedcruz UNLOADS on Dems from the Senate floor:

"What the hell do the emissions standards on airplanes have to do with thousands of people dying and millions of people out of work in the Coronavirus epidemic?" pic.twitter.com/zXiQjJRpRA

And calls them out for some of the ridiculous inclusions they have been pushing for in the bill.

“The Democrats are pushing Wind and Solar Tax Credits. Mr. President, what in the hell does a windmill have to do with this crisis, other than there are some Democrat lobbyists getting fat and rich and they’re willing to extort a crisis to advance their political agenda?”

And for anyone claiming this is a Republican partisan talking point, don’t take our word for it… here’s Chuck Schumer in his own words:

Even the leftmost Republican senator had enough of Chuck’s games. 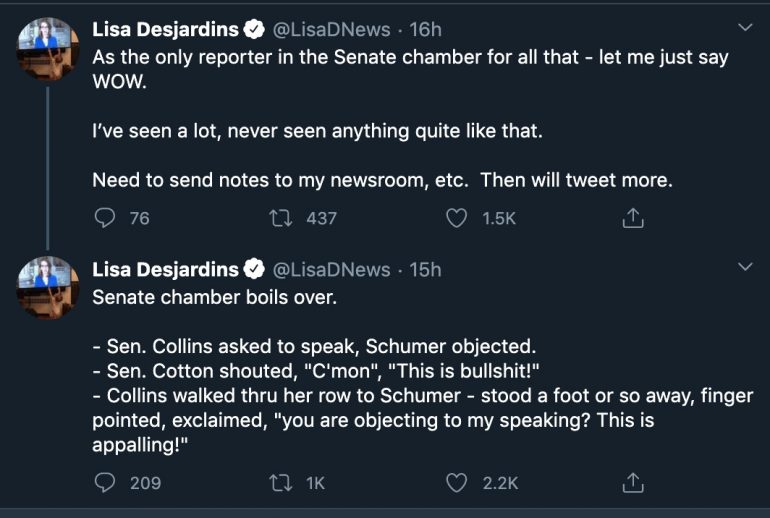