So, you think you know all there is to know about the prophet Jonah, do you? Maybe not.

The Book of Jonah is a favorite among children because it’s such a larger-than-life story with some tremendous imagery in it… imagery so powerful and improbable that many people just blow it off as ‘myth’ rather than history.

Let’s quickly sum up the story before we get to what the Bible leaves out.

It’s the story about a Jewish prophet running from the call of God when he’s been sent to a pagan city, and hops on a ship going the other way, only to find himself in a storm that threatens to tear the ship apart. He’s thrown overboard, and the storm immediately ceases! where he is gulped down by a ‘great fish’ that swims him back in the direction of where he was sent in the first place.

He makes his way to the pagan capital city, proclaims the message of divine judgment, but instead of blowing off the prophet’s message and seeing a fate of destruction, they repent in sackcloth and ashes, entreating the forgiveness of God. Then comes the chapter about Jonah sulking that God showed mercy to people who so obviously didn’t deserve it, in which a plant miraculously grows in a day to provide shade for Jonah, and then is destroyed in a day by a worm.

There are two questions left out of this story whose answers would have been obvious to the Jewish readers of the day but are not to those of us following along 2800 years or so after the fact.

1) Why did he have such a chip on his shoulder against Ninevah?

The answer to the first question is pretty straightforward.

Ninevah was the capital city of an aggressive Pagan empire that subjugated its neighbors. But the Assyrians were more than that, they took particular pride in their cruelty.

The barbarous treatment of their conquered enemies even made it into their artwork. 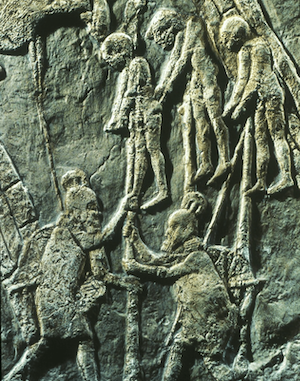 They were a real existential threat looming over Israel’s shoulder at the time of Jonah’s calling. How real of a threat? Real enough that it was this same empire that carried divided Israel’s Northern Kingdom into captivity roughly a generation or two later.

For us to imagine Jonah’s reaction to offering a message of repentance, hope, and peace to a hostile empire that posed a direct threat to Israel, the closest we can imagine is a Jewish prophet being sent with a message of hope and repentance to Berlin in about 1943.

How excited do you suppose an observant Jew would feel about bringing such a message of hope to the Third Reich? It’d be a hard sell, right? Of course! And so it was for Jonah.

Even worse, the ‘unthinkable’ happened. His message of repentance was welcomed by the city he so hated and feared. They cried out to God for forgiveness.

Jonah made a camp on the hill overlooking the city, waiting and hoping for fire to fall from heaven and destroy the place. But that fire never came. Instead, the prophet got an unlooked-for lesson in love, humility, and caring about your fellow-man, even when your fellow-man looks very different from you.

The Jews of his day, naturally, would have known what became of their own prophet, so they didn’t need to be told. But the rest of us are left in the dark.

Sadly, some have written and delivered entire sermons based on the silence that follows, either praising or condemning Jonah without giving any reason why.

But history has left us a significant clue about what happened next. A clue that made international headlines because of… the reckless behavior of ISIS.

As reported in the Left-leaning site ‘The Atlantic’:

As we saw the first images of Jonah’s Tomb destroyed in Mosul on July 24, 2014, we felt shocked and deeply uneasy. We had been following news from Iraq obsessively over the previous weeks, distressed by the Islamic State’s actions in a country we still thought of as home, even though all three of us now live in North America. Every bit of ISIS destruction had been terrible to witness, but somehow the image of this ruined tomb was uniquely jarring. Three years later, with Mosul liberated, we understand why.

The tomb, one of Iraq’s iconic monuments, was revered by Muslims, Christians, and Jews alike. It was believed to be the final resting place of the biblical prophet Jonah, who got swallowed by a whale and who warned inhabitants of the Assyrian city of Nineveh (now Mosul) that God would destroy them if they did not repent for their sins. Jonah’s story appears in the Bible as well as the Koran. His tomb is perched on a high mound containing many layers of history: an ancient Assyrian temple and palace, a site of devotion for Jews, a Christian church, and a 12th century mosque. In 1924, a grand minaret was added by a Turkish architect who described the glow of the site as God’s gift to Mosul. Renovated in the 1990s under Saddam Hussein, it was a popular draw for pilgrims.

But the tomb was much more than a tourist destination; it was a constant, potent symbol. Overlooking the city, it reminded all Maslawis of the interconnectedness of Iraq’s diverse religious populations. It was the antithesis of sectarianism. As such, ISIS’s decision to blow it up read as an attempt to erase the shared history of the many religious populations that Mosul housed, and to erase the very notion that such populations can share anything at all. But now that Mosul has been liberated from ISIS, we—three Iraqis from different religious backgrounds—hope all our communities will have a hand in rebuilding the city and its holy sites.

This tells us that Jonah was a real person with a real tomb.

More than that, his tomb was not in some out-of-the-way corner of the city, but he was buried on the site of the ancient Assyrian palace.

This shows us two things.

1) Jonah didn’t ‘get out of Dodge’ at his first opportunity, but he stuck it out in this pagan foreign city and took his place as a religious leader to a gentile people. He was, essentially, a Missionary. He never did return to Israel to be buried with his forefathers in his native soil as would have been so important to someone of his religion and culture.

2) Jonah was buried in a place of prominence. A foreigner came from far away. For reasons the Bible hints at but does not make clear, he was not just accepted as a prophet, but was given the high honor of being buried on the palace grounds.

This isn’t an arrangement some dead man could give himself, but one that shows his place in the eyes of his adopted community.

Centuries, and even millenia later, (2800 years, give or take) his tomb was STILL a site revered by the devotees of not one, but three religions.

This story — however much it may be scoffed at by skeptics — is very much anchored in history.