Jennifer Rubin is a walking, talking warning of the dangers of Trump Derangement Syndrome.

Rubin, like many in the Media(D), despises the President and is desperate for him to fail. They don’t want him to win in November, so they’re actually rooting against him. Some are even spouting Chinese propaganda about the number of cases and death rate from the novel coronavirus because… Orange Man Bad.

In one tweet, Jennifer Rubin, alleged conservative, exposed herself for the TDS sufferer that she is.

This is a bit convoluted but stay with me here.

Greg Miller from the Washington Post tweeted a story that said that Dr. Birx predicts “200,000 deaths if we do things almost perfectly.”

James Jay Carafano from the Heritage Foundation refuted that and said that the models showed between 60,000 and 160,000 deaths, but that both Dr. Birx and Dr. Fauci were cautious of models because things can change so quickly. He asked that Miller be more accurate. Not a bad thing to ask a reporter to do.

Maggie Haberman, New York Times hack that was revealed in the WikiLeaks email dump to be a “friendly” to Hillary, responded to Carafano with what amounts to, “Ackshully, it’s like, literally what she said! Don’t dunk on the reporter!”

To which, Jennifer Rubin, the absolute hack, responded, “If you quote the Trump admin you are an enemy of the people.” 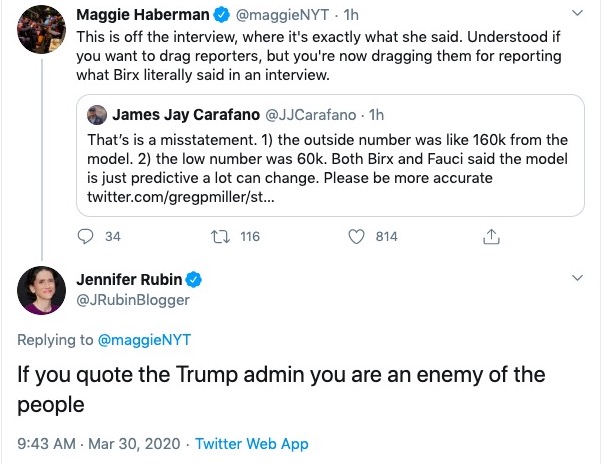 The thing is, if you watch the clip, you’ll see that Dr. Birx says that models are projections and that “we really haven’t done all of these things” like social distancing, promoting frequent hand-washing, etc. and says of the possible 100,000 to 200,000 death toll, “we don’t even want to see that” implying that the number isn’t as extreme as the 200K. The problem is, there are some people who did not practice social distancing early, especially in large cities.

Rubin’s smug tweet implies that a reporter who was “just doing his job” and quoting Dr. Birx is an enemy of the people. The problem is that he didn’t provide the proper context in his tweet and made it sound as though Dr. Birx said that 200,000 people would die from the novel coronavirus.

It’s weird that Jennifer used the phrase at all. It seems to really get under her skin because she tweeted about it a bunch of times. Here’s a small sample:

In an era when the media has been labeled the enemy of the people — and Republican officeholders agree — there certainly is no need to yuk it up with those contemptuous of the First Amendment. https://t.co/NR6cDdDud8

It turns out that what is really uncivil — and dangerous — is calling the press the enemy of the people. 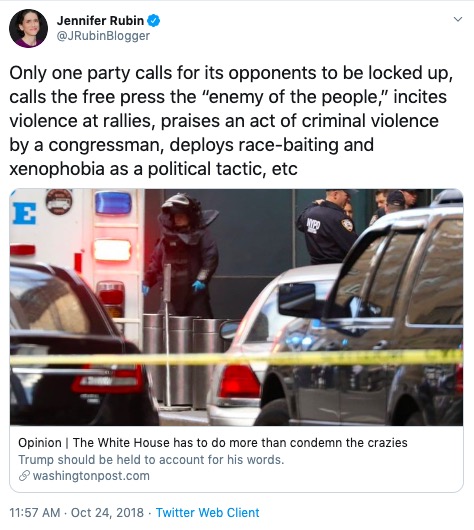 With reporters sitting right there, she echoed and defended President Trump’s accusation that the press is “the enemy of the people.” https://t.co/uczeSnne9c 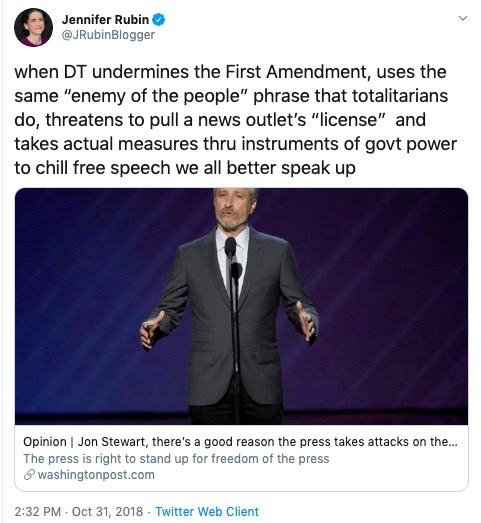 In continuing to deploy the Stalinist phrase “enemy of the people” — even after bombs were sent to CNN — and stoke fears of immigrants, the GOP sounds more like the far-right politicians in Poland, Hungary and now Brazil. https://t.co/hcNcAbZfZD

It’s also pretty rich coming from someone who spouts Chinese propaganda that calling it the “Chinese virus” is racist.

Instead of trying to concoct a racial boogyman (“Chinese virus”), he spoke about social solidarity https://t.co/UCsVMbiOAO

And she’s blaming Trump for reacting slowly despite the administration being slammed as “xenophobic” for instituting travel restrictions from China in January.

Even if we now institute uniform, serious measures to mitigate the spread of the virus, “260,000 people in the United Kingdom and 1.1 million in the United States” will die https://t.co/khIAhW1PFw

Despite all the criticism that Trump is a “dictator” and “Hitleresque” Rubin has criticized him for not being more authoritarian. In this article she shared, the New York Times condemns the Trump administration for failing to deal with a ventilator shortage by forcing companies to produce them. (By the way, the states that knew about the ventilator shortage after H1N1 and failed to act are not condemned in the article, just the Trump administration.)

Jennifer Rubin has gone all-in with her anti-Trumpism and is actively rooting for Joe Biden. Yet, I’m sure she still sees herself as a “conservative blogger.”

Ironically, she is precisely the problem with the Media(D)–they don’t even see that the people that they choose to give the “conservative” perspective aren’t conservatives at all. That is a problem with the partisan press–they don’t have anyone that accurately represents the other side. It’s not something that they’re willing to correct, and Jennifer Rubin is unlikely to acknowledge that she is, at heart, a liberal hack.