There are a handful of the “Believe All Women” crowd that haven’t abandoned their standard now that the accused has a “D” behind his name.

Tara Reade has accused former Vice President Joe Biden of sexual assault when he was a Senator in 1993. Reade’s story has changed over time, has some holes, and, as a Bernie supporter, she clearly has some motive to vilify the Democratic front-runner. That said, there was the one thing that gave her story a hint of credibility–immediately after the incident, she spoke to several people about it, including her mother. Reade’s mother has since died, but an unearthed phone call that she made to Larry King Live in 1993 seems to corroborate Reade’s story.

Some people are finding that evidence to be the smoking gun, especially since CNN hadn’t bothered to dig up the footage from their own archives and hadn’t reported on it until shamed into doing so when rightwing media had covered the video that was posted on Twitter. And now it appears that Google Play has memory-holed the video in question.

This is raising some red flags, and some pretty big-name celebrities are noticing.

Prominent Bernie Bro, John Cusack wants Reade’s story covered in the media and has been saying so since April 1.

Face it @krystalball: This moment right now, when ”feminists“ employed the same tactics against Tara Reade that the right employed against Dr. Ford, will forever give opponents of #metoo cause to dismiss the whole movement as politically motivated. https://t.co/MwxrdjNvDh”

Why aren’t dems demanding fair & safe elections – on principals merits.
Why do the bought media not cover the Tara reade allegation on principals – merits ?
Situational ethics –
More transactional self serving bullshit and hypocrisy –

Rose McGowan, the woman that was first to name Harvey Weinstein as the man that raped her years ago, has been very vocal in her support of Tara Reade. She’s even clashed with former Charmed co-star and #MeToo cheerleader, Alyssa Milano on her newfound discovery of due process.

You are a fraud. This is about holding the media accountable. You go after Trump & Kavanaugh saying Believe Victims, you are a lie. You have always been a lie. The corrupt DNC is in on the smear job of Tara Reade, so are you. SHAME https://t.co/B7NHK4k09K

You are a fraud. This is about holding the media accountable. You go after Trump & Kavanaugh saying Believe Victims, you are a lie. You have always been a lie. The corrupt DNC is in on the smear job of Tara Reade, so are you. SHAME https://t.co/B7NHK4k09K

As a survivor, the way you launched into this woman’s assault is truly vile. I feel violated by your shitty writing @bethreinhard. @washingtonpost your motto is ‘Democracy Dies in Darkness’ well I guess it’s dead because you are dark. Evil lives and it loves the DNC pic.twitter.com/LnZ9NdLQEj

The media loves an upper class blonde like the honorable Christine Blasey Ford. Make no mistake the slander of the brave Tara Reade is because she’s not a Liberal feminist’s idea of what Joe Biden would want to touch. #theNation pic.twitter.com/NSKleg1Jol

@NPR why do you not want to run the interview with Tara Reade’s friend who corroborates her story? The public should know that you are planning to run a story and refusing to talk to her friend. Why is this?

And finally, another Bernie supporter, Susan Sarandon tweeted out the article from The Intercept that cited the 1993 Larry King Live phone call by Reade’s mother.

Gratitude to @rosemcgowan @SarahAnnMasse@SusanSarandon@johncusack for their public support.
And to others and survivors
Thank you @kthalps@ryangrim@NathanJRobinson@RichMcHugh@mj_lee
Who are doing hard research work and looking at my story earnestlyhttps://t.co/kyVvpagn2f

Rose McGowan is finding out that sometimes Fox News isn’t the monster that the rest of the Media(D) portrays it to be.

And in our new alternate reality @foxnews is bringing truth https://t.co/fa6cO2n0ly

How weird is it that Bernie supporters are looking to right-leaning media sources for the coverage that is lacking in the mainstream Media(D)?

There just might be something to that whole “Partisan Press” stuff that conservatives have been saying for years, eh?

Let’s not forget that Joe Biden himself was one of the “Believe all women” crowd all the way back in October 2018. 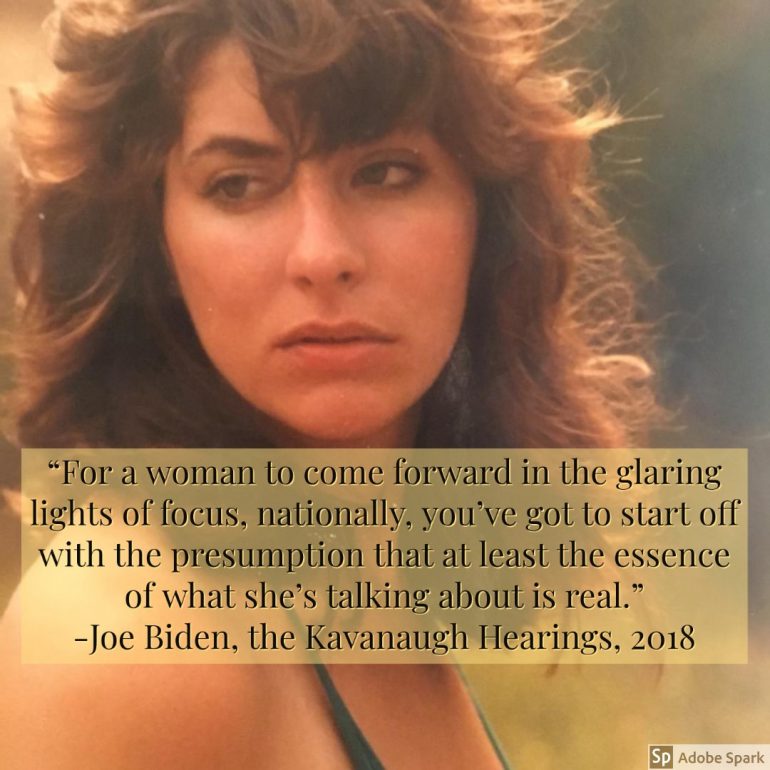 Gee, I wonder what changed?