The Left is busy trying to set up a lose-lose scenario for Trump’s Coronavirus response. Here’s just one example among many.

Trump either overreacted (‘xenophobic’ and ‘racist’) when he closed the border to China, or he has under-reacted (see Pelosi’s ‘blood on his hands’) and ‘failed to show leadership’ in this crisis.

We notice that the people lodging these complaints are usually the same ones who called Trump ‘literally Hitler’ and ‘authoritarian’ despite getting livid with him for ‘failing’ to blow past the limitations of his Article II powers and trampling over the responsibilities and authority of some 50 Governors.

As we said, ‘lose-lose’ scenarios.

Now we are seeing another one being set up with the COVID-19 bodycount numbers.

If the final numbers come in high, we all know what ‘failed leadership’ narrative the Liberals will be spinning come November. And we all watched together as the alleged experts came to us with projections of jaw-dropping lethality.

The fact that the public found these numbers both convincing and plausible can be seen in the visceral denunciations of anyone who fails to comply with the social distancing demands of experts, including the closing down of places like churches and parks.

So, if those numbers are kept low, that’s a good thing, right? That’s what winning looks like, isn’t it?

Normally, you would think so. But they are committed to keep the man who promised ‘so much winning’ from tallying up any wins.

Now they have come up with a way that even a ‘win’ can look like a loss. Notice how Chris Hayes isn’t PERSONALLY endorsing this idea. It’s just something that ‘people are saying’.

The most cynical interpretation of all this, one I can't quite bring myself to accept, is they rolled out the model showing 100k deaths after they knew it would be less than that so they could anchor everyone to that # and take a vicotry lap when "only" tens of thousands died. https://t.co/hYiUCHhO5g

Social media made short work of his statement.

Even the LEFT was piling on:

Chuck Ross came by to dunk on him. Chuck. Freaking. Ross.

Joe, here, sees right through him… 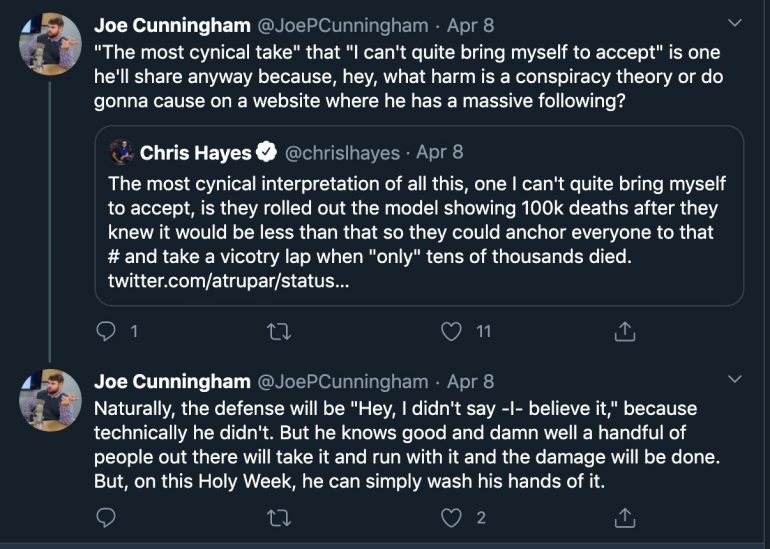 What’s the big takeaway? This sums it up well…

This is — and has always been — an elaborate series of ‘do you still beat your wife’ questions. From the day of his inauguration, and even before that.