The knee-jerk reaction that journalists have to counter everything that the President says because “Orange Man Bad” is shameful.

It would appear that there are some news organizations out there that are determined to oppose President Trump no matter what. This means that they will do anything to prove that he is wrong–even going so far as to spread Chinese propaganda. Increasingly, it is difficult to separate Chinese propaganda from the reporting of our elite betters in the Media(D).

One of the absolute worst examples of Trump Derangement Syndrome in reportage has been the insistence that the President was spreading “false hope” by mentioning the possibility that some drugs–specifically chloroquine and hydroxychloroquine–showed some promise in treating COVID-19 patients.

Trump was citing information that had been provided by experts, including some seemingly successful treatment of COVID-19 in other countries using chloroquine and hydroxychloroquine. A paper published in the medical journal The Lancet two years ago noted that the antimalarial drug had been successful in treating viral diseases like HIV and SARS. This information was published again in early February of this year as people around the world began to realize the seriousness of the spread of COVID-19.

In a paper published 2 years ago in this journal, some of us described the potentially therapeutic benefits of the quinoline antimalarial chloroquine in viral diseases such as HIV-1/AIDS and severe acute respiratory syndrome (SARS). Chloroquine/hydroxychloroquine has since been adopted to treat HIV-1-infected patients in clinical trials, and new insights into its antiviral activity have been obtained from in-vitro studies…

…The broad spectrum antiviral effects of chloroquine deserve particular attention in a time in which the world is threatened by the possibility of a new influenza pandemic, and the availability of effective drugs would be fundamental during evaluation of an effective vaccine.

Some in the Media(D) even cited the horrible story of a couple that consumed fish tank cleaner even though they didn’t have COVID-19 as a preventative measure and tried to blame that on President Trump.

On Wednesday, The New York Times finally admits that the drug (not fish tank cleaner) has been successful, but they did put in a lot of asterisks, which is fair when reporting on the effectiveness of a drug in a small trial.

The malaria drug hydroxychloroquine helped to speed the recovery of a small number of patients who were mildly ill from the coronavirus, doctors in China reported this week.

Cough, fever and pneumonia went away faster, and the disease seemed less likely to turn severe in people who received hydroxychloroquine than in a comparison group not given the drug. The authors of the report said that the medication was promising, but that more research was needed to clarify how it might work in treating coronavirus disease and to determine the best way to use it…

The study was small and limited to patients who were mildly or moderately ill, not severe cases. Like many reports about the coronavirus, it was posted at medRxiv, an online server for medical articles, before undergoing peer review by other researchers. 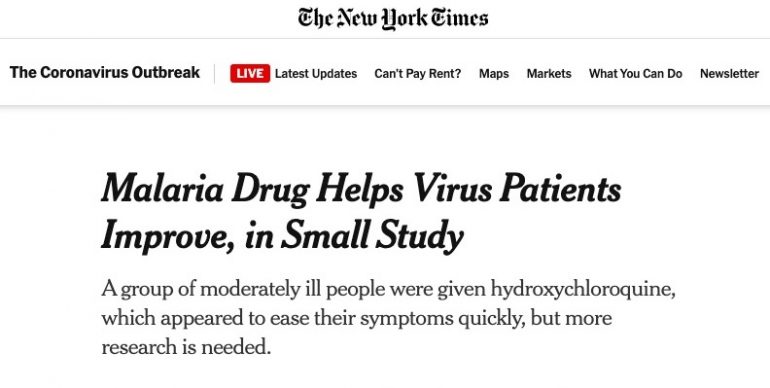 While it’s nice that there’s finally some reporting giving a little hope and not just taking an opportunity to dunk on the President because the Media(D) absolutely loathes the man, it’s important to remember that they were dunking on him unfairly immediately after he mentioned the names of the drugs.

Opinion contributor for Resurgent, Drew Holden, has posted a thread with screen captures of the headlines and some of the tweets. One big one he missed was the Bloomberg article which said that chloroquine can kill in just 2mg.

After even @nytimes has come around to the use of hydroxychloroquine as a potential treatment worth exploring, I took a quick jaunt down memory lane for how others rushed to judgement because Orange Man Bad (THREAD) pic.twitter.com/O66j3WlVPE

Bonus from their “fact checker” @ddale8 who clearly does not understand how this works. pic.twitter.com/rtI5rqKLz0

Tough to see my hometown paper, @BostonGlobe, added to the list. pic.twitter.com/YonnTSLjIP

Listen, I’ve got no idea if this’ll work.

But the key takeaway, in case not obvious: journalists, don’t rush to criticize the president (or anyone else!!) over something we don’t have much information about yet, especially when people’s lives are at stake. Just report.

There is still more testing to be done with chloroquine and hydroxychloroquine, but the point (as Holden made in his last tweet,) is that there were many in the media that were quick to dismiss a possible treatment simply because of who had mentioned it. That kind of bias doesn’t help anyone.

Children Now Being Hospitalized Over Lack of Baby Formula, Thanks To Biden’s Formulamageddon
May 21st, 2022 Conservative Firing Line