Good news! Not every cop is willing to hide behind the ‘only following orders’ excuse when this shutdown panic drives crackpot despotic policies.

In fact, a letter from the Houston Police Officer’s Union is — ever so respectfully — telling a local official to pound sand.

For context, here’s the problem they are reacting to:

The Houston Police Officers’ Union is not shy in expressing how they really feel about Harris County Judge Lina Hidalgo’s order that all residents of Harris County must wear a mask under the threat of fines and prison. Governor Abbot began to lift restrictions across Texas earlier this week. Hildalgo seems to be full of authoritarian glee and is giving Gretchen Whitmer competition for her status as the most hated woman in America.

Hildalgo swept into power by accident, having the good fortune to be on the same side of the ticket as Beto O’Rourke. With no experience, and still a grad school student, Hildalgo was elected to the county’s most powerful seat. The title “county judge” in Texas counties refers to the county executive and not a judge on a bench who presides over cases.

Hidalgo has been doing her best to unleash chaos in her county by trying to release 4,000 convicted criminals from the county jails. That hair-brained idea was blocked by a federal judge earlier this month.

Hidalgo announced her newest edict on Wednesday. It includes $1000 fines and up to 180 days in jail for anyone who will not wear a mask in public even though the infection numbers are flattening out according to Governor Abbot and his medical experts enough to relax some lockdown restrictions. To clarify this insanity, Hidalgo wants to release criminals from prisons so she can fill them up with political dissidents and people who want their liberties respected. — PJMedia [emphasis added]

Yeah. That’s a hard pass, chica. And if police officers aren’t going to ENFORCE your ridiculous rule, it’s nothing but bluster anyway.

“Everyone should be wearing a mask in public, I wear 1 everyday,” union president Joe Gamaldi said in a tweet. “But making not wearing 1 punishable by law, and asking our officers to enforce it, will do irreparable damage to our relationship with the community. We are already stretched too thin without having to enforce this.”

“Should guidelines for masks in confined spaces be emphatically promoted? Absolutely,” Crenshaw tweeted. “But we will NEVER support 180 days in jail or $1,000 fine for not wearing a mask.”

Asked about the pushback, Hidalgo said, “There’s always going to be a minority voice. … People are entitled to their opinions.

“This is not a police state,” she said. “But we needed to make clear it’s not a recommendation, it’s something we have to do for sake of our safety, our lives and our economy.” —Texas Tribune

Here is the letter sent in response to the demand: 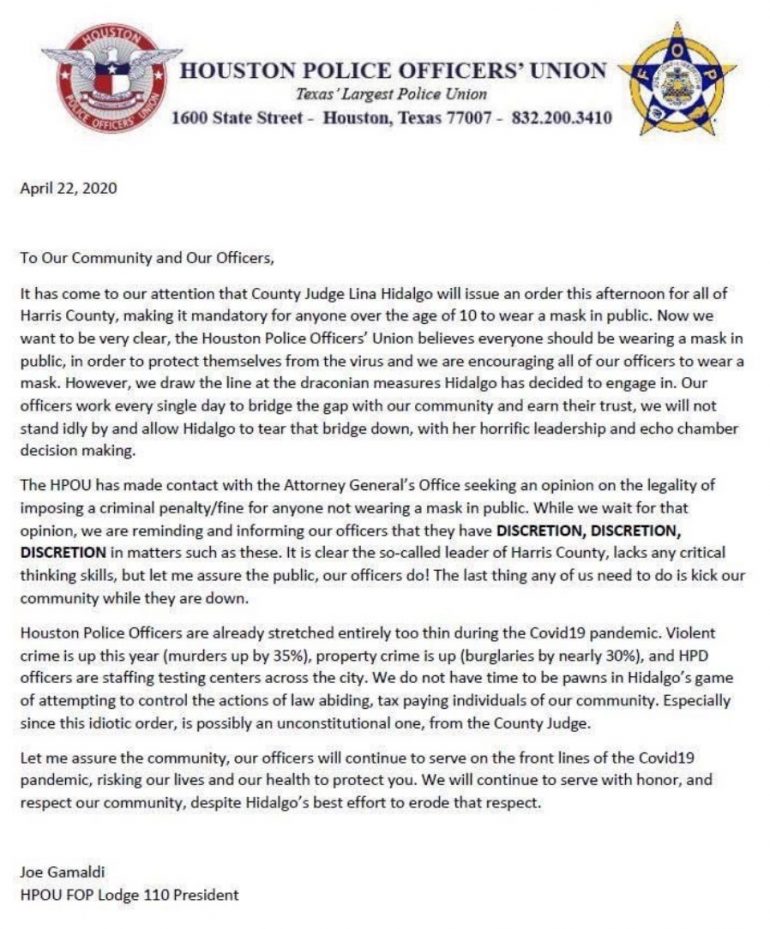 Crime is up, and they’ve got bigger fish to fry.

Instead of trying to throw your authority around and telling free citizens what they must do ‘or else’ have you considered — just maybe — the possibility of using persuasion, and asking nicely?

Nah. Whatever would persuade the Left begin treating voters with such respect? The hoi palois might come to *gasp* expect it!

COVID TYRANNY: ‘Big Brother’ Catches A Trio Of Beer Drinkers On A Rooftop–Tells Them To Surrender To Police (VIDEO)