AOC must feel pretty secure in her position — she isn’t bothering to hide her contempt for the country or the people who make it run.

Like so many ‘good’ socialist before her, she’s willing to make certain sacrifices in order to destroy the system that she literally swore an oath to uphold in order to achieve her ideological long game.

Remember, her Chief of Staff admitted that the Green New Deal wasn’t about the environment so much as overhauling the economy into the form and substance the ‘Democratic Socialists’ WANT to transform it into. And they are not willing to let this opportunity go to waste.

That excerpt was taken from this ClashDaily article.

First, AOC tweeted some unrestrained GLEE when she heard the oil market was tanking. Never mind that this represents workers and families being totally wiped out. Or that the businesses they work for could be permanently bankrupt. Or that we could become more dependent on foreign sources of oil: sources that couldn’t give a rat’s tuchus about grand ideas the left supposedly cares so much about. Ideas like carbon capture, or gender equality for instance.

She has since deleted her triumphant tweet, but not before it was saved for posterity: 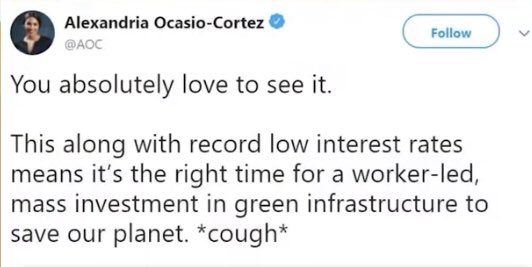 Was she done trying to politicize this crisis? Oh Hell no…

She is doubling down.

GOP is seriously arguing that it’s worth sacrificing the lives of hourly workers so they can get a spray tan again.

Instead they’re fighting against hospital funding.

She doesn’t care about losing it all. Here income is secure, and she’s got no kids to feed. And if things get bad? Just blame Trump, and use blue-collar America’s misery as a stepping stone to power.

The way she sees it, what does she have to lose? She’s from a Blue State. She’s got a career for as long as she wants one. And if she loses her seat? So what, she’ll just take a position as an activist, pushing AOC clones into government positions.

She sees work as a ‘bad’ thing. She’s calling for a work boycott from those people who CAN go back to work.

.@AOC Calls For National Work Boycott Post-Coronavirus: “People should not be going back to work.” https://t.co/9W9ORi0qHR pic.twitter.com/RDXaxZQ5Ow

Because — obviously — the best plan to create a better tomorrow for everybody is to bankrupt the Federal Government, and reinvent the Weimar Republic.

And she offers such sage advice, doesn’t she?

At a time with millions unemployed, and no telling how many of those jobs are closed forever, how long do you think an employer will wait to hire someone willing to show up for work?