When Joe loses in November, perhaps the Obamas could launch a Netflix series called “Joe Says The Darnedest Things.” [Dear Barry: I expect royalties for that idea. DM me on Twitter and I’ll send you my PayPal deets.]

Seriously, though… this is the guy that the Democrats think can beat President Trump?

At what point does the Partisan Press pushing Biden to run for President officially become elder abuse? He doesn’t even really seem to want the job as much as ensuring that Trump doesn’t get a second term.

But now that he’s the only one left, it’s becoming clear why he wasn’t the nominee the other two times that he ran–he is an awful candidate. He’s so bad it’s almost making me nostalgic for Hillary. 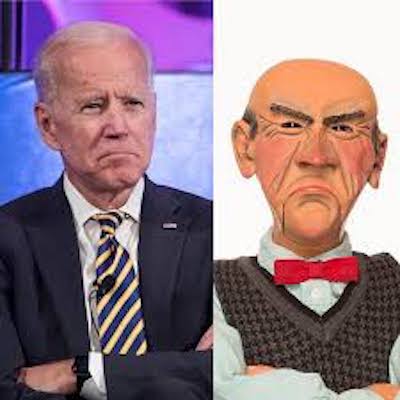 …but he’s also just saying stuff that’s even weirder than what he used to say. These aren’t your normal, everyday Bidenisms.

This one, in particular, is a bit of a spicy one considering that Joe Biden is currently embroiled in a “credible” accusation of sexual assault by a former Senate aide. Other than denying the accusation, he hasn’t said much about Tara Reade.

Using the phrase “economic intercourse” surely brings to mind the allegation of sexual assault back in 1993 that the Media(D) is desperately trying to bury.

But beyond the reference to coitus economicus (H/T @TennantRob), Biden now seems to be flip-flopping on the travel ban that he just flip-flopped on.

Back in January, Biden was adamant that President Trump’s restrictions on travel from China into the U.S. was a prime example of his “hysterical xenophobia” and was completely against it. Later, when the coronavirus spread and devastated New York in particular, Biden backtracked and said that he commended Trump on the travel ban. (That’s clearly not true.)

Now, he seems to be swinging right on back to travel bans are bad and his interminable refrain, “that’s not who we are.”

In an interview with CBS Miami on Monday, Biden said:

.@JoeBiden: What we need is more “economic intercourse” pic.twitter.com/zLa8hqspC0

Does he mean trade?

If he meant trade, why didn’t he just say trade?

Besides, has he not seen the reports that China has been exporting defective medical equipment around the world?

Matt Viser, the national political reporter at The Washington Post tweeted that the phrase “economic intercourse” was one that he had never heard before.

Joe Biden tells @CBSMiami that the United States needs to be more engaged in the world.

Otherwise, he argues, “You’re not going to be able to have economic intercrourse around the world.” (The phrase “economic intercourse” is one that I, for one, have never heard before)

The phrase raised the eyebrows of conservatives on Twitter who openly mocked Joe for it.

Looks like Biden's hoping to get some stimulus going ? https://t.co/IvII54T5YL

Joe Biden has still not directly addressed the sexual assault allegations against him but here he is talking about “economic intercourse”.

I think Hollywood is the world epicenter for "economic intercourse," @JoeBiden. https://t.co/YV7HxGzIBL

Economic Intercourse = We're all screwed. He isn't wrong this time.

This is true. We’ve locked down for too long and we’re all going to have to pay the price.

The price would have been even higher if anyone a Democrat had been in the White House because they were all quick to call Trump a racist for defying the WHO with his travel ban that has been lauded by medical experts as the correct course of action to slow the spread of the coronavirus.

We’ve got six more months of the Media(D) peddling a confused, unintelligible old man who has been “credibly accused” of grabbing a woman’s genitals without her permission, and telling us that he is going to be the savior of America while they memory-hole every gaffe that he makes.

Six months of this crap is a long, long time, especially since many of us are still in lockdown and it feels like we’re living in a mashup of dystopian novels. It’s the epic Brave New World/1984/Animal Farm/Fahrenheit 451/Hunger Games conglomeration.

Here at ClashDaily, we’ve got a solution to some of your problems–at least, the problem of the left pre-chewing the news.

Become a Clash Insider and get the news the left doesn’t want you to see.

Hey, it’s the least we can do.