That seems a bit weird, doesn’t it?

One U.N. Watchdog has exposed the close ties between the World Health Organization and the Chinese Communist Party through the appointment of two WHO Goodwill Ambassadors.

Hillel Neuer, an international lawyer and the Executive Director of United Nations Watch wrote a blistering exposé in Newsweek about exactly who the two pro-Beijing “Goodwill Ambassadors” are. 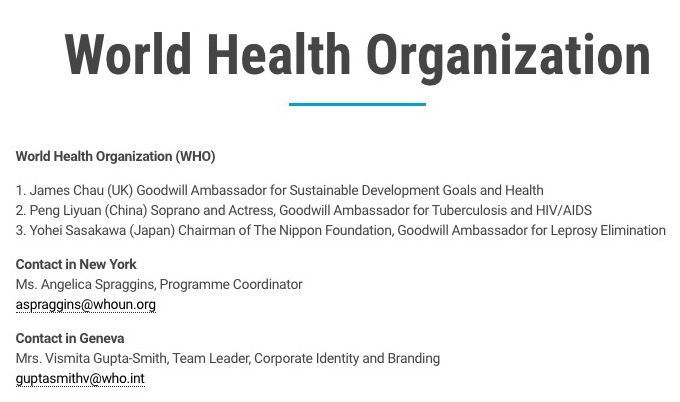 Chau was born and raised in the United Kingdom, is a graduate from Cambridge, and has worked in Beijing for the Chinese Communist Party’s English-language channel on state-controlled CCTV since 2004. In 2016, Chau was appointed by the former pro-Beijing head of the WHO as a Goodwill Ambassador. The appointment term is two years, which means that his term has been renewed twice by Dr. Tedros.

What we do know is that his work is pure propaganda. According to CCTV’s website, Chau’s accomplishments include anchoring “major stories,” such as the annual sessions of the National People’s Congress, which are carefully choreographed pageants of pretend democracy.

Chau now hosts “The China Current,” an online program initiated by the China-United States Exchange Foundation, a registered foreign agent that seeks to sway coverage of China. According to Foreign Policy magazine, Chau’s sponsor is “bankrolled by a high-ranking Chinese government official with close ties to a sprawling Chinese Communist Party apparatus that handles influence operations abroad, known as the ‘united front.'”

Chau aired the forced confession of British private investigator, Peter Humphrey, who was drugged, chained to a chair, locked in a cage, and forced to read a confession. Even the New York Times found it appalling.

Since COVID-19 spread around the globe and became a pandemic, Chau has been running interference for the Chinese Communist Party and defends Beijing at every opportunity, and he’s doing it with the Verified Badge as a Goodwill Ambassador for the United Nations’ World Health Organization.

In the context of #COVID19, one of the key elements in China’s turnaround was discipline: there was a plan, everyone understood what to do, they followed through. Then repeat every single day for weeks. You do what you have to do.

Not everything is “draconian”.

In Chau’s Wuhan Timeline, he doesn’t include the whistleblowers that were silenced, and his series of propaganda videos relating to COVID, he parrots WHO directives and waxes about “openness” and “togetherness.”

So much goodwill all around for the regime that covered up the initial outbreak, punished whistleblowers, and fought countries’ efforts to halt incoming flights spreading the disease. pic.twitter.com/stVIhWFq21

Yes, the wife of President Xi Jinping is also a Goodwill Ambassador for the World Health Organization.

Though she’s not openly an apologist for the regime creating mainstream “news” and all over social media as Chau is, she’s dabbled with propaganda in her own way.

Before her husband’s accession to power, Peng Liyuan was already famous as one of the China’s star singers,

…Nicknamed “The Peony Fairy”, Peng Liyuan joined the Chinese People’s Liberation Army early in her career and made her name as an entertainer approved by the Communist Party, appearing frequently on state television to sing propaganda songs with titles like Plains of Hope and People From Our Village.

“Probably 90% of her songs are complimenting the Communist Party, and the rest celebrates our wonderful life,” explains music critic Qi Youyi, with a hint of sarcasm in his voice.

But, I’m sure that’s just all coincidence, right?

Yes, these are essentially honorifics given as PR, but they do come with that stamp of legitimacy from an international body. Allowing Chinese propagandists that legitimacy is quite a problem. If this were Russia, I’m sure there would be shrieking from the rooftops.

President Trump has been lambasted for criticizing the World Health Organization and threatening to withdraw funding permanently because they’ve been a little too close with China. They covered up for China in the early days of the pandemic, they parroted CCP talking points, and they were simply not critical of the Chinese Communist Party and that put the rest of the world at risk.

It looks like President Trump was absolutely correct in being a bit concerned about the cozy relationship between the World Health Organization and China.