It doesn’t matter how ‘woke’ you are, it only takes one wrong step before your supposed ‘friends’ and ‘allies’ throw you to the wolves. Just ask woke 80s rocker Bryan Adams.

He’s feeling the blunt end of life’s pool cue at the moment, and no amount of his Progressive Pedigree is going to save him.

Adams transgressed a line that (at the moment) is part of a narrative. And transgressing the narrative is an Unforgiveable Sin.

Even his animal-rights and vegan cred are no defense.

He has come face-to-face with the same issue so many of the rest of us in the whole CCP Wuhan Coronavirus crisis. He just wants to get on with living his life and earning a living.

Naturally, ‘earning a living’ by filling stadiums looks a little different than it does for someone driving a truck or waiting tables, but the principle is the same.

This whole WuFlu issue threw a wrench into EVERYONE’s plans. The folks (like many government employees or desk jockeys) who can ride this out comparatively unaffected are mostly interested in the sickness side of this ledger.

Those who are getting hit in their pocketbook, or putting significant plans on hold, are seeing it through a very different lens. And the anger is starting to bubble up. Including Adams.

His tweet has, of course, been taken down now. Here’s a taste of how the world reacted to it.

I didn’t have Bryan Adams going on an unnecessary xenophobic rant during a global pandemic on my COVID-19 bingo card. Did you? https://t.co/luknEQ1Qou

Most of the Left curb-stomped him over it. Others found his criticism of China’s role in this pandemic refreshing. 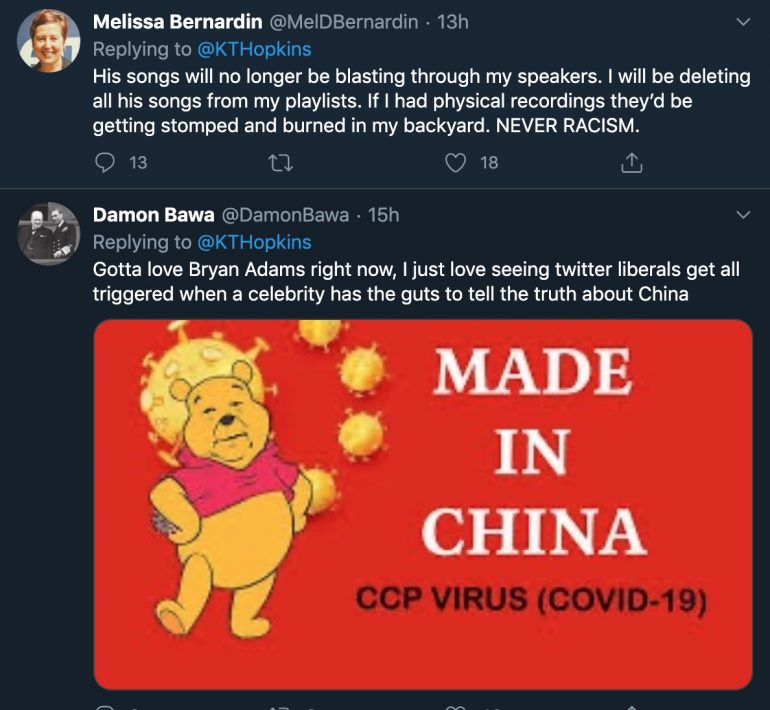 Here is his obligatory apology.

Apologies to any and all that took offence to my posting yesterday,” Adams wrote.

“No excuse, I just wanted to have a rant about the horrible animal cruelty in these wet-markets being the possible source of the virus, and promote veganism. I have love for all people and my thoughts are with everyone dealing with this pandemic around the world.” — IBTimes

What did he say that was so terrible?

Should he have apologized? Some say ‘no’.

The only thing Bryan Adams did this week to disappoint me was apologizing.

Katie Hopkins, herself no stranger to controversy, had a little friendly advice to Adams.

Bryan Adams is probably best remembered for some of his hits from the 80s: songs like ‘Cuts Like A Knife’ (which he referenced in his tweet), ‘Summer of ’69’, ‘Everything I Do, I Do It For You’, and ‘Have You Ever Really Loved A Woman’.

To be honest, it is a little satisfying to see the perpetually-offended leftist Cancel Culture turn on their own.

Realistically, the most likely way to bring that totalitarian cancel culture impulse to its knees is by unmasking its true diabolical nature. That would require the Left seeing friendly fire destroy some people they really like, showing them how destructive it really is for a supposedly civil society.