It seems like the closer November gets, the more Fake News there is out there in the Media(D).

It was just a few days ago that Serious Journalists™ were retweeting a deceptively edited video from a late-night comedy show as news.

How embarrassing for our Media(D) betters!

But then, Serious Journalist™, Chuck Todd, uses another deceptively edited video to take Attorney General Bill Barr outrageously out of context and make it appear that he was saying precisely the opposite of his actual comments.

But don’t worry, this next incident wasn’t just a couple of New York Times reporters, Vox journos, NBC’s Andrea Mitchell, one of CNN’s White House correspondents, and Meet The Press’s Chuck Todd that crapped the bed–it was that stalwart of investigative journalism, CBS’s 60 Minutes.

In a clip critiquing the Trump administration’s response to the COVID-19 pandemic, they completely misrepresented Secretary of State Mike Pompeo’s comments regarding the origin of the coronavirus. In a clip that 60 Minutes played, while a voiceover says, “Last Sunday, Secretary of State, Mike Pompeo, attempted to resurrect a debunked theory that this virus was man-made in China.”

This was immediately following the claim that the United States was “leading the world” in infections and deaths. if 60 Minutes believes that, then we have a real problem with investigative reportage here in the U.S. No “journalist” worth their salt would believe China’s numbers regarding COVID-19. They have lied from the beginning and are lying now. They’re even trying to silence the survivors of the virus and the families of the deceased.

But then, we’re talking about the Media(D) who has such a hate-on for the President that they’ll pretend that he told people to drink bleach and inject Lysol into their veins. Oh, wait! 60 Minutes pretty much did that, too. In their attempt to show “both sides” they critiqued both the Chinese response (a little) and then hammered the Trump administration for praising China, then failing to “meet the need” with testing and equipment.

Where do you even begin with this fresh, steaming pile of “fake news”?

Ah, just watch it and we’ll do the analysis after:

As the U.S. took the lead for illness and death from coronavirus, the White House moved the focus to the Chinese government. Last Sunday, Secretary of State Mike Pompeo attempted to resurrect a debunked theory that the virus was man-made in China. https://t.co/MZbfe4LeXi pic.twitter.com/bIjTRfboTg

Before we get any further, here’s a screenshot for posterity: 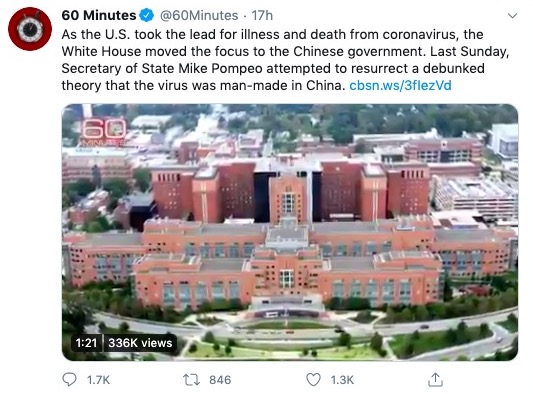 First, to believe a single thing that the Chinese Communist Party says without verifying it is absolutely ludicrous. The CCP is a proud, deceptive, amoral organization that will do or say anything to make themselves look good. They even started preparing for a spike in domestic cases of the virus by feigning concern that travelers were bringing the infection back to China after they were reporting a rapid drop in the number of cases.

Then they criticize the Trump administration for not following science–but according to both Dr. Fauci and Dr. Birx, the President listens, considers, then makes decisions on their recommendations. Perhaps 60 Minutes recalls that Trump had wanted to begin reopening for Easter, but that was quashed. He ramped up the production of respirators because that was what he was told was needed, and he’s now being criticized for a ventilator “surplus.”

Then we come to the Secretary Pompeo quote where they allow him to be heard saying “That’s where this began…” and then they claim he’s spreading the “debunked theory” that the virus was man-made.

Intelligence agencies around the world are saying that it appears that this was an accident that occurred in a lab that was well-known for its lax security measures.

How about I make it easy for 60 Minutes and just play the whole damned clip to show that they’re full of crap?

Here is the clip of Mike Pompeo on This Week picking up where Martha Raddatz asks about China:

Matt Lewis of The Daily Beast tweeted his disgust for the “mistakes” that the media has been making lately.

Ugh. The Chuck Todd/Bill Barr thing comes on the heels of the Jimmy Kimmel/Mike Pence thing…. We all make mistakes, but the media’s zeal to push back on Trumpism is ironically reinforcing Trump’s dangerous “fake news” narrative…

Poor Matt! While he calls these “mistakes” he also finds it troubling because in the Media(D)’s kneejerk reaction to discredit the President is “ironically reinforcing Trump’s dangerous ‘fake news’ narrative.”

What Matt and those of his ilk fail to understand is that these mistakes only ever go one way–there has never been a single story in nearly 4 years that has inadvertently been in President Trump’s favor. It’s not looking like these are “mistakes.”

The problem for Matt Lewis, Chuck Todd, and all the journos breathlessly tweeting clips of Jimmy Kimmel, is that President Trump is right–they are “Fake News” and “Fake News” is indeed the Enemy Of The People.

They’re just so dishonest that they can’t even admit it to themselves.