Joe is doubling down on his support of the Obama-era rule that eliminated due process for the accused.

On Wednesday, Education Secretary Betsy DeVos announced new guidelines for handling complaints of sexual assault, harassment, and misconduct in K-12 schools and institutes of higher learning. Secretary DeVos began an overhaul of the Title IX system in 2017, and it is finally complete.

Under the Obama administration, the Title IX protections against gender discrimination, including sexual harassment, morphed into a system that operated kangaroo courts over any instance of “unwelcome conduct of a sexual nature.” It essentially removed due process rights to the accused and often left them unable to refute the charge.

Now, under reworked federal rules, alleged student perpetrators will have added protections, including the presumption that they are innocent throughout the disciplinary process and the right to be provided all evidence collected against them. Those students can also cross-examine their accusers and vice versa during live hearings, although it must be done through a lawyer or representative.

They come after the Education Department “heard from too many students whose careers were tarnished by administrators without any resemblance to due process,” Kenneth Marcus, the agency’s assistant secretary of civil rights, told reporters. “This must stop.”
Source: NBC News

The new rule narrows the definition of sexual harassment, brings back the presumption of innocence for the accused, gives them the ability to cross-examine their accuser, and challenge the evidence against them. Basically, it restores due process rights to the accused, which is consistent with the standard used in our justice system.

Schools may now choose between two evidentiary standards–either by a preponderance of the evidence or by clear and convincing evidence, but it must be the same for both students and employees.

Under the Obama-era rule, schools were restricted to only use “the preponderance of the evidence standard. This was often described as “51 percent certainty” that the facts are true.

“Too many students have lost access to their education because their school inadequately responded when a student filed a complaint of sexual harassment or sexual assault,” said DeVos in a statement. “This new regulation requires schools to act in meaningful ways to support survivors of sexual misconduct, without sacrificing important safeguards to ensure a fair and transparent process. We can and must continue to fight sexual misconduct in our nation’s schools, and this rule makes certain that fight continues.”

Soon after the announcement was made, the Biden campaign–in a stunning self-awareness fail–issued a statement saying that Biden is committed to reverse the DeVos rule.

In a statement, Biden said the new rule was an effort by the Trump administration to “shame and silence” survivors of sexual assault.

“It’s wrong,” Biden said. “And, it will be put to a quick end in January 2021, because as president, I’ll be right where I always have been throughout my career — on the side of survivors, who deserve to have their voices heard, their claims taken seriously and investigated, and their rights upheld.”

In light of the accusation made by Tara Reade, this is quite a statement by the Biden camp.

He ignored the accusation for as long as possible, aided by a biased media, and now feminists are coming to his defense–sorta. Many, like noted feminist attorney Lisa Bloom, are saying that they still “Believe All Women” but are going to vote for Joe anyway because he’s the best shot at defeating Trump. It’s a shocking thing to see the mask ripped off and their partisanship exposed. 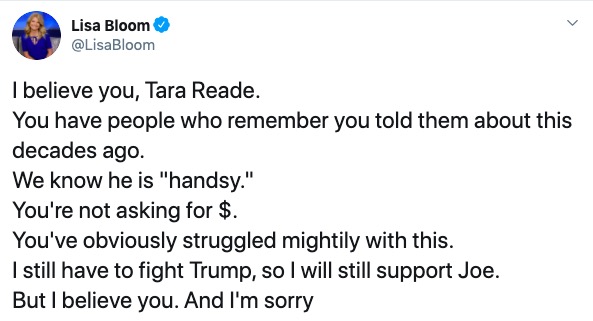 When Joe finally did address the accusation, he denied it, but it was an absolute train wreck.

Then Mr. “Ignored The Accusation For As Long As Possible” Biden said that the new rule would allow colleges to “ignore” sexual violence complaints. This is apparently a Very Bad Thing that must not be done… unless you’re a Democrat running for President.

Biden said the DeVos rule “gives colleges a green light to ignore sexual violence” on campuses and would “strip survivors of their rights.”

“It lets colleges off the hook for protecting students, by permitting them to choose to investigate only more extreme acts of violence and harassment and requiring them to investigate in a way that dissuades survivors from coming forward,” Biden said.

“Survivors deserve to be treated with dignity and respect, and when they step forward they should be heard, not silenced. Today, Betsy DeVos and Donald Trump published a rule that flies in the face of that belief and guarantees that college campuses will be less safe for our nation’s young people,” he added.

Under the Obama-era rules, with just the accusation made by Tara Reade, Biden would be considered guilty of sexual assault. Period.

The Trump campaign said that Biden is trying to hold students to a different standard than himself. Biden last week denied allegations of sexual assault made by Tara Reade, a former staffer in his Senate office in the early 1990s.

“Biden should cut the malarkey and provide an honest answer to Americans – why shouldn’t he be held to the same standards he spent years imposing on everyone else?” said Trump campaign spokesman Andrew Clark. Source: The Hill

If the presumption of guilt, a complete lack of due process, and the accusation itself was enough evidence to destroy the future of college students and was used by sitting Senators now hoping to be Biden’s running mate against a Supreme Court nominee, why shouldn’t we hold the presumptive Democratic nominee to the same standard that he wants to be imposed on others?

Simple–because conservatives truly believe that the accused also has rights. It’s part of what makes America great.  Joe Biden clearly doesn’t seem to think so if he’s so committed to the “fundamental transformation” of the country. He’s fine with one set of rules for him and one for the rest of us. That is clearly not American.