Finally, the Cops have had enough with being used as the ‘enforcers’ of ridiculous and entirely unenforceable demands placed by the government on the citizens.

While we would have hoped for stronger words, something like ‘the oath we swore to uphold is not a mandate to uphold the capricious whims of petty tyrants, for even the most (supposedly) well-intentioned of illegitimate demands.’

But at this point, any pushback at all is a step in the right direction.

Officers from the New York Police Department have decried city officials “get cops out of the social distancing enforcement business altogether,” following backlash stemming from a violent confrontation with police over the weekend as officers tried to enforce the rules.

Patrick Lynch, the president of the Police Benevolent Association, lambasted city leadership, saying officers have received “nothing but vague guidelines and mixed messages, leaving the cops on the street corners to fend for ourselves.”

…As the weather heated up in New York City, the police department dispatched 1,000 officers on Saturday to break up large gatherings and enforce social distancing rules intended to protect against the spread of COVID-19.

Officials said over 112 summonses were issued in the city over the weekend for failing to obey social distancing orders and at least three people were arrested. — FoxNews

The impossible regulatory demand that police enforce social distancing was the flashpoint in the incident where one Officer pointed his taser at a bystander, before getting into an altercation with, and arresting him, as well.

There hasn’t been consistency in expectation, either. 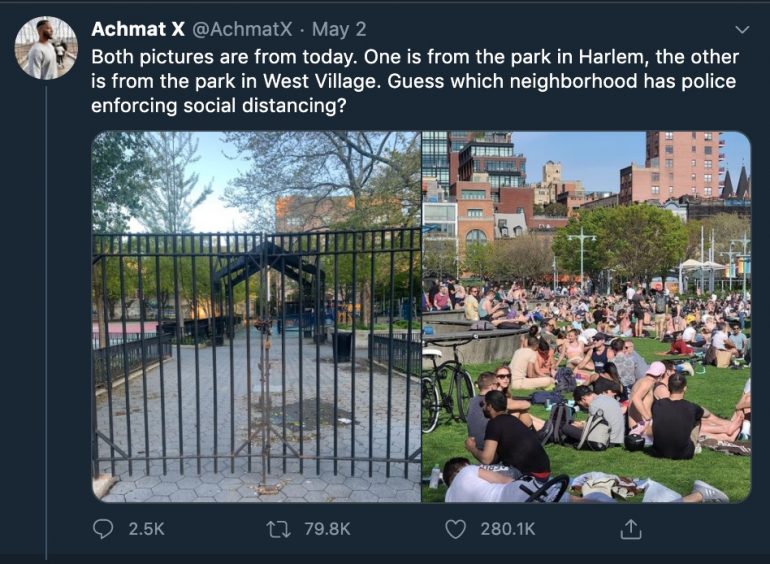 The photo above sets up the contrast between two New York neighborhoods. The race card gets played, but there may be any number of different illegitimate reasons for the unequal treatment stemming from motives besides race.

For example, the ‘do you know who I am’ card that some folks are more than willing to play, making life miserable for an ordinary cop trying to do his job.

He had more pictures of crowds milling about in West Village. 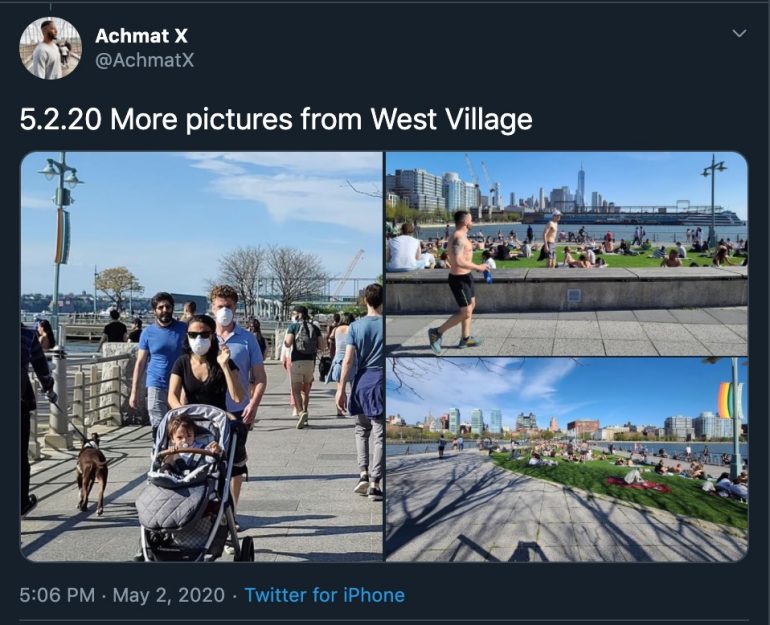 Still, Lynch said in a statement Monday: “Nobody has a right to interfere with a police action. But now that the inevitable backlash has arrived, they are once again throwing us under the bus.”

Tensions between police and de Blasio have been ongoing but officers have taken on an additional and unprecedented role of enforcing measures to protect the public’s health. — FoxNews

How about, with the new bail policy and so many criminals having been let out of Rikers’ Island, we let the police do the work of keeping us safe from criminals, rather than bothering people with the fool’s errand of measuring the distance between strangers.