It takes a special kind of petty petulance to rage at someone after they have given you charity.

A fine specimen of such petty petulance can be found in New York now that the city is no longer living in fear of their hospitals being swamped by disease.

Samaritan’s Purse — a group specifically named after the Christian parable of the Good Samaritan, which teaches the importance of demonstrating altruistic love and kindness toward individuals and groups that are normally hostile to one another — voluntarily ventured into the eye of the hurricane in New York, where the Coronavirus crisis had hit hardest, and offered free supplemental medical treatment alongside Sinai Hospital in Central Park.

Now that the threat has subsided, how are city officials in New York showing their gratitude? By insulting the very people who stepped up, donned the PPE, and provided care to the profoundly sick never knowing if ‘today’ would be the day they contracted the very virus they helped a struggling city stay ahead of. Meanwhile, many government officials sat safely at home, overseeing their little kingdoms through the miracle of teleconferencing.

The Christian charity had partnered with Mt. Sinai Hospitals to set up a field hospital in Central Park, where it treated hundreds of patients unable to obtain treatment anywhere else. Last week, the field hospital’s number of patients decreased dramatically, and the speaker of the New York City Council saw an opportunity.

“This group, which is led by the notoriously bigoted, hate-spewing Franklin Graham, came at a time when our city couldn’t in good conscience turn away any offer of help,” Speaker Corey Johnson said in a statement on Friday. “That time has passed. Their continued presence here is an affront to our values of inclusion, and is painful for all New Yorkers who care deeply about the LGBTQ community. Mount Sinai must sever its relationship with Samaritan’s Purse. “

So much for gratitude.

Notice that Johnson’s statement doesn’t include a single allegation of wrongdoing on the part of Samaritan’s Purse or anyone else. And that’s because the Christian organization has not committed any wrong that Johnson can identify. Indeed, the group has gone out of its way since opening its field hospital to make it clear that all people are welcome, regardless of ethnicity, sexual orientation, or religion.

“We do not discriminate” against anyone who is sick, and “we never have,” Franklin Graham, the charity’s founder, said last month after he signed a memorandum of understanding with Mount Sinai, ensuring that his field hospital would not discriminate among patients. Even New York City Mayor Bill de Blasio admitted he had been offered similar assurances by Samaritan’s Purse and Mount Sinai affiliates. — Examiner

It didn’t end there. That statement was posted as a rant on Twitter against the very group that had stuck their necks out to serve and save New Yorkers who badly needed the help. 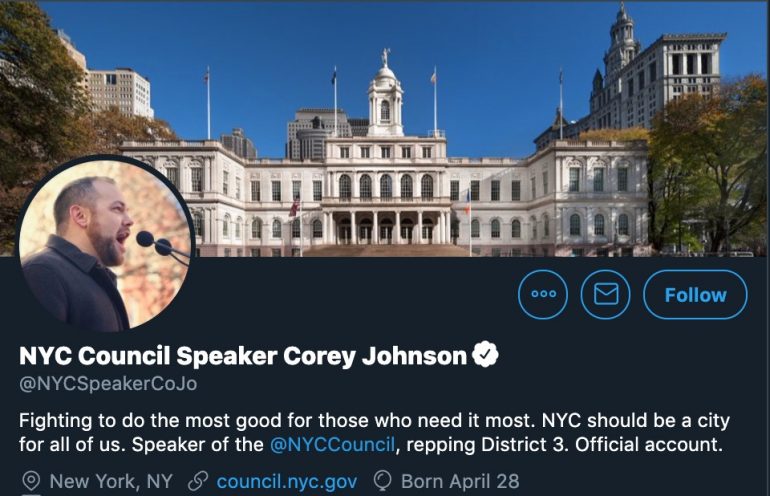 Let’s parse his words a little.

‘Couldn’t turn away help’. — Translation: There was something in it for us, so however much we hated them for it, we were obliged to accept their help. (Oh, kinda like what happened to that guy who had been attacked in the parable, eh?)

‘that time has passed’ — Translation: Now that we’ve already sucked everything we could gain out of this relationship, we can chase them away like a stray dog.

‘an affront to our values of inclusion’ — Translation: when they say that our moral hierarchy is in conflict with Gods’, that offends us. Anyone who offends us is a heretic to our Secular moral hierarchy. Heretics who dare speak out against secular dogma are unwelcome in this city — and we dress up our totalitarian Secular Inquisitor’s behavior in the rainbow hues of ‘inclusion’.

(Of course, if you happen to be Muslim, you are exempt. This may be for one of two reasons: either because we’re so self-absorbed that we’re ignorant of your sincerely-held moral beliefs, or, more cynically, because we’re really afraid of offending a powerful voting block.)

What this writer took as the most outrageous of a string of outrageous statements was this one:

Mount Sinai must sever its relationship with Samaritan’s Purse.

Lemme get this straight. An elected official thinks he has the right to tell one group of people who they can and cannot associate with? “Must Sever????” Is that a THREAT, counselor?

What kind of petty tyrant thinks he can personally supersede the First Amendment provisions of the right of free association? THIS kind.

There was a lot of back-and-forth in the comment thread, but one, in particular, stood out.