I pay for my mistakes. That is why I try so hard to learn from them. It is too expensive to make the same mistakes over and over, unless you’re a member of the elites. A medical model of the flu was wrong and our elites put 20 million people out of work in the USA. Democrat mayors with a Democrat police chief failed to train and discipline their police officers, so a black man was murdered. That was wrong, and people protested. Then, those protests were taken over by Antifa thugs who wanted to destroy businesses as a political statement. Some mayors and governors stopped that lawless violence, but other politicians let the riots continue. The media fanned the flames of the false narrative. None of the elites paid a price for being so wrong. We paid the price.

Today, we need to be smart enough to sort truth from lies. The good news is that we can, but it isn’t easy. 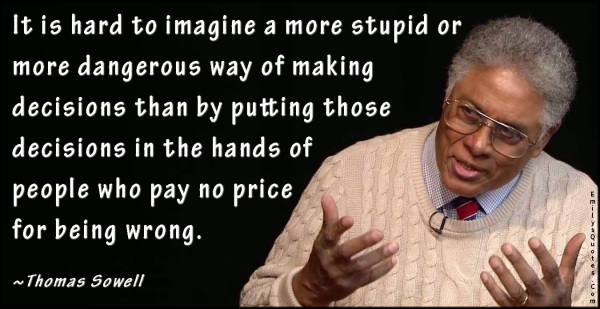 Politicians made horrible decisions in the case of the Wuhan flu. Masks were essential, then masks were useless, then masks were the latest sign of virtue signaling. Politicians released violent prisoners to keep them “safe”, and then the same politicians put business owners in jail because they opened their shops without a government permission slip. Ham-fisted politicians increased the unemployment rate almost ten-fold and ignored the number of lives that cost us. We paid the price for their mistakes.

Protesters who objected to this government overreach were fined for carrying signs in public. Gay bars were “essential businesses”, but churches were not. Neighbors called the cops after seeing a plumber’s truck in front of their neighbor’s house. Cops were called to verify that there was a leaking toilet. That self-righteous indignation gives me the shivers.

The definition of socialism is that the government controls business and public activity. We just had our free 90-day trial of Socialist control. People who said they were “pro-choice” showed themselves to be intolerant of diversity. We sold our freedom for security when we faced a bad case of the flu.

Looking at the number of people who die each year from of the flu was our first clue that this was never a dangerous epidemic. So were the number of Covid deaths in Japan and Sweden where both countries refused to establish a lockdown. That data was out there after the first weeks for everyone to see. This “epidemic” was, and remains, a disaster caused by politicians acting badly and a news media selling sensationalism.

The Murder Of Innocent Men And Women By The Police

Police unions have immense power. That is particularly true in our large Democrat-controlled cities. As an obscene example, a police officer was suspended after he refused to act during an armed attack on a Florida high school. That officer was reinstated on the force, along with receiving back pay.

Recently, a Minneapolis police officer kneeled on George Floyd’s neck until Floyd died. That police officer had a long history of complaints filed against him. The police chief, the district attorney, and even the county attorney didn’t press charges and have the officer retrained or removed. They did the politically easy thing rather than doing the right thing. Our sad history shows us that these politicians are not alone.

The cops I know are awesome, but not all of them are. There is also a long list of innocent people who were injured or killed by the police. Finally and fortunately, Judge Clarence Thomas, a brilliant black man who sits on the US Supreme Court, said it was time to reexamine the statute of qualified immunity that keeps officers and politicians from being charged for official misconduct. Thank you, Judge Thomas! The death of George Floyd might be the catalyst for change that is both needed and overdue. Politicians and police unions oppose it.

The Riots Must Go On

Honest citizens were outraged by Floyd’s death. They protested in cities across the country. They deserve our thanks. Those protests were diverted by other organizations for their own ends. Black Lives Matter and Antifa turned protests into riots and looting. They delivered bricks to the scene of the riots. Lawyers from New York delivered Molotov bombs to rioters. Sincere protesters became pawns. Their cause was used by the political and media elites.

Some politicians and news commentators said that riots were desirable. Those riots killed black store owners. Looting destroyed the future of many more black business owners. Note that politicians, academics, and the news didn’t lose their homes or their businesses to looters.

Our elites said the riots were unavoidable, but some responsible communities not only avoided them, but stopped them when they started. You have to read past the headlines to find their stories, but some communities protected their police, protected their stores, and threw Antifa out of town. That news doesn’t fit the story they want to sell, so CNN hardly covered it. Read deeper to find the truth.

Note that Hollywood celebrities, as well as staffers from the Biden campaign, put up bail money for people who were arrested during the riots. In contrast, the business owners who lost their stores to looters were supported by individual go-fund-me campaigns.. and by staffers from the Trump organization. That tells me who is willing to invest in our community, and who needs violence to fit their political narrative. Study the political situation and come to your own conclusions.

It looks like Democrats and the elites need to blame violence on Trump. Democrat politicians said the ongoing “epidemic” was too severe to allow business owners back into their stores, but not so severe to stop riots. Those politicians said that police were outnumbered so there was nothing they could do to stop looting and arson. Then, the same politicians told us to call the police rather than defend ourselves.

We’ve paid enough. Don’t sacrifice your future to their story.

If we read past the headlines then we can detect self-serving lies. We can and should shame our elites when they lie to us. We have to hold politicians and the media accountable because they won’t do it themselves.