Proving once again that Chelsea Handler is an awful human being, she finds nice things to say about a known racist.

The 45-year old comedian doesn’t have any nice things to say about the First Lady, but the guy who has repeatedly called Adolf Hitler “a very great man” has taught Handler a few things about race relations, apparently.

On Sunday, Handler shared an old video clip of Louis Farrakhan on the Phil Donahue Show to her 4 million Instagram followers.

The 45-year-old comic took to Instagram on Sunday and shared an old clip from “The Phil Donahue Show” where Farrakhan was taking questions from the audience.

In the clip, Farrakhan takes questions from the audience and his racism is on full display. One woman asks why we have to divide by labeling people based on skin color and instead just “come together.” Farrakhan says that the desire for unity is good, but reality is the “total opposite.” He asserts that white Americans view black Americans as “second-class or inferior citizens” which only reinforces “black inferiority” that was imposed on them centuries ago by erasing the heritage and names of Africans brought over during the slave trade. Farrakhan says that “white culture”, religion, and the English language were all fored on African Americans.

Handler is apparently too thick to recognize it as racism because she says that she “learned a lot from watching this powerful video.”

I learned a lot from watching this powerful video.

Several Instagram users slammed Handler for sharing a video praising Farrakhan. One replied, “So, based on this logic, if you find a video of Hitler saying something positive and powerful, will you feel equally compelled to share it? You gave hate credibility and a large platform today.”

Handler responded, “No, because Hitler was responsible for killing millions of lives. Farrakhan is just responsible for his own promotion of anti-Semitic beliefs. They are very different.”

She added, “Another thing: perhaps Farrakhan’s anti-Semitic views took form during his own oppression,” she wrote. “We know now that oppression of one race leads to an oppression of all races.”

Chelsea is known for deleting her posts, so here are screenshots of her interaction with the person who called her out and asked if she found a positive speech by Hitler if she’d post that, too. 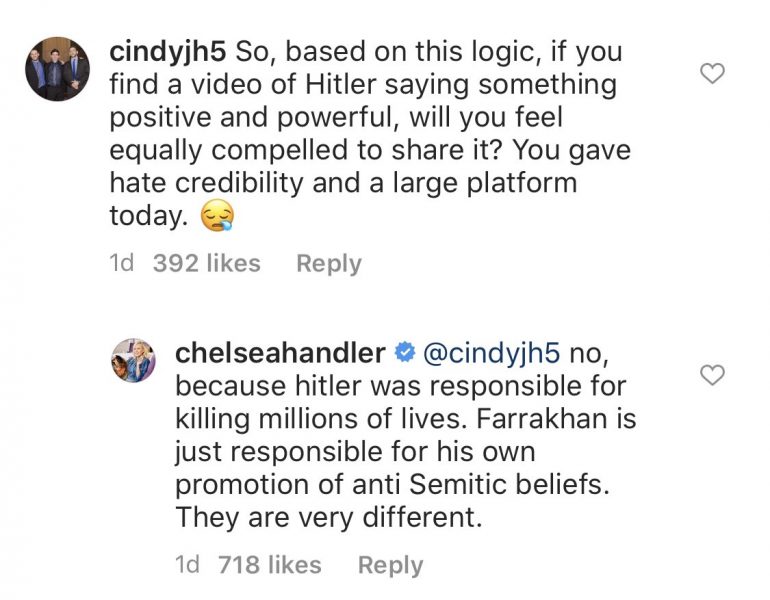 Don’t you just love how she excuses decades of anti-Semitism by Farrakhan in precisely the way that he was excoriating the audience for viewing African Americans? She’s literally saying that you can excuse his racism because he was oppressed. He gets a pass to be anti-Semitic because she has lower standards of behavior for “oppressed people” than for non-oppressed people. That’s what we call the “soft bigotry of low expectations” and it is, indeed, racism. It’s a prevalent view on the left and espoused by folks like Chelsea Handler.

Farrakhan has made his money race-hustling. He boasts a net worth of about $3 million. Not bad for a hate-preacher, eh? Yet, he still talks about the oppression of black Americans.

He’s spewing the same hate that he has for decades, and leftist chumps like Handler eat it up.

Chelsea Handler is so unbelievably awful.

But then, we already knew that about her.

We also know that Louis Farrakhan is a vile racist and his anti-Semitism gives rise to other anti-Semites.

Any celeb offering praise of David Duke would suddenly be history's greatest villain and never work again. But Louis "Hitler was a great man" Farrakhan is different because… reasons? https://t.co/7YEcYnq6EF

At least you know exactly who she is now.