They will still serve as cops, but no longer as SWAT. They allege that even the safety of the police dogs are taken more seriously than theirs.

When leaders habitually throw their subordinates under the bus, it isn’t long before those subordinates stop following.

Their police chief knelt along with the BLM protesters who have been spraying ACAB (All Cops Are Bastards) on bare surfaces all across the country, a group whose demand include defunding the police. Not surprisingly, the actual rank and file cops didn’t appreciate the gesture.

A south Florida police department’s entire SWAT team resigned Friday, citing the chief of police’s decision to take a knee with protesters calling for an investigation into a 2014 raid in which a black man was fatally shot.

The ten-person team handed over an angry letter of resignation to the Hallandale Beach police chief in which they took aim at Vice Mayor Sabrina Javellana for comparing them to the Minneapolis Police Department that killed George Floyd. —DailyMail

For one thing, that raid has already BEEN investigated. For another, invoking a comparison to 4 officers facing criminal charges for 2nd Degree murder is a HELL of an allegation to make against police officers. Making it casually can only further inflame tensions between cops and the public. And when public officials are throwing cops under the bus to make themselves good, that is obscene. Especially when doing so will only increase public antagonism toward them.

Here is the resignation letter. It is ‘clickable’.

New: Just obtained the resignation letter from members of the Hallandale Beach Police SWAT unit, who are resigning from SWAT, but not the entire PD, in response to their chief taking a knee with #blacklivesmatter protesters pic.twitter.com/qQq8rHIBED

Below is a screenshot of the resignation letter.

The Key takeaways are: 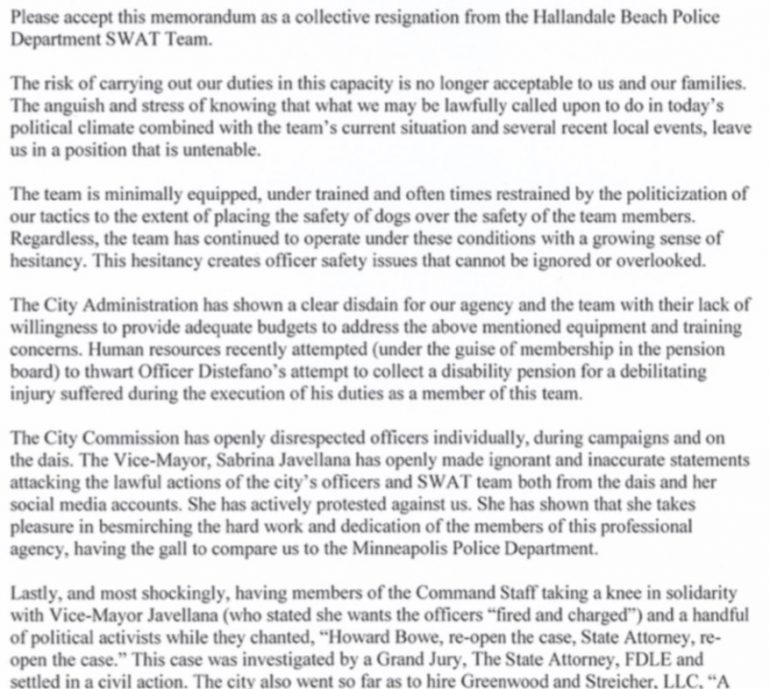 Check out ClashRadio for the wit and wisdom of ClashDaily’s Big Dawg. While you’re at it, here’s his latest book: