Ever notice the folks who have the worst opinions about downtrodden neighborhoods are often the ones with the least to lose when things go badly?

We call them Champagne Socialists. They are the folks who cheer on Sanctuary cities, the early release of violent convicts, or shutdowns and recessions — as long as they’re locked up tight in their elitist world, free from any direct consequences of their ideas.

For example, when Minneapolis was burning down, one NBA player cheered them on.

His name Chris is Martin Palmer. 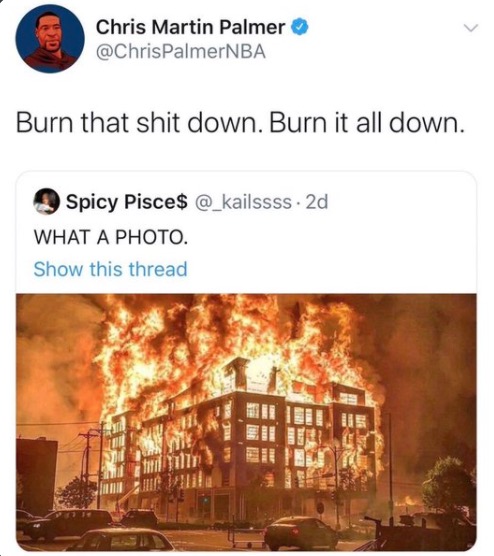 Yeah. He didn’t know that this was low-income housing being built to help… well, know, people with low income.

Like so many of our ‘betters’, you can actually WATCH the guy’s position evolve to fit the ideas he’s supposed to have.

When he thought it was ‘woke’ to cheer the looting and burning, he cheered it on. Watch his public position morph into what he’s pressured into thinking.

Suddenly, when it’s his ass and property on the line and he changes his tune.

Here he is weighing in on what makes for a legitimate or illegitimate target for rioting.

Aww… suddenly, he’s distinguishing between criminals and protesters. What changed his mind?

Long ass way away? Maybe from a different part of the city… might even be folks who can’t even afford a cup of fancy coffee in your part of town.

He was hanging out with the regular protesters that afternoon.

What happens when someone tells him that he’s been cheering the destruction of low-income housing?

So which is it, Chris? Is it cool to rip up shit? Or do real protesters not loot?

Maybe you need to ask around for which of those answers is the ‘woke’ answer of the day.

“The guy in the gated community enthusiastically encourages riots that someone else will suffer the pain from, sh*ts his pants when the violence comes down his street. Same old Champagne Socialist story.”