Thrown out of the protest that was supposed to prove his woke credentials, Jacob Frey learned Churchill’s hard lesson in a hard away. “An appeaser is one who feeds a crocodile, hoping it will eat him last.”

Somebody up and moved the goalposts on him.

He was ‘woke’ enough to line dance with the protesters. (There’s even video, ‘To the Left, To The Left) that we won’t inflict upon you. He was woke enough to join a BLM protest, and to repeat back all the slogans.

But then they put him on the spot… will you, as mayor, push forward this new policy we have just demanded? They just want one little thing… the defunding of the police.

What rational mayor would agree to such a demand from an angry mob? He didn’t jump when the mob said jump.

They didn’t get the answer they wanted… and suddenly, the hero of the party was all but tarred and feathered and run out of town on a rail. Persona Non-Grata.

“Go home,” protesters yell at Minneapolis Mayor Jacob Frey because he said he doesn’t want to defund the police
pic.twitter.com/00MIM60P5L

The sad puppy had to do a long and embarrassing walk of shame through a sea of hostile faces.

How embarrassing. This is hardly the FIRST time a supposedly ‘woke’ politician got roasted in public like this. Remember Canada’s elected weasel, Justin Trudeau? The guy with the fancy socks, who likes talking about other world leaders behind their backs?

Well, he got busted too. Like Gov. Northam, he got away with having worn blackface… because he was a liberal, and the press did their job in damage control. Safely on the other side of a re-election run, he probably thought all was forgiven and forgotten as he went to ride the coattails of the now-international George Floyd-themed BLM protests.

As it happens, all was neither forgiven NOR forgotten.

According to Newswars, Trudeau joined protestors outside the Canadian Parliament who were there to rally support for the Black Lives Matter movement in the US and over the death of George Floyd, a black man who was killed during his arrest by a white police officer in Minneapolis, Minnesota. Trudeau did not speak at the event but he was seen clapping and nodding his head in agreement with those who were speaking and with chanting.

When Trudeau decided to take a knee his supporters hailed him as he very well may be the first world leader to have done so but his own troubling past came back to haunt him. Some hecklers can clearly be heard in a video of him at the event yelling, “Go home, blackface!” The jeer is in reference to multiple photos of Trudeau wearing the offensive blackface makeup on multiple occasions. — RightCountry

Even a Liberal darling who agrees with all the issues he is supposed to care about, right on cue, can’t escape the wrath of everyone coming for their pound of flesh. 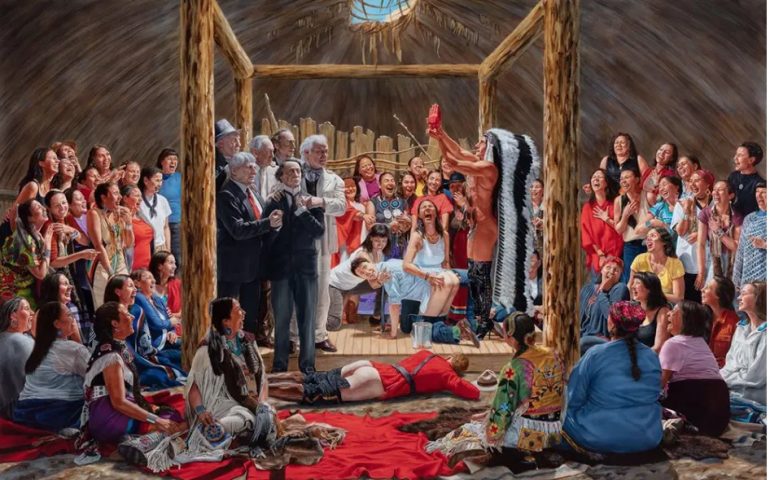 Even a ‘good liberal’ was strung up for not doing enough about another issue… a series of crimes and murders targeting native women in Canada.

Turns out, one artist isn’t happy with what Trudeau is or is NOT doing about it. And featured him ‘in a consensual’ sexual act on his hands and knees with his pants down, and a native guy holding an improbably large object aloft in his hands with the intended use of that object pretty obvious.