The data doesn’t lie: demonizing Hydroxychloroquine jacked the body count WAY up. Be sure to ‘thank’ those shrill Trump-hating voices for each and every dead relative.

You know the story by now, don’t you?

Medical Journal ‘The Lancet’ published a study in France indicating some success in treating Coronavirus with a safe, cheap, decades-old antimalarial drug.

Trump made reference to that study, calling it hopeful news. It turns out, after all the indignation and rage directed at him and anyone else who spoke favorably about this treatment option, that it really WAS an effective treatment.

We have data showing trendlines comparing use of this drug and the GLOBAL fatality levels. Note this graph covers the periods before, during and after the ‘medical’ study discrediting HCQ was disavowed as unscientific, and the use of HCQ was first suspended and then restored. 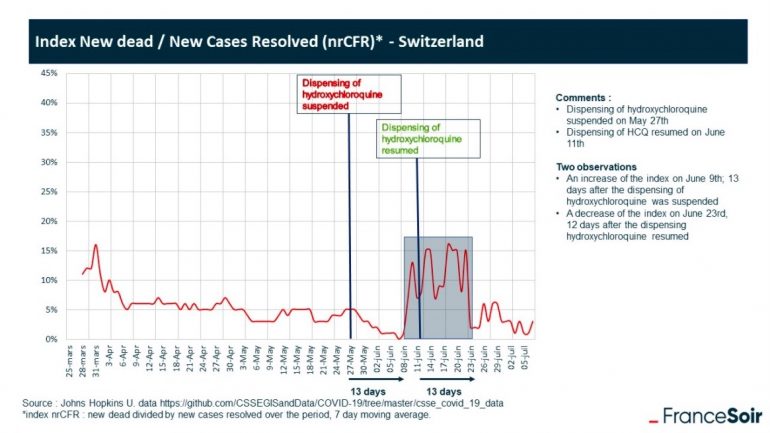 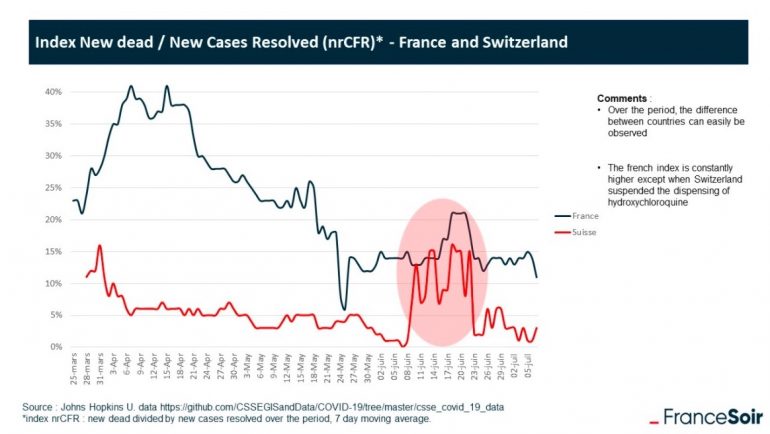 In their need to demonize Trump at every turn, this drug suddenly became the personification of evil. Anyone mentioning it was instantly demonized. Doctors who would prescribe it, or pharmacists who would dispense it were harassed.

This politicization of science came with a body count.

States made policies explicitly prohibiting its use.

Lacking the authority to completely ban doctors from prescribing HCQ, some governors restricted pharmacies from fulfilling prescriptions to COVID-19 patients, but not to other patients. Notice that the rational policy to deal with shortage would have been to limit dispensed quantities of HCQ to everyone. This would have ensured that all patients receive the drug. The effect of the inverted policy was suffering of COVID-19 victims, stockpiling of the drug by users with 90-day prescriptions, and increased shortages. New York and Michigan outright banned dispensing HCQ to COVID-19 victims, with rare exceptions, and allowed stockpiling by other users. Apparently, when pharmacies in New York ran out of HCQ, lupus patients raided neighboring states.

Some states did not ban, but created obstacles for COVID-19 victims, like the requirement that the patient tested positive for COVID-19 (when the availability of tests was limited). In the best case, the result was delay of HCQ treatment, sharply decreasing its anti-viral efficiency.

NY’s policy on HCQ fulfillment was probably the worst (score: 10):

No pharmacist shall dispense hydroxychloroquine or chloroquine except when written as prescribed for an FDA-approved indication; or as part of a state approved clinical trial related to COVID-19 for a patient who has tested positive for COVID-19, with such test result documented as part of the prescription. No other experimental or prophylactic use shall be permitted, and any permitted prescription is limited to one fourteen-day prescription with no refills.

We note that these are the same states that had some of the worst fatality rates.

Trump on hydroxycloroquine: “If anyone recommended it other than me it would be used all over the place. I think the fact I recommended it set it back a lot.” pic.twitter.com/DWaCztMNkg

Ouch. It looks like President Trump was as right. Again.

The media fearmongered over the now retracted study from the Lancet that showed Hydroxychloroquine was dangerous to covid patients. pic.twitter.com/myKihDkYbj

The same people who tried to call this the Trump Virus all publicly dunked on the most viable treatment we’ve got yet.

It is time those people who were so desperate to hang this virus around Trump’s neck like an albatross be made to wear it around their own. It isn’t Trumpvirus… but it just might be DemVirus.