Does this seem a little harsh to you? Or do you think the authorities are getting ahead of a problem?

Let’s set up the bigger issue before we move to this specific incident.

Since the justifiable outrage about the death of George Floyd, certain political forces have been doing very well in pushing forward their political agendas.

We have seen cities set on fire, police injured and even killed, and businesses looted — only to have the folks who did it rewarded with having their demands given to them.

Sections of major cities are being ‘occupied’ by people who do not recognize the authority of our nation’s laws, who chase away the police, and who have let shooting victims bleed out, rather than letting emergency services tend to them properly.

They have been rewarded by leftist politicians by being given ‘space to destroy’ and by painting their political message prominently on buildings and streets.

It just so happens that what is being celebrated as a movement pushing equality is, in fact, a movement that has an extremely far-left political agenda, one that is antithetical to all of our historical traditions and institutions.

The self-described trained Marxists who founded the political movement “Black Lives Matter”, and who are admirers of a cop-killer that fled to Cuba.

It might be hardly surprising that not everyone likes what that movement stands for. Unfortuntatly (and intentionally) they have draped themselves in a very innocuous-sounding name.

Anyone who opposes the group and their agenda — which just ‘happens’ to be taking in millions of dollars in an election year which would undoubtedly be used to the benefit of one party and the detriment of the other — is conveniently deemed a ‘bigot’.

No proof is offered, nor is any required. How ‘else’ could anyone oppose such a fair-minded movement, right? (See the shell game they’re playing? They have created a demonically elegant catch-22.)

Someone painted the political message, Black Lives Matter, on the street. Someone else painted over it.

How "Law and Order" of them pic.twitter.com/jaDlTH7XZT

After an investigation, ‘hate crime’ and other charges were filed against them.

BREAKING: The #Martinez couple caught on video painting over the approved #BlackLivesMatter mural on #FourthofJuly are being charged with a hate crime, according to a release from the #ContraCostaCounty District Attorney's office. pic.twitter.com/9L21byNsE1

If you watch in the video, the man literally says ‘your life matters just as much as mine’. Which seems kind of an odd thing to say if you ‘hate’ people. He also condemned the wrongful death of George Floyd. Another weird position for a bigot to take, one might think. 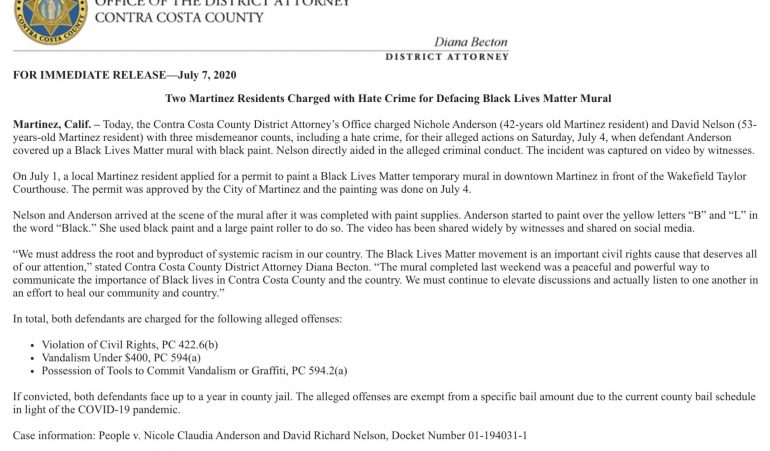 In some cities, practically every vertical surface has been ‘tagged’ with disgusting and violent rhetoric defaming the police and contributing to a dangerous work environment for them.

But objecting to a Marxist political message being painted on the street is a hate crime?