Adam’s apple, Achilles tendon, and even Fallopian tubes could get new nomenclature if this doctor and her colleagues get their way.

Australian doctors want people to stop using names of body parts that were given in honor of “men, kings, and gods” and instead use less sexist and outdated terms.

This seriously is a real thing that is happening in Australia right now.

It should be noted that there has been a push for years to rename female body parts that have been named after men.

It would be easy to take the Daily Mail article where this story was originally reported as satire since it contained this absolute gem of a sentence:

The Adam’s apple is believed to be named after the biblical figure of Adam – the first man created who then got an apple stuck in his throat.

Oh, that was a good one!

First off, that’s not what happened in the Bible despite the number of people on social media saying that it did.

Here’s your second daily reminder that just because it’s on the internet, that doesn’t mean it’s true. The term “Adam’s apple” came from the word for pomegranate.

Dr. Kristen Small is a specialist ob-gyn who is also an anatomy lecturer. She is leading the charge against medical eponyms–terms in medicine named after people. She’s determined to “decolonize” medical terms.

She believes the terms represent older generations and is pushing to use more practical and descriptive terms for body parts.

‘I think we have a personal choice to decolonise our language and these historical terms will fade out,’ Dr Small told the Courier Mail.

Dr Small said she makes sure her students still know eponyms for exam purposes and says there are always alternatives for the ‘dead man’s name’.

The Daily Mail article notes that it isn’t just body parts that have “problematic” names–medical equipment and procedures are also named in sexist ways after some very bad people.

…Surgical instruments and tactics are also named after men, such as the Pfannensteil incision, which was named after a man who published a paper on incisions in 1900.

The speculum – used by gynaecologists to perform a pap smear – was named after an American slave trader.

Would calling a “hysterectomy” a “uterectomy” make sense and add clarity? I guess it would in 2020. But, that’s because people don’t know Greek and are, generally speaking, highly educated buffoons… It seems the more contemporary “education” one has, the less one is able to comprehend classical thought.

What I object to strongly is the renaming parts for the hell of it because they bear the names of men. Often it’s the men who made advancements in the understanding of those particular parts.

Here’s just a sample of the “outdated” and “misogynist” body parts: 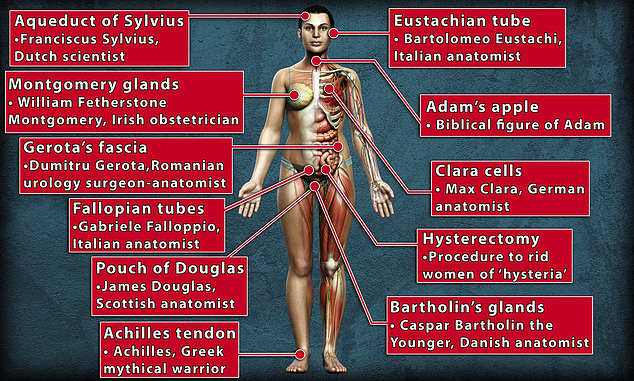 Of the more than 700 body parts named after individuals, just a handful are named after women. This is really the crux of the issue.

It is now “problematic” to even acknowledge the advancements and discoveries of men. Some of them were great men, some were decidedly not great, but they still contributed to the advancements in our understanding of anatomy and medicine. Should we toss them aside now that we’ve benefited from their research and knowledge but don’t care for their political views? Is this just another example of erasing anything that gives a nod to someone male? It sure does look that way.