Oh, look at that! How convenient for the anti-Christian leftists pushing interminable lockdowns.

A list of activities ranked by risk for contracting COVID-19 has been compiled by the Texas Medical Association. On the list, one of the activities with the highest risk is “attending a religious service with 500+ worshippers.”

Also on the list of “highest risk” activities are attending a large music concert, going to a sports stadium, and spending time in a bar. Activities that were not quite as dangerous but still within the high-risk category include eating at a buffet, working out at a gym, going to an amusement park, or going to a movie theater.

The moderately-high risk activities include going to a hair salon or barbershop, eating inside a restaurant, attending a wedding or funeral, traveling by plane, playing basketball, playing football, hugging or shaking hands when greeting a friend.

The lowest risk activity on the list was opening the mail.

Going to a bar or attending a church with more than 500 people poses a much higher risk of contracting coronavirus than opening the mail or getting takeout, according to a list of activities ranked by Texas doctors.

The Texas Medical Association, which is made up of 53,000 physicians and medical students across the state, released the list that ranks how risky an activity is regarding COVID-19 on a scale of one to 10…

…The medical professionals who compiled the list ranked each activity based on the ability to social distance.

‘The levels are based on input from the physician members of the task force and the committee, who worked from the assumption that – no matter the activity – participants were taking as many safety precautions as they can,’ the TMA said.

Also on the list of low-risk activities are getting restaurant takeout, pumping gas, playing tennis, and going camping. The low-moderate risk activities include grocery shopping, going for a walk, run, or bike ride with others, playing golf, staying at a hotel for two nights, sitting in a doctor’s waiting room, going to a library or museum, eating outdoors at a restaurant, walking in a busy downtown, and spending an hour at a playground.

Moderate risk activities listed are having dinner at someone else’s house, attending a backyard barbecue, going to the beach, shopping at a mall, sending kids to school, camp, or daycare, working a week in an office building, swimming in a public pool, visiting an elderly relative or friend in their home. 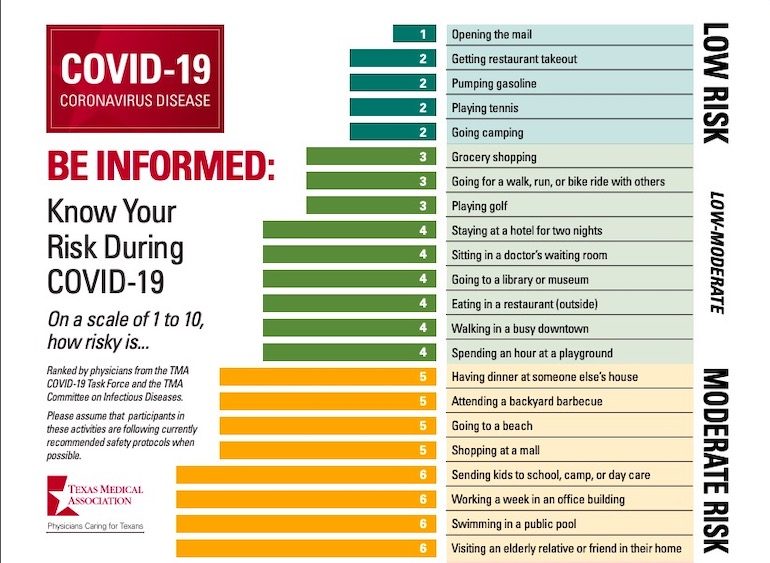 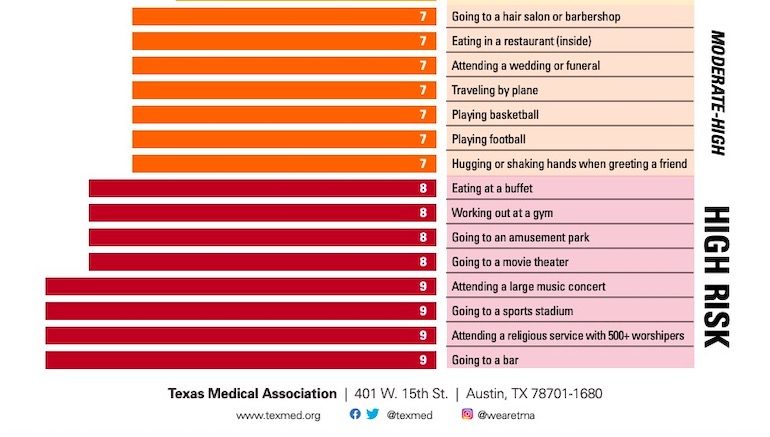 Sure, being in an enclosed space with 499+ other people could indeed be an opportunity for the virus to spread, but what is telling is what the list doesn’t include–no mention of gatherings of hundreds or even thousands for protesting the death of George Floyd, Black Lives Matter protests, groups committed to “anti-racism” statue-toppling, or Pride parades.

The list also fails to include religious services with fewer than 500 people, nor does it include the option of outdoor services that some churches are currently doing.

Not every church is a mega-church, and some could stagger services to an appropriate number of worshippers, but the Texas Medical Association doesn’t mention what that number could be. Is it 10? 50? 100? 200? It’s just easier to lump all religious services together in the highest risk category and not give any sort of guidance whatsoever. That way they can’t be wrong.

Jesus didn’t say to hide under a bushel. I distinctly recall Our Savior saying that we are to lay hands on the sick–not “socially distance” from them. I know that’s not politically correct, and that could get us labeled “fake news” but that’s the truth. Jesus touched lepers when He was schleppin’ this pebble. Lepers. These were people shunned and put in quarantine because the disease was believed to be highly contagious. They were considered “unclean” under the Law and touching something unclean made the toucher unclean. And yet, Jesus did it.

Now, I’m not advocating that we go find someone with COVID and give ’em a bear hug, but what I am saying is that our own natural instincts to preserve our own health along with our Christian compassion and concern for our fellow man have made us susceptible to be cowed and beaten down to accept what the “experts” have advised even if they say that we need to stay away from church indefinitely.

But that’s not what the Bible says.

Hebrews 10:24-25 says, “And let us consider how to stir up one another to love and good works, not neglecting to meet together, as is the habit of some, but encouraging one another, and all the more as you see the Day drawing near.”

As I said, the truths of scripture aren’t exactly politically correct, and will probably be considered “dangerous disinformation” during a pandemic. But the “experts” have been wrong time and again, and at this point, you could ask 10 “experts” and get 7 different answers. Just look at the mask directives, travel restrictions, and the use of hydroxychloroquine.

So, le’ts do one more thing that the Bible suggests–be as wise as serpents and harmless as doves. Be judicious. Go Berean on the COVID info. Keep an eye on not just the rising case counts, but also the hospitalization and death rates in your area.

And while we do that, take the opportunity to spend some extra time getting closer to the Maker of Heaven and Earth.

Here’s a great Bible study that takes a very different view of Jesus than the one that you’re used to.