Terry Crews is being jackhammered by the left for speaking the unspeakable–the black actor isn’t a fan of BLM.

The beloved Brooklyn 99 actor is pretty clear that he’s skeptical about the motives of Black Lives Matter as an organization.

In June, Crews tweeted out some pretty basic criticism of the new rush of BLM protests. He wrote, “Defeating White supremacy without White people creates Black supremacy. Equality is the truth. Like it or not, we are all in this together.”

Like it or not, we are all in this together.

He was blasted on Twitter for this and the replies are not even worth looking at. It’s a bunch of pro-leftist/socialist/BLM activist/All Cops Are Bastards/Black people are systemically oppressed kind of stuff. The usual.

But Crews didn’t back down.

He’s on a mission that is one of unity. It’s a beautiful thing. It’s the same sort of message that Rev. Dr. Martin Luther King Jr. was promoting.

If you are a child of God, you are my brother and sister. I have family of every race, creed and ideology.

We must ensure #blacklivesmatter doesn’t morph into #blacklivesbetter

The pro-BLM folks are having a big problem with a celeb of his stature being so vocal and deviating from the script.

He’s being called all sorts of things and being told to shut up.

Crews, being the completely awesome guy that he is, has decided that he’s willing to “die on this hill.”

Are all white people bad?

Are all black people good?

Knowing this reality- I stand on my decision to unite with good people, no matter the race, creed or ideology.

Given the number of threats against this decision-

I also decide to die on this hill.

He’s also pointing out the hypocrisy of the BLM movement, which has focused on only a handful of black lives, while black children are being killed.

9 black CHILDREN killed by violence in Chicago since June 20, 2020

His criticism of BLM is what got him to appear on CNN to be berated by the Dumbest Man On Television™.

During the interview, Crews makes the point that BLM has stated goals that are far more expansive than just police brutality.

Lemon gives away the game at one point where he says that BLM is about equality. Well, that doesn’t sound like it’s a one-issue movement, does it?

The Black Lives Matter website itself states that it is far more exhaustive than just about police brutality against African Americans. Here is a screenshot from the BLM website of the “issues that matter” for the 2020 election. 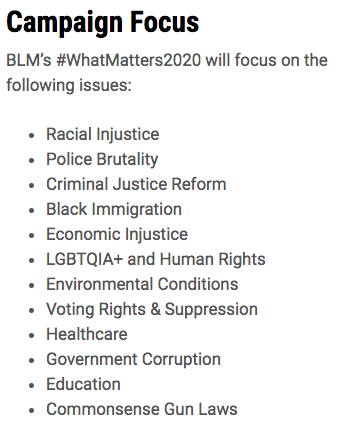 Surely they could take a moment aside from advocating for LGBTQIA+ rights, which already has a large, effective lobby, deal with the shooting deaths of black children?

At one point, Lemon condescendingly tells Crews to grow a thicker skin.

Watch how Don Lemon doesn’t let Terry Crews make his point that BLM is bigger than just a movement opposed to police brutality.

As for the criticism of BLM, well, their own website is far more encompassing than just one issue–it’s a political movement. ClashDaily covered that here:

But even though yours truly was called racist for pointing to the BLM website and quoting their own words, here, without comment is one of the founders, Patrisse Cullors, explaining that she, along with another of the founders, are both “trained Marxists” who were community organizers and the movement does indeed have an “ideological frame.”

Take that as you will, but don’t blame me this time.

Terry Crews isn’t the only black man who has noticed that BLM is a political movement.

Here are sports reporters Marcellus Wiley and Emmanuel Acho discussing the NBA plan to have “Black Lives Matter” painted on the courts. Wiley is not a fan of this move and he makes his thoughts pretty clear.

.@MarcellusWiley breaks down why the NBA’s plan to paint ‘Black Lives Matter’ on courts is a bad idea. pic.twitter.com/EoCJNf7ho1

Meanwhile, on Twitter, users calling out Crews are proving his point, and he’s pushing right back.

Spoken like a true supremacist. So the only Black lives that matter are the ones that agree with you?

You are proving my point, sir. https://t.co/y3ij8GXnTu

Where I grew up, I knew a lot of people who were too afraid to turn in the criminals in their own hood–they knew there would be swift retaliation. Black people are not pro-crime. They are being held hostage.

We can't move from one oppressor to the other– regardless of color. https://t.co/4AdZO4AnyR

Obviously not Godfrey. I'm African American if you haven't noticed. Why are you discussing this as if I'm not black? Love you by the way…! https://t.co/O7YazlyQYM

And right here is the tweet that lets you know that Terry is correct. Blatant racist Talbert Swan is opposing him. (Scroll through Swan’s Twitter feed sometime if you don’t believe that he’s blatantly racist.)

I see #TerryCrews out here ‘all lives mattering.’

What is #BlackLivesBetter Terry? Who is out here saying that?

Because Black people want to live, not be shot on the streets like animals, and be treated fairly, means we think we’re better?

What the hell is wrong with you?

Yeah, I’d be ok with Talbert Swan asking, “What the hell is wrong with you?” about my views. So should Terry Crews.

Because Crews saying the same thing as this guy, and it’s a message that BLM activists really, really need to hear.

This Week’s Anti-Israel Attacks Wouldn’t Have Happened Under Trump
May 14th, 2021 Flag And Cross

Did Cancel Culture Boomerang, Hitting A Hollywood Elitist In The Wallet Or Nah?
May 14th, 2021 Clash Daily

This Woke US Army Ad Will Make Your Blood Boil (Video)
May 14th, 2021 Conservative Firing Line