Nobody said ‘boo’ about the marches, or the funerals of John Lewis and George Floyd. But let a meeting be religious rather than political, and people lose their minds.

Does anyone seriously doubt that the virus is being explicitly politicized?

But political events that have been used as a pretext for violent uprising? Those are expressions of First Amendment rights, too.

Since May 31, the Newbury Park church has held large, indoor services without masks or social distancing every Sunday. Ventura County health authorities sued Godspeak and McCoy on Wednesday.

“The Constitution is not a suicide pact. The exercise of individual liberties has to be consistent with public health, otherwise the one would cancel out the other,” Judge Matthew Guasco said, according to the Thousand Oaks Acorn.

County Public Health Director Rigoberto Vargas said health guidelines must be followed so that business and schools can resume and “the most vulnerable in our community can be spared from the disease.”

The temporary restraining order will remain in effect until Aug. 31, when another hearing on the lawsuit is scheduled.

…“It is only a matter of time — if it has not already happened — before there is a significant outbreak of COVID-19 cases among the attendees,” said county Health Officer Robert Levin, who is listed as a plaintiff in the suit. The lawsuit came after members of the Ventura County Board of Supervisors voted 3 to 2 this week to use court actions to enforce COVID-19 health orders.-MSN\

The ‘First Amendment is not a suicide pact’ line is an interesting one. So is the line about ‘it’s only a matter of time before … significant outbreak… among attendees’.

The spread still happens in the political crowds that are so carefully by First Amendment considerations. Like in this Portland story:

Ethan Snyder says he had been out with protesters for seven days at the beginning of June.

Then last Friday, the 19-year-old started feeling tired and had a fever.

He went to a drive-thru testing facility, and it was confirmed he contracted coronavirus. — MSN 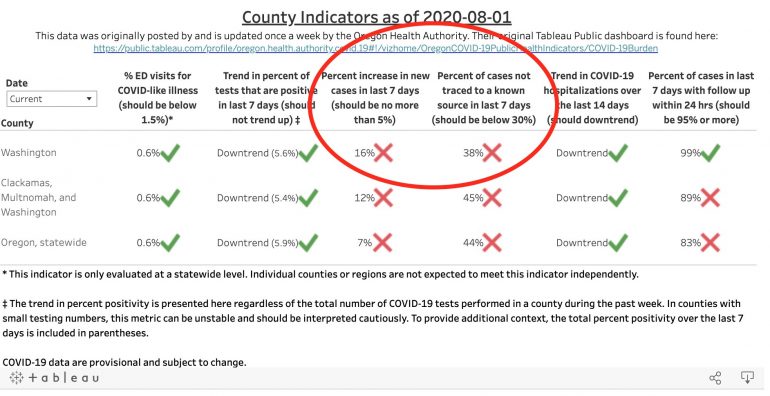 So courts and politicians are prioritizing shutting down churches.

But they are defending politics as an expression of Constitutional rights.

‘Significant Outbreak among the attendees’ is the argument for abridging their Constitutional rights.

But nobody would DARE make that same argument in the face of statistical spikes in places where there is a correlation (like Portland and Seattle) between the political activism and the spike.