According to Chicago Police, the looting that began late Sunday and continued overnight was coordinated on social media and there were even reports of a U-Haul truck as the looting continued for hours. Police made over 100 arrests and 13 officers were injured overnight.

And it all began because of a mid-afternoon officer-involved shooting of a black man in the Englewood neighborhood of Chicago. According to heyjackass.com, Englewood is listed as one of the “Deadliest ‘Hoods” because of the number of homicides. 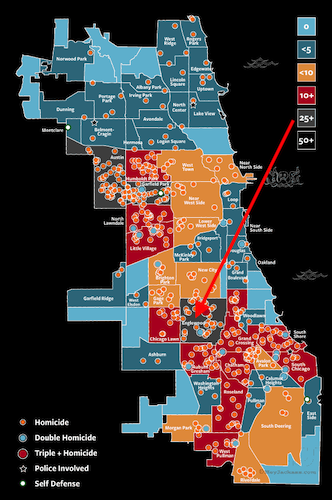 On Sunday, Chicago police were called to Englewood at around 2:30 pm with the report that there was a man with a gun in the area. Officers found a man who matched the description and attempted to confront him. He ran off and as he did, he took out a firearm and shot at the police. Officers returned fire and the offender was shot and taken to the hospital and is expected to survive. 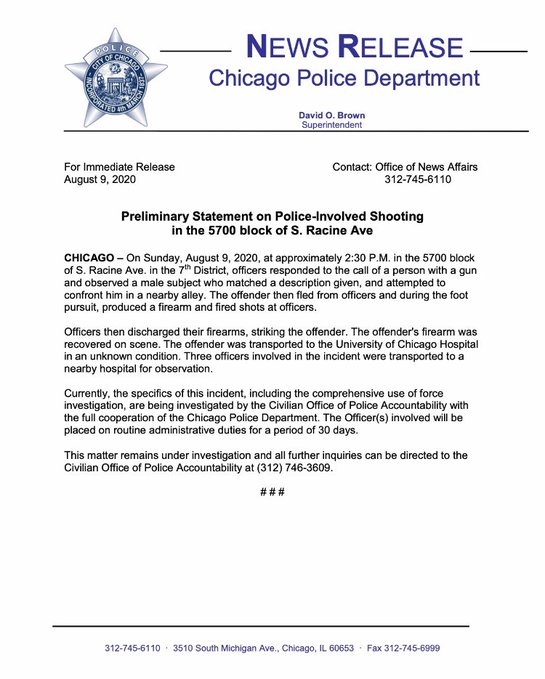 As is the case with all instances when an officer discharges his firearm, the situation is under investigation.

Of course, the crowd came to their own conclusions because every single time an officer shoots a suspect it’s now because of racism. Thanks, Media(D).

Crowds began to gather in the area where the shooting took place.

The scene near 57th and Aberdeen following a police involved shooting in Chicago. pic.twitter.com/x40t5V1xF0

A photo of the offender’s gun that was recovered at the scene was shared on social media.

Offender’s firearm recovered by police after firing at Officers. Officers returned fire striking the offender. Offender transported to U of C Hospital. pic.twitter.com/UQPmfP3a35

At a presser today, the shooter was a 20-year old man who was, as the lingo goes, “known to police.” The offender had 4 previous arrests with charges including burglary, child endangerment, and domestic battery. (Boy, he sounds like a wonderful individual, doesn’t he?)

But social media posts started to spread online to organize large gatherings downtown. Authorities in Chicago don’t regard this as organizing a “peaceful protest” but instead opportunistic criminal activity.

During the chaos, there were shots fired at Chicago PD.

Hundreds of people smashed windows, stole from stores and clashed with police overnight in Chicago's Magnificent Mile shopping district and other parts of the city's downtown. https://t.co/HrDCLtBUXd pic.twitter.com/sanXXVYGx2

Macy’s, Apple, and other high-end shops were looted.

The peaceful demonstration “intensified” into smashing and looting–at least, that’s how ABC News would report it.

AOC said that crime is up because criminals were just hungry and stealing loaves of bread. This woman thinks she’s living in the midst of Les Misérables.

One conservative pundit asked her if Louis Vuitton or Prada had better bread.

Mayor Lightfoot is scheduled to address the looting in a press conference at 8 a.m.

Earlier this morning, Alderman Brian Hopkins told us:
"The Mayor needs to address the city. Enough breaking up parties on the beach. That isn't our problem right now" pic.twitter.com/D4thxkQNqo

The chaos continued throughout the night and was so bad that the bridges heading downtown were raised and the Chicago Transit Authority suspended their services.

All bridges heading into downtown except for Lasalle are up. State Police checking ID’s again to get access downtown on expressways. Streets and San trucks blocking many roads. CPD confirming looting is still “not contained.” pic.twitter.com/GYKiEgx86z

One Chicagoan, Jeff Blehar who co-hosts National Review’s Political Beats podcast was tweeting about the situation this morning.

I don't think people who aren't in Chicago realize how nuts this is. The area that that got "flash-mob" looted yesterday is the absolute heart of the commercial/tourist downtown. They targeted the high-end stores intentionally. This is lawlessness on a wild-West level scale.

Folks, people were arriving with multiple empty shopping bags and bringing *U-HAULS* to the Loop and the Gold Coast last night/this morning. It wasn't 'protest', it was a coordinated raid using the guise of protest for outright thievery.

All this while the derelict Mayor of Chicago has allowed the city to become an even worse hellhole than it was before.

Mayor Lightfoot has been criticized for her excuses for large BLM protests while condemning other large gatherings. On the weekend she blocked off access to the lakeside district because of a large LGBT gathering there citing the pandemic. 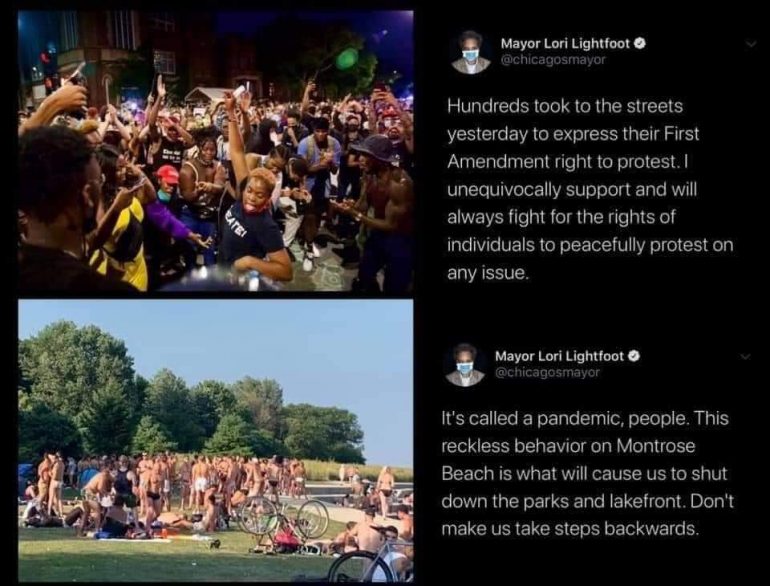 Remember, Lightfoot got very huffy when she was called “derelict” by the White House Press Secretary.

But now it looks like the derelict mayor of Chicago has been mugged by reality. (Or maybe she realizes that allowing crime to run rampant isn’t so great for her chance at re-election.) Whatever the reason, it’s nice that she’s finally taking notice that crime should be punished and that police officers shouldn’t face abuse because they wear a badge.

To her credit, she’s openly been advocating for police reform and has openly defended police rather than supporting defunding like her Democrat comrades.

Kudos where it’s due.

This is a good first step in Mayor Lightfoot getting her crap together and taking care of the city that she is in charge of, but she’s got a long, long way to go.